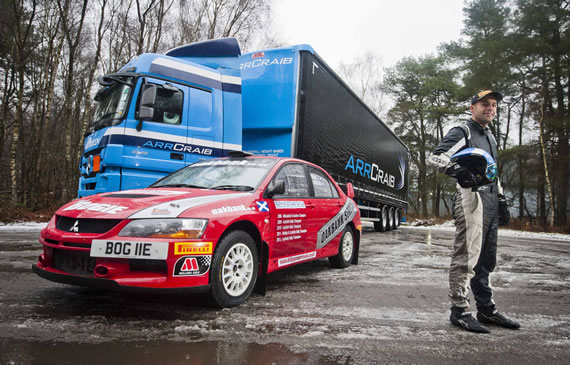 ARR Craib Transport Ltd  one of the UK’s leading providers of transport and logistics services  has been unveiled as the title sponsor for the 2013 MSA Scottish Rally Championship. The partnership strengthens ARR Craib’s commitment to raising the profile of motorsport nationally, building on its current sponsorship of a single stage in the Granite City Rally in Aberdeen.

The Scottish Rally Championship comprises eight exhilarating events and launches this year with the Snowman Rally, based in Inverness, on 16 February. Around 100 drivers, navigators and their support crews – watched by thousands of spectators – will tackle gravel forestry tracks and closed road tarmac during the course of the season in a bid to take the overall championship crown.

All eyes will be on Dumfries-based driver David Bogie, winner of the last four championships with co-driver Kevin Rae, to see if he can set a new record by finishing top of the podium for a fifth year running.

Eddie Anderson, managing director of ARR Craib, says the firm is proud to be involved in what will be an incredibly exciting year for the sport in Scotland. He adds, “The Scottish Rally Championship is undoubtedly one of the most thrilling motorsport series in the UK. The standard of competition is second to none and it has proved to be a breeding ground for exceptionally talented drivers.

“It should also be remembered that The Scottish Rally Championship is not only a fantastic sporting success but also plays a very important role in the economy of the local areas where each of the eight rallies are held.

“As a transport company we feel that we have a something of an affinity with motorsport and as a consequence we wanted to strengthen our association with the championship, which started a few years ago through sponsorship of a stage on the Granite City Rally.

“We hope that our involvement as title sponsor will give the organisers the support and assistance they need to underpin the work they do in providing a first-class contest for both drivers and motorsport fans.”

Dave Robson, chairman of the Scottish Rally Championship, says, “We are delighted to welcome ARR Craib as title sponsor for the coming season. Transport and logistics go hand in hand with rallying and continually prove to be successful partners.

“Over 500 competitors, officials and supporters attended our recent Awards Ceremony in Aberdeen, demonstrating the strength of the championship and its popularity. Eddie Anderson clearly shares that enthusiasm and we look forward to working with him and his team to take the series forward through an exciting year.”

ARR Craib is headquartered in Aberdeen, and has bases at Cumbernauld in Central Scotland and Eaglescliffe in the North of England. The company operates a fleet of more than 250 vehicles and 500 trailers, and provides transport and logistics services within local, radial, UK and international markets.

Dumfries-based driver and current title holder David Bogie will be one to watch in the 2013 ARR Craib Scottish Rally Series as he bids to claim his fifth consecutive championship.