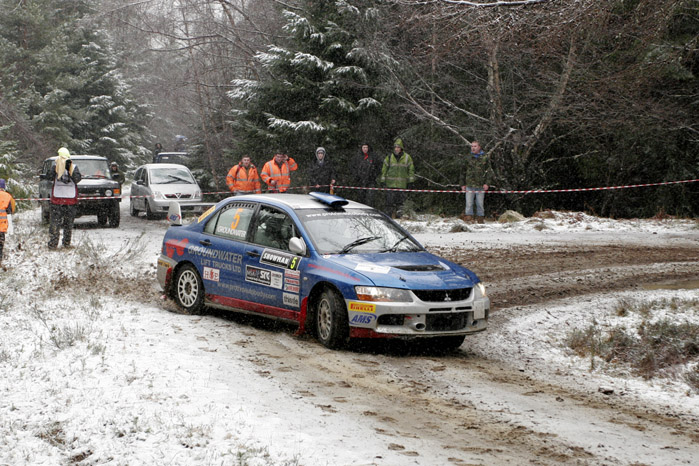 Defending champions David Bogie and co-driver Kevin Rae head an impressive entry of more than a hundred crews for the opening round of the 2013 MSA ARR Craib Scottish Rally Championship in Inverness on Saturday, 16th February.

The difference this time is that Bogie will be behind the wheel of a newly-acquired Ford Focus WRC ’02, having retired his faithful Mitsubishi EVO 9 at the end of last season.

During the past few weeks, the Dumfries-based driver has been familiarising himself with the ex-Colin McRae car – and, in particular, the switch to left-hand drive.

He will go head to head on the Highland forest stages with Euan Thorburn, who debuted his ’01 spec Focus WRC on the “Snowman” twelve months ago, alongside Inverness-based co-driver Paul Beaton. It took the Borderer several rounds to learn the traits of the car, but from mid-season he increasingly put pressure on Bogie.

Third seed Jock Armstrong – winner of the Snowman Rally in 2010 – will be targeting a podium spotin his Subaru Impreza. The Castle Douglas driver and navigator Kirsty Riddick only contested three SRC rounds last season, but finished in the top three on each occasion.

“We plan to do the full championship this year, and see what happens”, said Armstrong: “It won’t be easy with David and Euan out in WRC cars, but we’ll certainly be trying”.

Mike Faulkner, who was runner-up in Inverness last year, and finished second overall in the championship, also has a “new” car, after putting his Mitsubishi EVO 6 up for sale.

“It’s David Wilson’s old EVO 9, which is effectively a Group N spec, but we’ll run it in the open class”, said Faulkner, who will have long-time navigator Peter Foy on the notes: “It’ll take us a while to get the car to how we want it, but it should be a step forward”.

“I think it will be a case of trying to stay as close as possible to Euan and David and hopefully pick up the pieces if they have problems”, Faulkner added: “The SRC is a long tough series and if we can stay consistent, then we may just be in with a shout by the time we get to the last round”.

Faulkner and Foy will be followed off the start line by another experiencedSRCcrew: Barry Groundwater and Neil Shanks, also in an EVO 9. The Stonehaven driver was sixth on the “Snowman” in 2012 and went on to finish fourth overall in the end-of-season points.

The only Group N car among the leading entries is the Subaru Impreza N15 of John McClory and David Hood, who will be aiming to continue their remarkable run of consistency from last year.

They chalked up seven top-ten finishes – including a fifth-place on the “Snowman” – and ended their campaign third and fourth in the drivers’ and co-drivers’ points respectively.

Banchory’s Quintin Milne bagged his first ever SRC win on the Colin McRae Stages in October and will be pushing for a podium in his Mitsubishi EVO 9. He was running as high as second on the opening round last year before the gremlins set in.

The “Highland” challenge will be led by Inverness-crew Donnie Macdonald and Andrew Falconer from Inverness in an Evo 9. A retirement on last year’s “Snowman” was a blip in an otherwise solid campaign, which resulted in Macdonald finishing sixth in the overall standings.

2009 Snowman winners Reay Mackay and co-driver Robert MacDonald from Fort Augustus return to their local stages in a Subaru Impreza WRC. They too were forced to pull out early last year with engine problems.

The top ten is rounded off by Chris Collie and Lisa Watson in a Mitsubishi EVO, who will be looking to make amends for an “off” twelve months ago. The Aberdeenshire crew went on to string together a good run of results mid-season.

There will be a good deal of home support for Andy Horne, who makes a welcome return to the SRC, after more than a year away, in his ever popular DAM 4100 Gti. The Inverness-based driver was fifth on the Snowman in 2011, alongside co-driver Jim Howie from Kilmarnock.

Dumfries farmer Rory Young and Carlisle-based navigator Allan Cathers will also be back in action following a big accident on the RSAC Scottish last June, which wrecked their Group N EVO 5.

“Allan is a brave man. There’s no holding us back!”, said Young, who was fourth overall twelve months ago: “The car has had a full body rebuild and looks like new. Dom Buckley’s team have done a great job”.

The 2-wheel drive challenge is headed by David Wilson, co-driven by Dave Robson, in his Ford Escort Mk2. The Alness-based competitor will go head to head for Class 8 honours with the Escort of Uig’s Malcolm Buchanan, co-driven by Ian Nicoll from Forfar. To add to the Mk2 “mix”, Eddie O’Donnell Junior is making the trip over from Mull with navigator Matt Radcliffe.

The 1600cc category sees battle rejoined between the Honda Civics of Lanarkshire rivals Graeme Schoneville, co-driven by Michael Hendry, and Graeme Smith, who will have Laura Marshall on the notes. Paisley’s Alasdair S.Graham will also be aiming for class honours in his Vauxhall Corsa, accompanied by navigator Laura Stuart from Alford.

As always, the Snowman entry list boasts a wide and diverse collection of cars – not least the Ford Anglia PWRC of Allan MacKay from Brora. Ken Wood fields his immaculate Triumph Dolomite and Robert Harkness from Ayrshire will be out in his BMW 316. There are also several Talbot Sunbeams and Skodas.

The action gets underway at 9am on Saturday, February 16th when the cars leave from the start line outside the Thistle Hotel in Inverness.

Full details can be found at www.snowmanrally.co.uk

For SRC news and updates go to www.scottishrallychampionship.co.uk