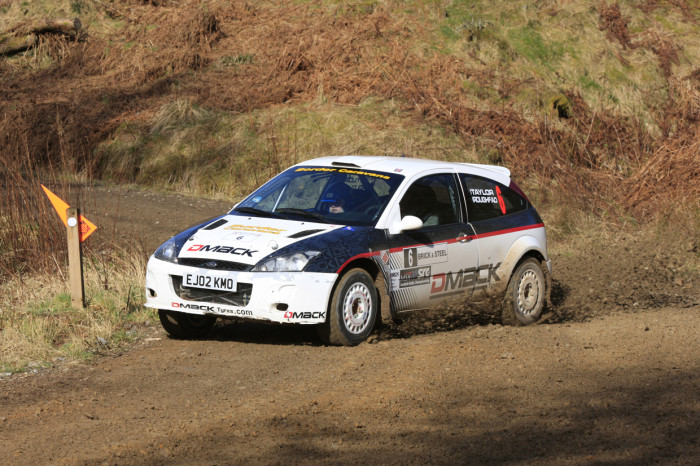 The pair are pushing for an unprecedented fifth straight title in the ARR Craib MSA Scottish Rally Championship.

However, Bogie is still getting to grips with his ex-Colin McRae Ford Focus WRC, and Euan Thorburn – with a year’s experience of his Focus behind him, plus an impressive win on the Malcolm Wilson Rally earlier this month – will be keen to build momentum.

Having won last year’s Jim Clark Reivers, the Duns driver, with Paul Beaton from Inverness on the notes, is targeting top honours on his other “home” rally – five years on from his dad Ali’s victory in a Subaru Impreza.

Mike Faulkner and Peter Foy – runners-up twelve months ago – will be eyeing a podium place in their recently-acquired Mitsubishi EVO 9.

“The Kielder stages are fast and flowing and they’re great stages to attack, “said Faulkner: “Commitment levels have to be high with fast roads and big ditches which reward the brave. The top ten seems to keep getting stronger and stronger, and while Euan and David will be hard to beat, there are a whole host of drivers now that could come away with a top five result headed up as ever by Jock Armstrong”.

Having missed out on the event last year, fourth-seed Armstrong returns to the Border Counties intent on a strong placing in his Subaru Impreza, following two non-finishes in 2010 and 2011. The Castle Douglas driver and navigator Kirsty Riddick only contested three SRC rounds last season, but finished in the top three on each occasion.

The Border Counties has attracted a strong “Highland” contingent, led by Donnie Macdonald, co-driven by Andrew Falconer, in an EVO 9. Andy Horne, with Jim Howie navigating, is also seeded in the top ten in his DAM 4100GTi. The pair finished fourth overall in Jedburgh two years ago.

Cumbrians Paul Benn and Richard Cooke could pose a threat in their Ford Focus WRC, while event sponsor John McClory, with David Hood on the notes, will be the man to beat in the Group N category in his Subaru Impreza N15. He finished eighth last year, signalling the start of a consistent run of results which took him to third spot in the drivers’ championship.

Slightly further back in the starting order, there’s added interest with the entries of Welshman Tom Cave – who finished second in the British championship in 2012 – and fellow BRC regular Desi Henry from Portglenone in County Antrim – both in 1600cc Citreon DS3’s. Desi’s brother Niall is also making the trip over, and will tackle the Border stages in a Subaru N12.

Duns’ Dale Robertson, co-driven by Paul McGuire, will be keen to impress in front of home support in his EVO 9, while international co-driver and former Border Counties winner Claire Mole from Kelso will sit alongside rally preparation expert Wayne Sisson, also in an EVO.

Others to watch include BTRDA “hotshot” Matthew Robinson from Ripon in his 2.5 litre Ford Escort, while Eddie O’Donnell Jnr, in an Escort RS, makes the trip over from the Isle of Mull for the second year running.

Cars in Classes 1-7 will run at the head of the field, led by Kielder “maestro” Steve Bannister, co-driven by Hawick’s Louise Sutherland, in his historic-category Ford Escort. The pair come fresh from a class-winning drive on the Malcolm Wilson Rally. Fellow Yorkshireman Charlie Taylor, also in an Escort, starts a further two places behind.

Splitting the two is Irish R3 class champion Joseph McGonigle, with Ciaran Geaney on the notes, in a Renault Clio R3 Maxi.

As always there will be fierce competition across all the SRC classes, not least in the1600 cc category, where there is the usual diverse mix of cars. They include last year’s runners-up Malcolm Robertson and Katie Stimpson in a Talbot Sunbeam; Alnwick’s Carl and Robin Tuer in their MG ZR S1600; up and coming St Boswells’ driver Gareth White, in a Citreon C2 R2 Max; Lanarkshire driver Graeme Smith, co-driven by Laura Marshall in a Honda Civic; and Paisley’s Alasdair S.Graham, partnered with Laura Stuart, in a Vauxhall Corsa.

The Border Counties will be a first event for both Elgin-based Stuart Morrison, in a Talbot Sunbeam, and Perthshire’s Blair Brown, who will have highly experienced driver and navigator Steven Clark beside him in his Peugeot 205GTi.

Contrast that with two “old hands” who competed on the rally in 1983: the aforementioned Steve Bannister, and Ayrshire’s Robert Harkness, who back then was at the wheel of an Avenger GT, and next weekend will field his BMW 316i, alongside co-driver Mike Curry from Lockerbie.

The entry list for 1983 also throws up a family connection with the Border Counties which endures to the present day.

On Saturday, Car No 118 will be driven by Kieran Renton from Coldstream, with cousin Carin Logan of Kelso on the notes. Thirty years ago, Car No 133 was driven by Ian (Ginge) Logan – Carin’s father – and co-driven by Keiran’s dad Keith!

Event details and a full entry list can be found at www.bordercountiesrally.co.uk
Live results for the Border Counties Rally can be found at http://results.djames.org.uk/results/?e=226

Top Ten Seeds (Classes 1-7 – running at front of the field) with car no: