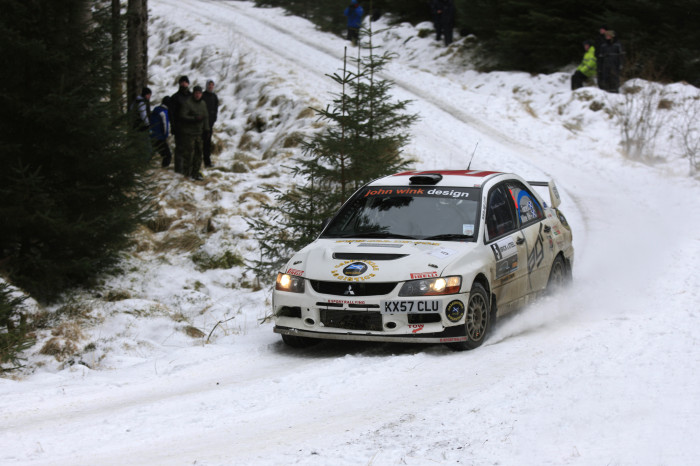 Co-driven by Martin Forrest from Aberdeen, Milne was fastest through three of the four special stages (the third stage was cancelled because of snow and access problems) to finish with a total time of 38 mins 27 secs in his Mitsubishi EVO 9.

Fellow Aberdeenshire driver Barry Groundwater, also in an EVO 9, was runner up, a further 1 min 07 secs further back, alongside navigator Neil Shanks from Elgin. The final podium spot went to County Durham’s Stephen Petch, co-driven by Michael Wilkinson, who was another nine seconds adrift in his EVO.

However, with Petch not registered for the SRC, it was defending champion and two times Border Counties winner David Bogie who took the championship points after bringing his Ford Focus WRC back to Jedburgh in fourth place overall.

With safety concerns uppermost, the rally organisers had decided to switch the running order and put the 4WD cars first, with classes 1-7 following on behind.

Milne, who won the final Colin McRae Stages round in 2012, did not have the best of starts – only managing seventeenth fastest after a spin on the opening Hyndlee stage. It was won by one of the pre-event favourities, Euan Thorburn, in his Ford Focus WRC, while fourth seed Jock Armstrong was an early casualty, beaching his Subaru Impreza.

The second test, Wauchope, saw Milne quickest – twenty-seven seconds ahead of Groundwater, who moved into the overall lead. Derbyshire’s Oliver Mellors – competing on his fourth event – was sitting third at this point in his Proton Satria Neo S2000, and Dale Robertson from Duns was twenty-three seconds further back in his EVO 9. Malcolm Wilson Rally winner Thorburn, with Paul Beaton on the notes, lost time after a spin and was down in ninth overall.

With the Craik stage cancelled, crews moved on to Bewshaugh, where Milne again posted the fastest time, fourteen seconds quicker than Bogie, who had been regretting wrong tyre choice – a critical factor given the changeable surface conditions. Petch was third fastest, and moved into third overall, while Groundwater – who was also having tyre problems – slipped back to fourth, ahead of the EVO 9’s of Donnie Macdonald/Andrew Falconer, and sixth-placed Mike Faulkner/Peter Foy, who had dropped a minute with a puncture on stage one.

The final Riccarton test was about whether Milne could keep his nose in front of the hard-charging Groundwater. In the event, the Banchory driver managed to slip and slide his car through in one piece to take the stage win by four seconds over his Stonehaven rival. At the conclusion, Petch was secure in third place overall, ahead of Bogie, MacDonald and Faulkner.

Event sponsor John McClory, co-driven by David Hood, ended a trying day by taking Group N honours in his Subaru Impreza N15, finishing seventh overall, while Aberdeenshire’s Chris Collie and Lisa Watson in a Mitsubishi EVO 6; Dougal Brown and Lewis Rochford in an EVO 9; and Andy Horne and Jim Howie in the DAM 4100gti were each separated by a single second in eighth, ninth and tenth places respectively.

The first 2WD car home was the Ford Escort of Steve Bannister and Louise Sutherland: the Yorkshireman taking the historic class win by more than two minutes from Charlie Taylor and Mick Johnston, also in an Escort.

Alwick’s Carl and Robin Tuer made sure of victory in the 1600cc category in their MG ZR S1600, finishing fifty seconds ahead of local crew Kieran Renton and Carin Logan in a Ford Fiesta R2.

Ross Macdonald from Conon Bridge, with Matthew Johnstone of Inverness on the notes, took top honours in Class 2 in their Vauxhall Corsa, while Dumfries and Galloway’s Iain Haining and Mairi Riddick, in a Vauxhall Nova, won Class 3 – ending the day with a three minute advantage over Lauder’s Callum Atkinson and co-driver Craig Forsyth from Kelso in a Peugeot 205 Gti.