Bogie Back on Top 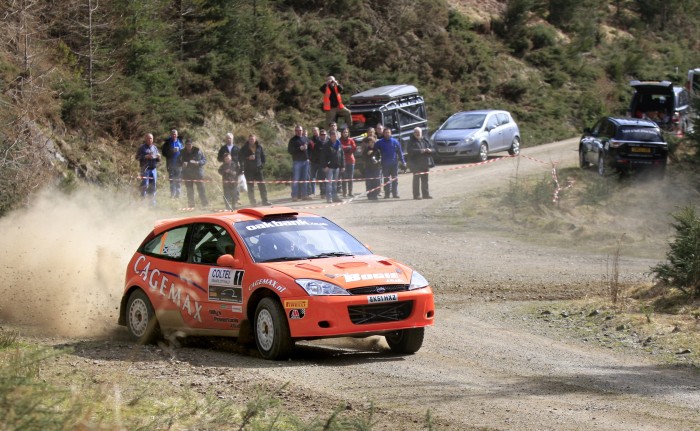 Defending champion David Bogie threw down the gauntlet to his challengers with an emphatic win on Saturday’s Coltel Granite City Rally – his third victory on the Aberdeen-based event in the past four years.

The Dumfries driver led from start to finish in his ex-Colin McRae Ford Focus WRC to complete the five stages in a total time of 42 mins 25 secs, nearly one and a half minutes ahead of runner up Chris Collie from Aberdeen in a Mitsubishi EVO 6. Third-placed Mike Faulkner was just a further second adrift in his EVO 9.

The result means that Bogie, co-driven by Kevin Rae, now leads the ARR Craib MSA Scottish Rally Championship by one point from Banchory’s Quintin Milne, who finished fourth in his EVO 9.

An early casualty was Duns’ Euan Thorburn – one of Bogie’s main rivals – who hit a rock on the first stage which flattened the exhaust of his Focus WRC.

Bogie, who was fastest through four of the five stages, said a good run through the first Fetteresso test helped set them up for the win:

“I felt comfortable coming out of the first stage and knew then that the rest would all come together. Obviously, losing Euan early on took a wee bit of pressure off us, but in all honesty I felt I drove well today. I’m happy with the way the car performed, we needed more time in the car, and we’re back to winning ways, so hopefully we can carry this on to the rest of the year and I’m sure the pace will increase”.

For his part, co-driver Rae was also well satisfied with the day’s work, particularly after the difficulties posed by the ice and snow on the previous round in the Borders:

“This is the first rally we’ve done in this car in what you’d call normal conditions – in fact the stages were fantastic. We’re definitely both more confident in the left-hand drive car, and coming through the last stage I had a huge grin on my face as I was reading the notes, because it all just clicked into place”.

Over the first three stages, Bogie traded times with Jock Armstrong from Castle Douglas in his Subaru Impreza. Five seconds adrift of Bogie after the first stage, Armstrong, co-driven by Kirsty Riddick, took two seconds out of the champion on the second Drumtochty test. Bogie hit back on SS3 Glenfarquhar and went into the service stop with a twelve second advantage over Armstrong. Border Counties winner Milne was a further thirty-seven seconds back, and Collie another six seconds adrift.

However, what was shaping up to be a close-fought battle at the front between the two south-west of Scotland competitors came to an abrupt end when, a mile into SS4 Durris, the engine of Armstrong’s Impreza blew up and split in two. The stage was won by Bogie, who was five seconds faster than Andy Horne in his DAM 4100GTi, while Barry Groundwater and Chris Collie were another two and three seconds back respectively.

On the final, and – at 12 miles – longest stage, Swanley, Faulkner was second fastest behind Bogie, leap-frogging Milne for third overall, with Collie third quickest and Groundwater fourth.

Collie, with Lisa Watson of Alford on the notes, was delighted with his first SRC podium: “I’ve been trying to be a little less erratic and more controlled which seems to have worked, although there were a couple of moments. When I saw Jock at the side of the road I knew we were in with a chance of the podium. So I just went for it, and luck’s been on our side today”.

Faulkner, co-driven by Peter Foy, had had an eventful run-up to the rally when the gearbox of his new EVO 9 failed during an SRC/ARR Craib sponsor’s event on Thursday. It resulted in one of Craib’s trucks bringing parts north from Lancashire-based  rally preparation expert Wayne Sisson. They were then fitted at Barry Groundwater’s premises on Friday morning, and the EVO was ready for – and passed – scrutineering later that day.

“The car and gearbox worked well, but unfortunately we had a spin on the first stage which cost us time”, said Faulkner: “The third stage was really good, we were on maximum attack to get the runners-up spot. We should be pleased with third, but after all that effort, we’re a bit gutted to just miss out on second spot by a second”.

Milne, winner of the Border Counties, admitted he threw away the chance of a podium place on the last stage, dropping two positions:

“I lifted perhaps eight times where there were some really rough sections where the road had been re-graded – some big sharp bits. But it was such a competitive top five, it was a fine balance. You couldn’t really afford to back-off, because, as happened, I lost two places very quickly. But, we’re still in there, and it was a decent points haul”.

Groundwater – second in the points going into the event – ended the day fifth overall in his EVO 9, alongside Neil Shanks from Elgin, with Invernessians Donnie MacDonald and Andrew Falconer sixth, also in an EVO.

“It’s been a day of two halves”, said MacDonald: “The morning stages went well for us, but we’ve had a really bad afternoon, and it’s a bitter pill to swallow, to be honest. It started to go wrong on the third stage, the steering wheel slipped out of my hands a few times – so I took my gloves off, and it was OK. Then we span again and I put on a new pair of gloves – but they were no use. I think it’s a problem with the steering wheel – it might need roughing up a bit. We’ve been in ditches, we’ve stopped, we’ve stalled – it’s been a bit of a nightmare”.

Meanwhile, Reay Mackay from Fort Augustus, with Stuart Louden co-driving, was happy to get a clean run and finish a rally for the “first time in two years” at the wheel of his Subaru Impreza WRC.

Alistair and Colin Inglis from Montrose finished a strong eighth place overall in their Mitsubishi EVO 5, with 2007 Granite winners Horne and navigator Jim Howie from Kilmarnock in ninth place in the DAM 4100GTi, a further five seconds back.

Mark McCulloch from Newton Stewart rounded off the top ten in his Subaru Impreza, alongside navigator Elliot Edmondson from Milton Keynes: “The car has gone very well apart from a turbo pipe problem which we managed to fix at service. It made a huge difference on stage four, but I think it went again on the last stage and we dropped a bit of pace”.

Wigtownshire duo Fraser Wilson and Steven Broll limped home in their Mitsubishi EVO 8 to take Group N honours “We snapped the exhaust on one of the rough sections, and then did the last nine miles of the final stage with no power-steering, no water pump and no alternator”, said Wilson. One of the pre-event favourites to take the GpN win, John McClory, had a rare non-finish after his Subaru Impreza N15 rolled on the opening stage.

Up and coming young Welsh driver Ossian Pryce was the leading 2WD competitor, finishing eleventh overall in his Citreon DS3, two places ahead of Banchory’s Calum Mackenzie, co-driven by Neil Ewing of Largs, who took top honours in Class 8 in his Ford Escort Mk 2.

Alex Pirie from Drummuir and David Law of Huntly made sure of Class 2 in a Toyota Yaris, while Dumfries and Galloway’s Iain Haining and Mairi Riddick dominated Class 3 – their second consecutive victory – in a Vauxhall Nova.

Glasgow’s Grant Inglis and Robert Gray were winners of the 1600cc class in a Honda Civic, finishing twenty seconds ahead of Dalbeattie’s Iain Wilson and Keith Fremantle in a Vauxhall Nova. Aboyne’s Stewart Davidson and Inverness co-driver Breagha Dobney were Class 5 victors in a Ford Escort Mk2, while Steven Smith of East Kilbride, with Daniel Johnstone of Inverness on the notes, made sure of Class 7.

The next round of the ARR Craib Scottish Rally Championship is the Jim Clark Reivers Rally in Duns on June 2nd.