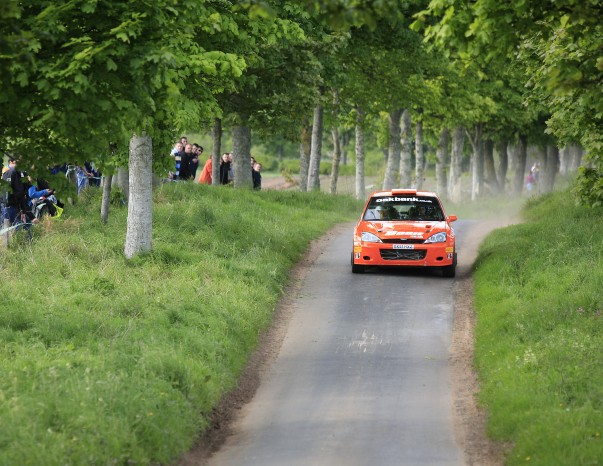 Last year’s winner, Euan Thorburn, was twenty seconds up on the defending champion at the end of the penultimate stage when a hydraulic oil pipe broke in his Ford Focus WRC.

Oil caught alight on the hot exhaust, causing a small fire which was quickly extinguished by marshals. Following emergency repairs, Thorburn and co-driver Paul Beaton were able to continue to the final stage, but with the car not fully functional, they lost thirty seconds to Bogie and navigator Kevin Rae and had to settle for second.

Thorburn, who had successfully defended his Jim Clark National title over the previous two days, could not hide his disappointment at the finish in his home town of Duns: “We were lucky to get to the end. It’s put a real dampener on the weekend to be honest. We should have won the rally”.

Bogie, meanwhile, had a largely trouble-free day behind the wheel of his Focus WRC, apart from a minor mishap right at the start: “With Euan winning the National rally, we knew we had to be quickly on the pace from the off”, said Bogie: “Unfortunately, we weren’t – we stalled at the start line of the first stage, costing us about ten or twelve seconds. From then on we were really chasing our tails, but we kept the pace up and I was happy with the stage times, given it was the first competitive run with the Focus on tarmac.  It was a fight right to the end before Euan hit trouble and we inherited the win. That’s the way it goes, I lost out with gearbox problems last year”.

Third place went to Barry Groundwater – nearly two minutes adrift of Thorburn – in his Mitsubishi EVO 9. It was an excellent result for the Stonehaven competitor, co-driven by Neil Shanks, after he had been forced to pull out of the National rally the previous day because of sickness: “We’re really happy with the way it turned out. It was fast going, the car performed well and it was good fun”.

Alistair and Colin Inglis achieved their best ever SRC result with fourth overall in their EVO 5: “We were pushing really hard”, said Alistair: “We had a couple of wild moments and lost our brakes completely at one point and found a hedge. So, an interesting day, and lucky to make it through”.

There were no such dramas for fifth-placed Andy Horne and Jim Howie in the DAM 4100gti: “We’ve had a fantastic day”, said the Inverness-based driver: “The stages were brilliant and much improved from the recce the previous weekend – someone has put in a lot of hard work”.

Banchory’s Quintin Milne, second in the points going into the Reivers Rally alongside Aberdeen-based navigator Martin Forrest,  took a hard-earned sixth place in his EVO 9: “We had a great tussle with Barry early on – he’s much smoother than me on tarmac. We might have got fourth, but I broke a wheel going over a jump at the bridge near the end of the second last stage.   We put in a final push on the last stage, and I’m glad we did, because we picked up a handful of valuable championship points”.

Local duo Dom Buckley and Doug Redpath picked up their second successive top seven finish and a class win on their home event in a Subaru Impreza, forty-five seconds ahead of the EVO 9 of Inverness pairing Donnie MacDonald and Andrew Falconer: “I’d sum up my day as “too slow””, admitted MacDonald: “I’ve never been a fan of the tarmac”.

Castle Douglas crew Jock Armstrong and Kirsty Riddick were lying third behind Thorburn and Bogie after three stages, but their Subaru Impreza sustained a puncture on SS4 Blackadder 1, losing them more than two minutes: “It’s still a mystery where we actually picked up the puncture”, said a rueful Armstrong: “On the second run through Blackadder we were looking out for any clue but we couldn’t see anything obvious – not even the pothole which I thought might have caused it. It’s frustrating, because we were setting some consistent times – both earlier in the day, and after the puncture. It’s two years since I last did the tarmac round. We were right on the button behind Euan and David and that’s where we expected to stay. We came back from twenty-second to ninth, so I suppose it’s not too bad, all things considered”.

Nottinghamshire’s Karl and Guy Simmons in a Subaru Impreza rounded off the top ten, just six seconds in front of the leading 2WD competitor Steve Bannister, in his historic class Ford Escort Mk2. The Yorkshireman, co-driven by Hawick’s Louise Sutherland, was well pleased with the result: “The stages were fantastic and it was a very well run event. Everything ran on time – so no complaints at all. I’m looking forward now to the RSAC Scottish at the end of the month, and hopefully we’ll be contesting the rest of the championship”.

Group N honours, fifteenth overall,  went to Conon Bridge driver  John Morrison and co-driver Susan Shanks from Elgin in a Mitsubishi EVO 9: “It’s been a good day all round. The weather has been kind to us, and the car has performed well on the stages. We had a problem in the morning when a fuel line came off, and the car wouldn’t start. But we got it sorted, and I’m happy with the result”.

Aberdeen’s Chris Collie – fifth in the points after the previous two rounds – snapped three drive-shafts in his EVO 6 on the way to sixteenth overall: “It’s certainly been an eventful day”, said Collie, who had Alford’s Lisa Watson on the notes: “We’ve only had one stage where all four drive-shafts were intact!”

Invernessians Dougal Brown and Lewis Rochford were a further three seconds back in their EVO 9: “The first couple of stages we struggled with brake fade. I think I was too cautious and I was dragging the brake too much. The second time through I was either accelerating or braking and it worked a lot better. We also ran the last couple of stages without a centre diff so it’s been a mixed day, to say the least”.

Carl Tuer and Rob Tuer celebrated what had been a “fantastic weekend” – winning the 1600cc class in their MG ZR Super 1600 on both the National and Reivers rallies forthe second year running. Second in class went to Alasdair S.Graham in his Vauxhall Corsa. After a difficult start to the season, the Paisley driver was “over the moon” with the result, alongside navigator Lisa Stuart from Alford. Third-placed Kieran Renton from Coldstream, in a Ford Fiesta R2, maintained his points lead in the championship, alongside Kelso co-driver Carin Logan.

Dumfries and Galloway crew Iain Haining and Mairi Riddick had a trouble-free run on their way to a third consecutive SRC victory in Class 3 in their Vauxhall Nova. They will be aiming to make it four in a row on the “Scottish” gravel stages.

Among the notable retirements were Mike Faulkner and Peter Foy, who were sitting fourth overall in the championship going into the third round. However,  the EVO 9 crew came to grief on the opening Bothwell stage, following what Faulkner admitted was a “big moment”: “The car skipped over the bump at the cattle grid, putting us off the road. We managed to get back on, but a branch had damaged the oil cooler and it was game over”.

There was also disappointment for Kirkgunzeon’s Rory Young, who was sitting fourth after three stages in his Mitsubishi EVO 5 when problems set in and forced an early retirement. It was a frustrating end to the weekend for Young and Carlisle navigator Allan Cathers following an excellent sixth overall, and first in class, on the previous day’s National rally:

“We were on a bit of a high coming into the Reivers and our stage times early on were very good”, said Young: ” However, we were conscious we might have had a wee problem going into the second stage. The car started to overheat with the turbo being a bit slack in the manifold. Unfortunately, that manifested itself into a more serious problem”.