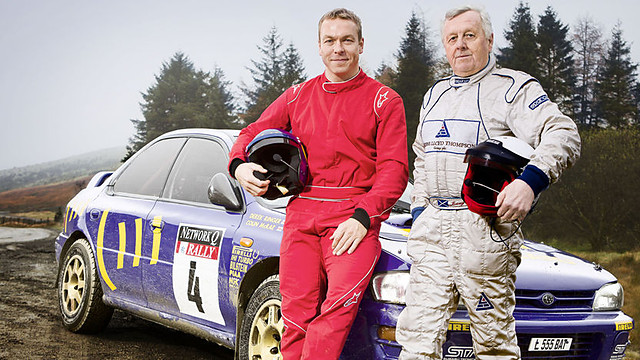 There might well be some gold “in them thar hills” around Aberfeldy on Saturday October 5th, but it will have nothing to do with those who dig for it or pan for it in streams and rivers. This gold has been earned in a rather different, but just as arduous, manner.

Sir Chris Hoy will be taking a close look at the sport from the co-driver’s seat as he partners five times British Rally Champion Jim McRae in the Course Car which runs ahead of the main competition.

For her part, Amy Williams will be partnering Sky TV F1 presenter and pundit Tony Jardine in the main competition. Amy has set her sights on qualifying for her International Rally licence so that she can contest Britain’s counter in the World Rally Championship, Wales Rally GB, at the end of November.

To earn that licence, Amy needs to finish three National Rallies. Her campaign started just over a week ago on the GWF Energy Merrick Stages Rally in Wigtownshire where she and Tony Jardine not only completed the course, but won their class in their Honda Civic. Her next outing will be Rally Yorkshire on 27/28 September before she again heads north to Scotland for the Colin McRae Forest Stages Rally to try for her third signature. Any hiccup along the way could threaten her schedule and plans for her World Championship debut in November.

There is no such pressure on Sir Chris Hoy. Last year he teamed up with Jim McRae for the BBC TV documentary ‘Racing Legends’ programme which was devoted to the late World Rally Champion,  and Coltness Car Club member, Colin McRae. An avowed fan of rallying, and of Colin McRae in particular, Sir Chris jumped at the chance to ride with Jim McRae through some ‘proper’ forest stages.

Although not actually competing on the event, the Course Car crew have a very responsible job working with the rally organisers to ensure that the main field of competitors will encounter no issues or problems. They will have to check that the Special Stages are properly marked, the route and timing of the event are accurate and that the Rally Marshals are all at their stations, ready and primed for action.

Both Olympians will be well and truly out of their comfort zone on this event, Sir Chris relying on the driving skills of Jim McRae as opposed to relying on his own skills on pedal powered two wheels. For his part, Jim will be relying on Sir Chris to call the twists and turns of the Special Stages at rally speeds, accurately!

The pressure will also be on Amy to do the same for her driver Tony, as she swaps the Canadian ice covered walls of the downhill slalom track for the ditch and tree lined roads of Scottish forests. The big difference this time, is that she won’t be flinging herself headlong down a glacier at 90 mph on a sled built for one, instead she’ll be hurting between the trees at over 100 mph – but inside a fully protected, roll-caged Honda Civic rally car.

Around one hundred rally crews will be expected from all over the UK on this penultimate round of both the ARR Craib Scottish Rally Championship and Mintex British Historic Rally Championship – but they won’t have time for autograph hunting!