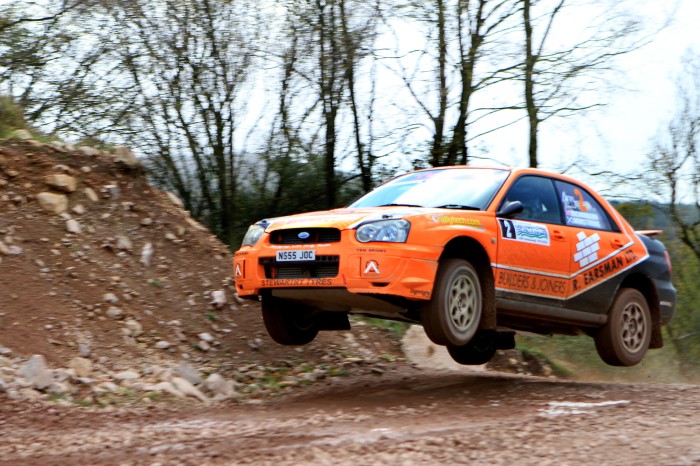 Five-time Scottish champions David Bogie and Kevin Rae had led throughout until the end of the last stage, but were forced to pull over on the way to the finish in Castle Douglas when the oil-warning light came on in their Ford Focus WRC.

Fearing an expensive repair, the Dumfries driver decided to err on the side of caution, and switched everything off:

“It just wasn’t worth risking a broken crank. Up until that point, we’d had a great run on superb stages at the end of a successful season, so we have absolutely no complaints”, said Bogie, who was fastest outright through four of the seven stages on a day of heavy blustery showers, which made for difficult driving conditions.

For his part, Armstrong, co-driven by John Richardson, was delighted to take his sixth win on his local event behind the wheel of his rebuilt Subaru Impreza:

“A win is a win in my book and I couldn’t be happier”, said Armstrong: “I’ve had a bad year – without any success in the Scottish championship and the crash on the Merrick – so this is very welcome, particularly with the rally celebrating its anniversary. After some adjustments at service, we were going better in the afternoon. David and I recorded the same time on the second run through the super-special stage in the quarry at Dalbeattie, and I took eleven seconds out of him on the final stage, so we were slowly clawing it back”.

Mike Faulkner and Peter Foy finished as runners-up – 1min 25secs further back – in their Mitsubishi EVO 9, to secure third overall in the championship:

“It’s been a tricky event – very slippy in places with the rain – and there was plenty to catch you out in the super-special stage”, said the Kirtlebridge driver: “But we’ve achieved what we came to do, which is to make sure of third place in the championship. It seems we’ve salvaged something out of a really tough year”.

The final podium place went to Oban crew Shaun Sinclair and Chris Hamill in a Mitsubishi EVO 9. It was their first competitive outing in two and a half years –  the only problems being an intercom glitch early on, plus a puncture. They finished two seconds ahead of Barry Groundwater and Neil Shanks, also in an EVO 9, who were third of the SRC-registered crews. Going into the event, the Stonehaven driver was just one point behind Faulkner in the fight for third spot in the series:

“Mike set the standard in the morning – he was absolutely flat out, and I couldn’t get near him”, said Groundwater: “I picked up in the afternoon but it was too little, too late. We were in the same situation on the Merrick last year and I put the car off the road trying to catch him, so sometimes you’re better just to be a bit more cautious and accept where you are”.

Donnie MacDonald, fifth overall, had a “bad day” in his EVO 9 alongside Andrew Falconer. There were front suspension problems in the morning, followed by a puncture on the second run through the super-special stage:

“We put a wheel into the rear wing as well, it’s been a disaster”, admitted the Inverness-based driver: “See when I started rallying, I really liked the Galloway Hills!”.

Fellow Highlander Andy Horne co-driven by Jim Howie, was more enthusiastic about his day behind the wheel of his DAM 4100Gti on the way to 6th overall – a welcome result after a couple of previous non-finishes: “The stages have been slippy, but all in all it’s been a good day for us – and the car has behaved, which is the main thing. Well worth the trip down”.

Andrew Gallacher, with Phil Sandham on the notes, was a further ten seconds behind to take Group N honours in his EVO 9: “If it hadn’t been for a puncture on the second stage we could have made it into the top five, but apart from that we had a pretty good day”, said the Kilmarnock-based driver and son of the late three-time Galloway Hills winner Drew.

Newton Stewart’s Craig McMiken and Kirriemuir navigator Craig Wallace were eighth overall, seventh in the points, in their EVO 9 – the only “drama” being contact with a tyre wall in the super-special stage which damaged the bonnet of the car.

Ninth-placed John McClory and David Hood, in the GpN Subaru Impreza N15, were hot on their heels – there was just a second between them on the final Dalbeattie test – while Dougal Brown, co-driven by 2013 SRC Junior Co-drivers’ Champion Lewis Rochford, rued a minute penalty, without which, the Inverness duo would have finished eighth rather than tenth overall.

Once again, Steve Bannister and Louise Sutherland were the best of the 2-wheel-drive competitors in the historic-spec Ford Escort Mk2 – despite driving for six miles through the second stage with a rear punture: “Having already won the 2WD championship, today was all about securing the Ladies Co-drivers’ title for Louise, and we’ve done that. So it’s been a good event for us”, said Bannister.

For Peter Stewart, the Galloway Hills was his first SRC event of the season, and he marked the occasion by taking Class 4 honours in his Ford Fiesta R2. “We’ve had a few “moments” along the way today, but I couldn’t be happier”, said the Dumfries driver, who had teamed up with Thornhill navigator Kenneth Marchbank.

Class 3 champions Iain Haining and Mairi Riddick capped a remarkable season by making it eight  wins out of eight in their Vauxhall Nova – “I guess you can’t better that!”, said the Locharbriggs’ competitor.

Fifty crews finished the rally, with twenty-one retirements. Among the those who failed to finish were Jon Burn, Chris Collie, Alistair Inglis, 2011 Hills winner Mark McCulloch, whose Subaru Impreza ended up on its side on the fourth stage, and GpN contender Fraser Wilson – his rally, alongside Steven Broll, lasting just 200 yards of stage one before the gearbox of his Mitsubishi EVO 8 packed in.

Another casualty was Ivor Clark, who with fellow Gretna competitor Keith McCleary, won the inaugural Galloway Hills Rally in 1974 in a Ford Escort. Forty years on, the pair came to grief on the first run through Dalbeattie in their Mitsubishi EVO 4.

Full results can be found at www.scotresults.co.uk

For news and updates of all SRC rounds, go to www.scottishrallychampionship.co.uk