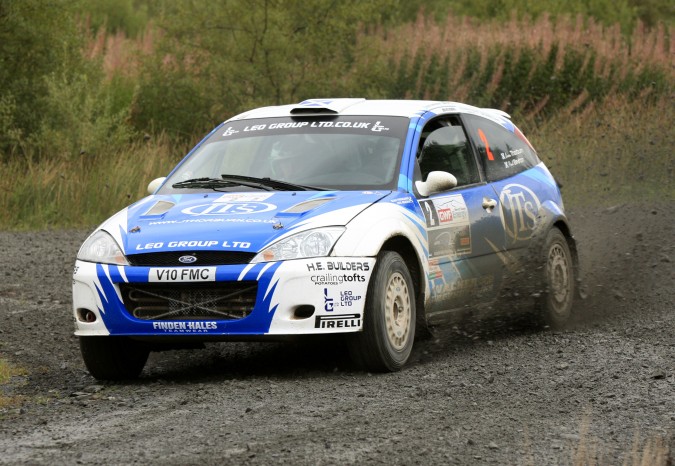 Borderer Euan Thorburn and five-time title-holder David Bogie are set to resume their battle for supremacy on the opening round of the 2014 ARR Craib MSA Scottish Rally Championship in Inverness on Saturday, February 22nd.

The pair will line up their Ford Focus WRCs as first and second seeds respectively on the Arnold Clark Thistle Hotel Snowman Rally, which has attracted a bumper entry of 114 crews.

Following a successful foray south of the border, Duns-based Thorburn and co-driver Paul Beaton from Inverness ended last season as BTRDA champions. However, their Scottish campaign was dogged by various mechanical issues and problems, and they managed only two wins to Bogie’s four.

For his part, the Dumfries driver, who won the Snowman in 2011 and 2012, plans to pick up where he left off alongside Hawick navigator Kevin Rae:

“To have five titles is awesome, but to have six would obviously be even better. I want to keep on winning championships, that’s what it’s all about for me”, said the 26-year-old.

Third seed Jock Armstrong from Castle Douglas – winner of the season-opener in 2010 – will have experienced co-driver Paula Swinscoe on the notes as he looks to put a disappointing 2013 season behind him. It included three non-finishes in his Subaru Impreza, the one high point being a sixth victory on his family-sponsored Galloway Hills Rally.

Banchory’s Quintin Milne and Martin Forrest from Aberdeen start one place further back in their Mitsubishi EVO. The pair ended last year as runners-up to Bogie and Rae, with a win on the Border Counties, and three third-place finishes.

Meanwhile, fifth seeds Mike Faulkner and Peter Foy did not have their troubles to seek with a new-for-2013 EVO 9, but still managed to finish third overall in the drivers’ and co-drivers’ championships respectively.

“We finished the season with three podiums,  so we’re hoping to build on that form”, said  Faulkner: “I enjoy the Snowman stages. They’re fast and challenging, with unpredictable conditions adding to the mix. As for the SRC, the competition is fantastic – it just seems to get stronger and stronger.”.

Stonehaven-based driver Barry Groundwater, with Neil Shanks from Elgin on the notes, will be targeting a strong start to the new season in his EVO. The pair lost out to Faulkner and Foy by a single point in the final championship points.

The local challenge will be led by Inverness duo Donnie Macdonald and Andrew Falconer, who finished in the top half-dozen six times last year in their EVO 9,  with Andy Horne starting at No 8 on his home event.

Mark McCulloch from Newton Stewart has joined forces with fellow Wigtownshire competitor James Haugh as he prepares to mount an all-out challenge in his Subaru Impreza, while Aberdeenshire crew Bruce McCombie and Michael Coutts round off the top ten starters in the first of five Group N EVO entries.

The EVO line-up is split by one of two MG Metro 6R4s: the first crewed by Inverness duo Steven Ronaldson and Ann Marie Fraser, with fellow “locals” Sandy and Ian Arbuthnott starting further down the field.

Malcolm Buchanan from Stornoway, with Forfar’s Ian Nicoll on the notes, is the first of the rear-wheel drive entries in his Ford Escort Mk2. They will be flagged off ahead of the Honda Civic Type-R of Bothwell’s Graeme Schoneville, co-driven by Michael Hendry from Aberlour.

Iain Haining from Dumfries and Haugh of Urr navigator Mairi Riddick were unbeatable in Class 3 last year,  with eight consecutive victories in their Vauxhall Nova, while another Dumfries and Galloway crew, Iain Wilson and Keith Fremantle, will be aiming to keep up the momentum which won them overall honours in the 1600cc category.  They will face strong competition from, among others, Grant Inglis and Robert Gray in a Honda Civic, and the Ford Fiesta R2 of Kieran Renton, who will have fellow Borderer Dave Robson alongside for the season-opener.

The Peugeot 205 contingent is led by Charles Blair and Mark Roberts from Dumfries, while Sue and Tom Hynd will be vying for family bragging rights as co-drivers for Scott Peacock and Adrian Stewart respectively.

Full details can be found at www.snowmanrally.co.uk