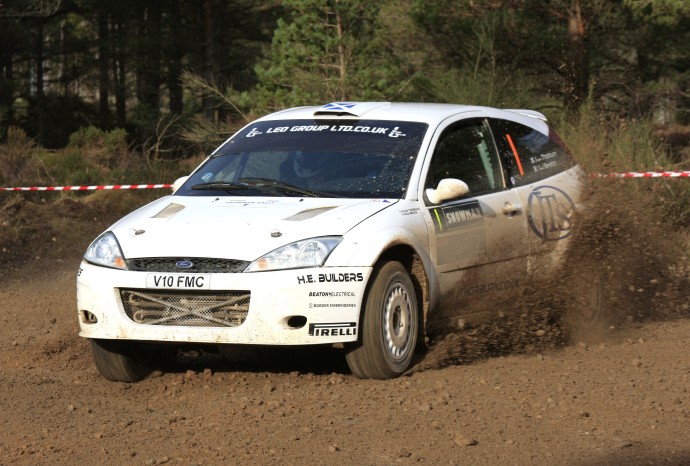 Euan Thorburn clinched what he described as “one of his hardest ever wins” on Saturday’s opening round of the 2014 ARR Craib MSA Scottish Rally Championship in Inverness.

The Borderer steered his Ford Focus WRC to victory on the Arnold Clark Thistle Hotel Snowman Rally, finishing thirty-four seconds ahead of Quintin Milne in a Mitsubishi EVO 9. Mike Faulkner, also in an EVO, clinched the final podium spot, a further three seconds back.

Defending five-times champion David Bogie had to settle for fourth in his Focus after losing more than a minute and a half with a front puncture on the third of the five special forest stages.

The Dumfries driver, with Kevin Rae on the notes, was quickest through the first two stages – the ultra-tricky Millbuie followed by the six and a half miles of Ben Wyvis – and had a twenty-six second advantage over Thorburn and navigator Paul Beaton going into the eleven-plus miles of Rogie. Disaster struck about a mile and a half in:

“The wheel just lost pressure for some reason – and we had to drive nine miles with a puncture. Near the end the tyre was burning and smoking badly” explained Bogie, as he examined the shattered wheel rim at second service: “Usually with a modern tyre you have to hit something for it to go – but we never struck anything on this occasion”.

The champion managed to claw back some of the lost time – he was fastest through the fourth Strath Rory test and the final six miles of Scotsburn – but it proved too big a gap to make it back into the top three. Meanwhile, Thorburn did not have his troubles to seek in the closing stages:

“We broke a brake pipe on stage four and had to carry out some running repairs, before nursing it through the final stage. It’s been a very difficult event for us, to be honest- we just don’t seem to have been on the pace. We changed the suspension settings for the final two stages. So, to get the win is extra special, particularly on the first event of the season”.

Milne, with Martin Forrest on the notes, also found it a tough challenge and admitted there had been a lot of luck involved:

“I had a bad first stage – the diff pump wasn’t working and I was being a little canny having not sat in the car for a while, but then two and three were perfect. A mile in on the fourth stage, I lost the diff pump again, and had a couple of spins – I was just trying too hard. And then on the last stage I left the road at about eighty miles an hour. We were heading for the trees, but somehow managed to get back on track and only just avoided a collision with a chicane”.

It was Faulkner and Peter Foy’s third successive podium finish on an SRC event, but the experience proved bitter-sweet:

“On the one hand we’re chuffed to have finished third, but disappointed to just miss out on the runners-up spot”, said Faulkner: “We got caught out on one of the chicanes which were added by the organisers on the eve of the rally. We missed it on the notes altogether and ended up having to go down a firebreak, through a ditch, turn round and retrace our steps. It dropped us thirty seconds”.

Barry Groundwater, co-driven by Neil Shanks,  had a “reasonable day” on the way to fifth overall in his Mitsubishi EVO:

“Our main target today was first to finish, and second to make it into the top ten, and we’ve achieved both”.

Also satisfied with their day’s work, was local crew Dougal Brown and Lewish Rochford, who brought their EVO 9 home in sixth – thirteen seconds shy of Groundwater:

Said Brown: “We came with a different approach to the event. Quintin Milne was out in the car with us during testing earlier in the week and he noted that I was shifting up far too early and losing out on power. We also dropped the tyre pressures a bit and it seems to have done the trick”.

Banchory’s Bruce McCombie marked his first SRC outing in a new EVO with an impressive seventh overall alongside Michael Coutts, seven seconds ahead of the MG Metro 6R4 of eighth-placed Steven Ronaldson and Ann Marie Fraser from Inverness.

Andrew Gallacher, with Phil Sandham navigating,  emerged as the leading Group N driver in his new EVO 9, but there were problems along the way:

“We went down the wrong road on stage four – but we weren’t the only ones. However, we’re happy enough for the first event of the season. Hopefully we’ll get more out of the car for the Border Counties. When it was mapped recently it was reckoned to be down about forty horsepower”.

Mark McCulloch, in tenth overall, was the first home of the south-west of Scotland contingent in his Subaru Impreza, after third seed Jock Armstrong was forced to retire his Subaru with a broken driveshaft after just one stage.

“A top ten result for us today was just about spot on”, said McCulloch, who was co-driven for the first time by Jim Haugh: “We know we can go a lot quicker, and we struggled a bit in the slippy conditions. We don’t seem to have the right level of grip, and we need to get some work done on the suspension”.

John Morrison and Peter Carstairs were runners-up in the GpN category in their EVO 9 – the Conon Bridge driver far happier at the finish than he had been earlier in the day:

“The first stage was awful – very slippy – but things certainly improved for us after that. We just need more time in the car after the winter lay-off”.

Port William’s Fraser Wilson, who was competing for the first time alongside navigator Jane Nicol from Edinburgh, brought his EVO 9 back to the finish in Inverness in third spot in GpN:

“We had a problem with steering early on when the pinch bolt slackened, and we lost time. I also thought the afternoon stages were going to be drier, but far from it. And the chicanes in stage four were really tight – and we lost a fair bit of time. We had to reverse three or four times in there”.

Peter Stewart from Dumfries, with Thornhill’s Kenneth Marchbank on the notes, had a couple of off-road “excursions” on the way to a fine win in the 1600cc category – ending the day 24th overall  in his Ford Fiesta R2. Borderers Kieran Renton and Dave Robson overcame early brake problems to finish second, also in an R2.

John Macleod and Iain Mutch in a Ford Focus clinched victory in the FWD 2000cc category, ahead of Graeme Schoneville and Michael Hendry in a Honda Civic Type-R.

Scott Peacock and Sue Hynd, in a Peugeot 205GTi, took maximum championship points in Class 3, and Scott Macbeth, with David Wilson co-driving, was the Class 2 winner in a Vauxhall Nova.

There were seventy-four classified finishers and thirty-six retirements. The results also showed six exclusions for taking an incorrect route – five in SS2 Ben Wyvis, and one in SS4 Strath Rory.

Competitors will now prepare for the second round, the Brick & Steel Construction Border Counties, based in Jedburgh on Saturday March 22nd.

An extra incentive this season is free entry for the overall SRC champion to the national section of Wales Rally GB, the concluding round of the FIA World Rally Championship, in November.

As part of the “Road to Wales” initiative, no cost entries will be also be provided to the winners of the national championships in England, Wales and Northern Ireland, as well as the BTRDA rally series. Further details can be found at www.walesrallygb.com