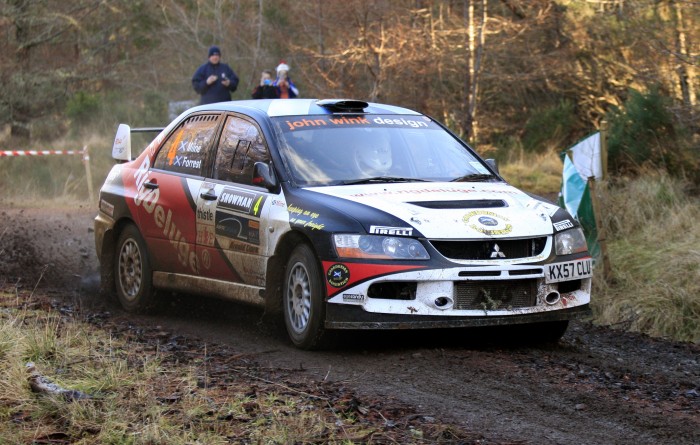 Last year’s winners Quintin Milne and co-driver Martin Forrest head a quality field of nearly one hundred crews for next Saturday’s second round of the 2014 ARR Craib MSA Scottish Rally Championship in Jedburgh.

Twelve months ago, Milne battled snow and ice on the Kielder stages to take victory on the Brick & Steel Construction Border Counties in his Mitsubishi EVO 9.

The Banchory driver currently sits second in the points after finishing as runner-up to Duns-based Euan Thorburn on the season-opener in Inverness.

Thorburn, co-driven by Paul Beaton, will line up his Ford Focus WRC behind that of defending Scottish champions David Bogie and Hawick navigator Kevin Rae – twice winners of the Border Counties.

A puncture put paid to Bogie’s hopes of victory on the Snowman, but, that aside, the five-time title holder from Dumfries was happy with his form:

“We were fastest through four of the five stages, so the pace was certainly there – and that bodes well for the rest of the season. If we can go into the Border Counties with the same pace, then I see no reason why we can’t take the win. It’s a rally which requires big commitment, but I’m feeling comfortable and confident in the car, and thoroughly looking forward to the event”.

Mike Faulkner, with Peter Foy on the notes, was also satisfied with the pace on the opening round –  steering his EVO 9 to the final podium spot, just three seconds adrift of Milne. The fast flowing Kielder stages suit Faulkner’s driving style, and he aims to pick up where he left off in Inverness:

“We can look forward to another tussle with Quinton, and hopefully Jock (Armstrong), after his bad luck on the Snowman. We’ll be fighting to stay as near to Euan and David as possible. They’ll be difficult to beat, but, as the Snowman proved, if either have problems, then we need to be close enough to capitalise. In truth, there’s a host of other drivers capable of being in the mix – so it looks like being another close-fought Scottish Championship round – which is just what we want”.

Armstrong’s Snowman challenge came to an end on the second stage, when his Subaru Impreza succumbed to transmission problems. The Castle Douglas competitor, who will again have Paula Swinscoe on the notes, is looking to kick start his campaign on the Border Counties, but has not fared well on the event in recent years. He went off on the first stage last year, following previous DNF’s in 2010 and 2011.

In contrast, sixth-seed Barry Groundwater has finished in the top eight since 2009 in his Mitsubishi EVO. He was fourth overall in 2012, and last year  took the runners-up spot alongside navigator Neil Shanks from Elgin.

Meanwhile, the County Durham crew of Stephen Petch and Michael Wilkinson, while not in the chase for Scottish championship points, will be looking to better their third place finish of last year.

SRC regular Chris Collie sat out the opening round, but will be back in action in his Mitsubishi EVO 6. The Portlethen competitor, co-driven by Mark Fisher, ended the day sixth overall in Jedburgh in 2013.

Donnie MacDonald, with fellow Invernessian Andrew Falconer navigating, will be hoping for a clean run in his recently acquired EVO 9. He was eyeing a top-seven spot on the Snowman, but an electrical problem forced him to call it a day on the final stage.  He will be followed off the start-line by the winners of last month’s Riponian Stages Rally, Peter Wilkinson and Ian Windress, in a Ford Focus. Like Petch, they will be aiming to mix it with the leading SRC competitors.

Bruce McCombie heads to  Jedburgh off the back of an impressive seventh overall on the Snowman in his new-for-2014 EVO 9 – the Banchory man co-driven by Michael Coutts.

Former Scottish champion Jon Burn and navigator Alan Stark start twelfth in their Subaru Impreza WRC, while Rory Young, with Allan Cathers alongside, will want to make amends for a non-finish last time out in his EVO 5.

The Group N challenge will be led by Andrew Gallacher, who also debuted a new EVO 9 on the opening round. Before the event, the car was shown to be down on power, but the Kilmarnock driver, with Phil Sandham navigating,  said they would be looking to “get more out of it” come the Border Counties.

Event sponsor John McClory, who, with David Hood,  won GpN and finished seventh overall in 2013, will return to the fray in his Subaru Impreza N15.

Inverness duo Dougal Brown and Lewis Rochford will aim to keep up the momentum after finishing sixth overall on their home event in an EVO 9, and Wigtownshire crew Mark McCulloch and Jim Haugh will also be targeting a strong points finish in their Subaru Impreza.

After one round, John Morrison from Conon Bridge sits tenth in the overall drivers’ standings and second in GpN in his Mitsubishi EVO, one point ahead of Port William’s Fraser Wilson. Fellow Wigtownshire competitor Craig McMiken, co-driven by Craig Wallace, also starts in the top-twenty in his EVO.

With classes 1-7 running at the front of the field, the first competitive car into the stages will be the historic-spec Ford Escort Mk2 of Steve Bannister and Louise Sutherland. The pair have been the event’s leading  2WD competitors on three occasions in the past four years, but are likely to face strong competition for overall honours from Mull ace John MacCrone, co-driven by Stuart Louden, in his Ford Fiesta R200.

Bothwell’s Graeme Schoneville, with Michael Hendry alongside, will be eyeing maximum points in Class 7 in his Honda Civic Type-R, as will Lauder’s Callum Atkinson, co-driven by Keith Riddick, in a Ford Fiesta RT.

The 1600cc category again promises to be an intriguing tussle. Peter Stewart from Dumfries, with Kenneth Marchbank on the notes, will look to extend his advantage after taking the win on the Snowman in his Ford Fiesta, ahead of the Honda Civic of Duncan Campbell and Gavin Chisholm.   2013 class champions Iain Wilson and Keith Fremantle from Dalbeattie will be back in action in their Vauxhall Nova, after crashing out on round one,  while Kieran Renton and Dave O’Brien, from Leithholm and Duns respectively,  will have home support in their Ford Fiesta R2. Others to watch out for include last year’s class winners, Carl and Rob Tuer in an MG ZR S1600; Alasdair S.Graham and Laura Stuart in a Vauxhall Corsa, and Greg and Chris McKnight from Dumfriesshire in their Mk2 Escort.

Scott Peacock, co-driven by Sue Hynd, currently leads the way in Class 3, after taking full championship points on the Snowman, ahead of fellow Peugeot 205 competitors Simon Hay and Blair Brown. However, Iain Haining and Mairi Riddick, who won all eight rounds last year, will be back in action in their Vauxhall Nova, after engine problems in Inverness.   Charles Blair and Mark Roberts will also be targeting a good finish, following a DNF last time out.

Scott MacBeth (Vauxhall Nova) has his nose in front in Class 2, with Linzi Henderson (MG ZR) two points further back, ahead of Vauxhall Corsa drivers Scott Sloan and Derek Connell.

The first car leaves Abbey Place in Jedburgh at 8.30 on Saturday morning, with the leading competitors returning around 2.30 in the afternoon.

Full event details can be found at www.bordercountiesrally.co.uk