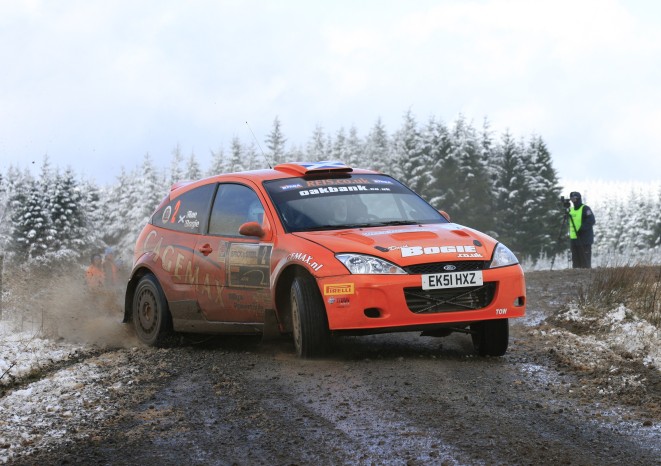 David Bogie led from start to finish in his Ford Focus WRC to win Saturday’s Brick & Steel Border Counties Rally for a third time, and chalk up his first victory in the 2014 ARR Craib MSA Scottish Rally Championship.

The five-time title-holder from Dumfries, co-driven by Kevin Rae, was fastest through four of the five forest stages to finish with a total time of 43 minutes 23 seconds, forty-seven seconds ahead of the Focus of Stephen Petch from Bishop Auckland. Bogie’s main championship rival, Euan Thorburn from Duns, also in a Focus,  finished third overall, a further four seconds adrift.

Since Petch, who had finished third on the event in 2013,  is not registered for the SRC, the result means Thorburn – winner of last month’s season-opener in Inverness – now has a provisional two-point lead over Bogie after two rounds.

While the conditions in Kielder Forest were nowhere near as treacherous as those of twelve months ago, they were still extremely tricky, with snow lying on the two opening stages. It made tyre choice difficult, and required a high degree of confidence and commitment behind the wheel.

“With the 2WD competitors running ahead of us, there were tramlines in the snow on the opening stage, but getting the braking points right wasn’t easy”, explained Bogie at the finish in Jedburgh: “As the day wore on, conditions improved. We had a bit of a misfire at one stage, but it was nothing serious. Overall, our pace was pretty good, and I felt comfortable in the car. It was important we got the win”.

Thorburn, co-driven by Paul Beaton from Inverness, was second-fastest through SS2 Bewshaugh, and third quickest through the third and final stages. The Borderer admitted they had not had their troubles to seek:

“Stage one, puncture; the second stage was alright, but on stage three, the windscreen steamed up so we lost a bit of time right at the end because we couldn’t see – it was like crawling along in first gear. On the fourth stage we stalled at a hairpin; and on five, which was very rough, we just drove through to get to the finish”.

Jock Armstrong, who was competing for only the second time with navigator Paula Swinscoe, achieved his first finish on the Border Counties in the last four attempts – the Castle Douglas driver ending the day fourth overall, third in the points, in his Subaru Impreza:

“We’ve had a little bit of luck today – there were several “moments” which could have gone either way. The first stage wasn’t easy, particularly with dislodged snow, but we were second quickest behind David”, said Armstrong: “Once I’d got my head round the conditions it was a case of keeping the car on the road and going for the finish. And Paula and I were really getting into the groove”.

Quintin Milne, runner-up on the Snowman, and winner of the Border Counties in 2013 alongside co-driver Martin Forrest from Aberdeen, struggled with suspension settings on his EVO 9:

“They’re actually the same as those used by Barry (Groundwater) but they don’t suit me. It makes the car too “tail happy”, explained Milne: “We were first of the 4WD’s onto the stages, and although there was a tramline in the snow from the earlier 2WD cars, those conditions don’t suit my exuberant driving style, when you need to drive a neat “tarmac line” with snow lying either side.  We hit a chicane at one point and bashed in a rear door”.

Leading Group N competitor Andrew Gallacher, with Phil Sandham on the notes, finished a fine sixth overall in his new-for-2014 EVO 9, and was more than satisfied with the result, given the conditions:

“The stages were far from easy, but it was the same for everyone. We didn’t have any major issues. The car was down on power on the Snowman, but we got that sorted, and I think it’s now running as well as it ever will”, said Gallacher, who consolidated his position in the GpN standings.

Last year’s runner-up Barry Groundwater from Stonehaven ended the day eighteen seconds back in seventh overall, in his EVO, and admitted to being “over cautious”:

“It was an OK sort of day, but I think I was affected by memories of all the ice and snow on last year’s event”, said Groundwater, co-driven by Neil Shanks from Elgin.

Northern Ireland’s Brenden Cumiskey registered with the championship on the morning of the event, and marked the occasion with an impressive eighth overall – and a good haul of points – at the wheel of his Mitsubishi EVO.  The Dundalk-based driver was paired with navigator Ronan O’Kane. They were followed home by non-registered crew Peter Taylor and Paul Hughes in a Ford Fiesta D2000, eight seconds further back.

The overall top-ten was rounded off by Banchory’s Bruce McCombie in his “new” EVO 9 – the result adding to his impressive seventh-place on the Snowman:

“The clutch pedal went to the floor on the last stage and we had a wee problem with the turbo manifold – it went into safe mode – about four miles from the end, so we’re quite lucky to be here”, said McCombie, who had Michael Coutts on the notes: “The conditions were pretty slippy, so it’s a relief to get a finish. It was a good “learning day” event”.

Newton Stewart’s Mark McCulloch and navigator James Haugh were a further eight seconds adrift in their Subaru Impreza, after surviving an early scare which, at first service, looked as though it could end their challenge:

“It felt as though we had no boost on the first two stages – it was just going off the power the whole time – and we were all for calling it a day”, said McCulloch: “It turned out it was actually a coil lead going into the engine, and it was dropping us to three cylinders. Once that was sorted, stage three felt like a first stage for us so it took as a while to get going. The main thing is we got to the end – which we didn’t think was going to happen earlier in the day”.

“We had a bit of a moment in the snow on the second stage and got pulled into a ditch. We also picked up a slow puncture on the back right, and put on an old spare. As a result,we struggled with grip for the next two stages”, said Brown.

Fraser Wilson and new co-driver Jane Nicol were sixteen seconds back in his EVO 9, to follow up on their promising start together on the Snowman. The Wigtownshire driver finished the day second in GpN in his Mitsubishi EVO 9.

Arguably the “drive of the day” went to Steve Bannister in his Ford Escort Mk2.  For the fourth time in recent years, the Yorkshireman, with Louise Sutherland navigating, finished as the event’s leading 2WD competitor – ending the day nineteenth overall.  The pair were the first onto the stages, and, as such, had fresh snow to contend with. After a tentative start, Bannister steadily picked up the pace and subsequently came out top in the tussle with fellow historic-class Escort stalwarts Matthew Robinson and Andy Kelly.

Lauder’s Callum Atkinson, with Keith Riddick navigating, won Class 7 in a Ford Fiesta ST, while  John MacCrone and Stuart Louden in a Ford Fiesta R200 took the overall win in the 1600cc category. However, maximum championship points went to the Dalbeattie-based Vauxhall Nova crew of Iain Wilson and Keith Fremantle, who made amends after crashing out on the Snowman.

Iain Haining, with Mairi Riddick co-driving, also bounced back from a non-finish on the season-opener, with a dominant display in Class 3 in his Vauxhall Nova:

“We had a couple of minor niggles – the heater motor packed up and it steamed up a wee bit, and  one of the bolts fell out of the rear wheel-hub on the passenger side. We heard it rattling going into the fourth stage, so we borrowed a spanner at the start and tightened them up”.

Haining ended the day two-and-a-half minutes in front of nearest rivals Charles Blair and Mark Roberts – who were the top-placed Peugeot 205 crew:

“We were leading the class after the first stage, but Iain took a good chunk out of us on stage two and we decided just to take it steady and make sure we stayed in front amongst the 205’s. So a really good day for us”, said Blair.

Scott Macbeth from Rosemarkie, and Kintore co-driver Ashleigh Will took the victory in Class 2 in their Vauxhall Nova.

“It was my first time driving in snow, so it was a  bit of a learning curve. The car was mis-firing a bit as well – we’ll need to get that sorted”, said Macbeth.

There were twenty-seven retirements, among them Mike Faulkner and Peter Foy – third on the previous round – who crashed out in their EVO 9 on the final stage. There were also DNF’s for Portlethen’s Chris Collie, who went off on the opening test in his EVO 6, and Inverness crew Donnie Macdonald and Andrew Falconer, who went out on the fourth stage in their EVO.

The third round of the ARR Craib MSA Scottish Rally Championship is the Coltel Granite City Rally in Aberdeen on April 26th.