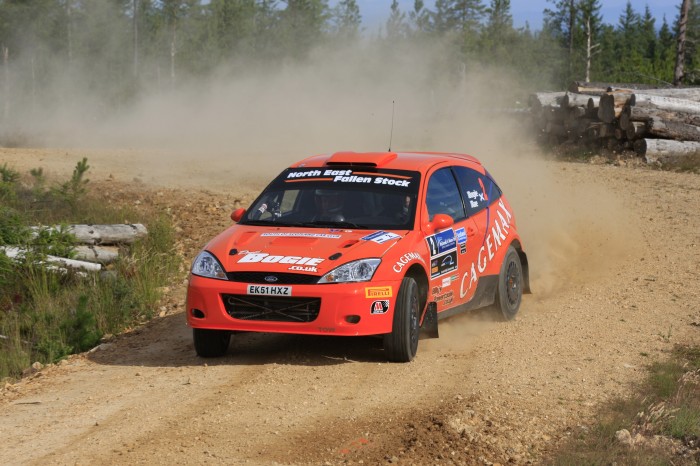 Defending champions Bogie and co-driver Kevin Rae will be targeting their fourth McCombie Builders Granite City Rally win, after a dominant display on the Border Counties last month in their Ford Focus WRC, while Thorburn and  Paul Beaton, also in a Focus, are looking to regain the upper hand following  victory on the season-opener in Inverness.

The “Granite” has attracted another first-class entry of 110 crews, who will tackle forty-four miles of classic forest stages in Kincardineshire.

Bogie, for whom victory on the event last year was his first in the Focus, relishes the annual visit to the north-east of Scotland:

“For me, it’s one of the highlights of the season”, said the five-time champion: “There’s great enthusiasm for rallying in that part of the country. The organising committee always pull out all the stops, and the stages are among the best on the championship calendar. They’re real drivers’ stages, very wide in places. There are four this year, each at around ten miles, and at that length, you can really get into your stride”.

Third seed Jock Armstrong , with Paula Swinscoe on the notes, will want to maintain momentum after posting a strong fourth place overall on the Border Counties.  Twelve months ago, the Castle Douglas driver was locked in a battle with Bogie for top honours when the engine of his Subaru Impreza blew up on the penultimate stage.

Quintin Milne, who was fourth on last year’s Granite, starts one place further back in his Mitsubishi EVO 9. The Banchory driver, co-driven by Martin Forrest of Aberdeen,  has a second and a fifth place finish to his name so far this season, and can count on strong home support next weekend.

Mike Faulkner and Peter Foy – winners in Aberdeen in 2009 – will be keen to banish memories of the previous round in Jedburgh, following an uncharacteristic excursion into a ditch on the final stage:

“The car wasn’t damaged, but it was very frustrating”, said Faulkner: “We were enjoying our battle with Quinton and had to push on the last stage and just got caught out. However, we were pleased with our pace and times, and look forward to the same on the Granite.  The plan is to try and battle with Jock and Quinton and see how close we can get if the WRC’s hit trouble. We now have three to deal with, following Andy Horne’s recent purchase”.

Stonehaven’s Barry Groundwater has had a reasonable start to his 2014 campaign, alongside Neil Shanks from Elgin. The pair finished fifth on the Snowman, followed by seventh overall on the Border Counties, where the tricky conditions hampered an all-out attack.

Chris Collie – runner-up on the Granite in 2013 – returns to the fray with navigator Mark Fisher after a stage one “off” on the previous round in his Mitsubishi EVO 6. They start one place ahead of Inverness duo Donnie Macdonald and Andrew Falconer, who also fell foul of the Kielder Stages in their EVO 9.

There will be great interest in the aforementioned Andy Horne when he makes his debut behind the wheel of a Focus WRC, with navigator Jim Howie of Kilmarnock.  Horne won the Aberdeen round in 2007 in his venerable – and unforgettable – DAM 4100GTi .

Rally sponsor Bruce McCombie, co-driven by Michael Coutts, starts as tenth seed in his Mitsubishi EVO 9. The Banchory competitor has recorded top-ten finishes on the frst two rounds, and will be keen to put on a good show on his home event.

Andrew Gallacher, with Phil Sandham on the notes, leads the Group N challenge in his EVO,  after an impressive sixth place overall on the Border Counties, followed by the EVO’s of Dougal Brown/Lewis Rochford; Alistair and Colin Inglis; and Northern Ireland’s Brendan Cumiskey/Conor Foley, who impressed with an eighth-place finish in Jedburgh.

Provided there are no reliability issues, Newton Stewart’s Mark McCulloch, with Jim Haugh on the notes, has the pace to finish inside the top ten in his Subaru Impreza, while John Morrison and Fraser Wilson will be looking for a good haul of GpN points in their respective EVO’s.

John MacCrone will be targeting his second overall victory in the 1600cc category in his Ford Fiesta R200, while among the SRC-registered drivers, Peter Stewart (Ford Fiesta R2); Kieran Renton (Ford Fiesta); Greg McKnight (Ford Escort Mk2); and Alasdair S Graham (Vauxhall Corsa) will all be pushing to get points on the board.

Graeme Schoneville (Honda Civic Type R) and Border Counties winner Callum Atkinson (Ford Fiesta) are among the favourites for Class 7 honours, while Colin Aitchison, with Garry Pearson on the notes, comes off the back of a Class 9 win in Jedburgh in his Vauxhall Chevette. Ayrshire’s Robert Harkness, with Mike Curry of Lockerbie on the notes, will be looking to make amends for a DNF on the Border Counties in his BMW 316i.

Dumfries and Galloway’s Iain Haining and Mairi Riddick will be the crew to beat in Class 3 in their Vauxhall Nova, but are likely to face strong competition from, among others, Chuck Blair and Mark Roberts, who were the leading Peugeot 205Gti crew on the previous round.

Border Counties Class 2 winner Scott MacBeth, with Scott Hunter on the notes, takes to the Kincardineshire stages in his Vauxhall Nova: ahead of the Corsa of Derek Connell and Laura Marshall, who were runners-up last time out.

Event details, including a full entry list, can be found at www.admc.org.uk