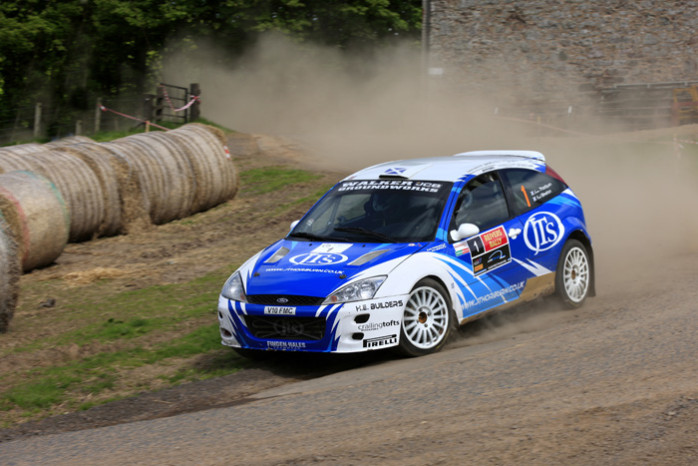 Euan Thorburn goes into his home event in Duns with an eight point lead in the 2014 ARR Craib MSA Scottish Rally Championship after three rounds.

The Borderer, who won the season-opener in Inverness, steered his Ford Focus WRC to a thirty-seven second victory on last month’s Granite City Rally, and is looking for further success on the SRC’s only tarmac round, the Jim Clark Reivers, on Sunday June 1st:

“We’ve never started that well in the Scottish championship, so to have built up a wee cushion after three rounds is a new experience,” said Thorburn, who, with co-driver Paul Beaton, successfully defended his Plains Rally title in the BTRDA series last weekend.

On the Reivers, Thorburn will resume his duel with defending multiple-champion and fellow Focus driver David Bogie.

Twelve months ago, the 26-year-old from Dumfries chalked up his fourth win on the Berwickshire stages, alongside navigator Kevin Rae from Hawick:

“The aim has to be to come away with another win and get our campaign back on track after our non-finish on the Granite because of engine problems”, said Bogie: “Last year’s Reivers was the first tarmac event in the Focus, and we spent the whole day adjusting the suspension settings and getting a feel for the car. A year on we have far more experience of its capabilities in all conditions”.

Jock Armstrong and Paula Swinscoe will start at number three  – the pair buoyed by a fine second-place finish on the Granite.  The Castle Douglas competitor was sitting third behind Thorburn and Bogie on last year’s Reivers when his Subaru Impreza picked up a puncture, knocking him back to ninth overall in the final results.

Stonehaven’s Barry Groundwater and co-driver Neil Shanks from Elgin, who took the final podium spot in Duns in 2013, will line up as fourth seeds in their Mitsubishi EVO 9, one place ahead of Mike Faulkner and Peter Foy, who clinched a hard-earned final podium spot on the Granite in their EVO.

The Reivers has provided mixed fortunes for the duo. Last year a failed rear damper a few miles in put the car off the road at high speed, wrecking the engine:

“As a result of last year’s early exit, we really haven’t had any tarmac miles in our current car, so the aim has to be to finish the rally”, said Faulkner: “Also, as the only tarmac round in the championship calendar, the Reivers can be unpredictable. There are probably more names in the mix capable of producing a surprise result”.

“The past few weeks have been fraught for us. Not only have we had to rebuild the centre diff which gave us problems on the Granite, but the engine dropped a valve, so we’ve been busy with an engine rebuild as well”.

Tarmac specialists Alistair and Colin Inglis achieved their best ever SRC result on the Reivers last year, ending the day  fourth overall. While not registered for the 2014 championship, the pair will be pushing for another top five finish in their EVO 5. Dom Buckley, with Patrick Walsh co-driving, will be another local hopeful in his Subaru Impreza – the Kelso driver placed seventh overall in 2013.

Among the SRC regulars, the EVO 9 crew of Donnie Macdonald and Andrew Falconer from Inverness will head to Duns boosted by a fifth place on the Granite – following two consecutive DNF’s.

Ninth seeds Steve Bannister and Louise Sutherland were also in fine form in Aberdeen, emerging as the leading SRC two-wheel drive crew. The Yorkshireman powered his Ford Escort Mk2 to  eleventh overall on the Berwickshire tarmac stages in 2013.

Andrew Gallacher and Phil Sandham (Mitsubishi EVO 9) will be chasing maximum points in the Group N category, after being pipped by Fraser Wilson and Jane Nicol, also in an EVO 9, on the Aberdeenshire round.

Third-placed Dale Robertson from Duns and Tranent navigator Paul Maguire, meanwhile, have been steadily regaining confidence through the early rounds of 2014, after their EVO was completely burnt out following a crash on last year’s Jim Clark:

“Paul and I were both still in the car when it caught fire”, recalled Robertson: “I looked across and couldn’t see him for flames, and because he couldn’t get out of his door, he had to clamber through them. It was a big fright. Thanks to our loyal sponsors we were able to source a replacement car in Ireland for this year, and we’re only now getting back to where we want to be”.

Portlethen’s Chris Collie, co-driven by Mark Fisher, will be targeting a top-ten spot in his Mitsubishi EVO 6, as will Rory Young and Allan Cathers in their EVO 5.

Another to watch will be Mark McCulloch, with Jim Haugh on the notes, in his Subaru Impreza. The Newton Stewart driver recorded his best SRC result – sixth overall – on the Granite, but knows the tarmac will present a very different challenge:

“The Jim Clark is one of my favourite events of the year but unfortunately it’s also my unluckiest – I’ve only had three finishes from seven starts”, said McCulloch: “A good points haul, hopefully in the top ten, would be a great result for us. Jim and I are working really well together, and we’ll aim to be on the pace right from the start”.

Among the 2WD competitors, Graeme Schoneville from Glasgow, with Michael Hendry co-driving, will be looking for a repeat of his Class 7 success on the Granite in his Honda Civic Type-R.

In the 1600cc category, Carl and Rob Tuer from Alnwick will be targeting a third successive class win on the Reivers in their MG ZR S1600. They will face strong competition from, among others, Paisley’s Alasdair S Graham who, with co-driver Laura Stuart, took maximum points in Aberdeen in his Vauxhall Corsa, and Dumfriesshire duo Greg and Chris McKnight in a Ford Escort Mk 2.

Coldstream’s Kieran Renton, co-driven by Dave Robson, will also be looking to impress in front of home support in his Ford Fiesta R2:

“I really like the tarmac, but it’s a completely different style of driving – you can’t throw the car around as you can in the forests”, said Renton: “In the 1600 class we have to watch our driveshafts because there’s so much more grip, and you’re going at higher speed around the corners”.

Dumfries and Galloway’s Iain Haining and Mairi Riddick (Vauxhall Nova) will be the crew to beat in Class 3 – the pair taking their second successive victory in Aberdeen, while young Ayr driver Derek Connell, with Laura Marshall navigating, will be looking to keep up the momentum after winning Class 2 last time out in his Vauxhall Corsa.

In total, the Jim Clark Reivers Rally has attracted an entry list of around 120 crews.

Full details can be found at www.jimclarkrally.com