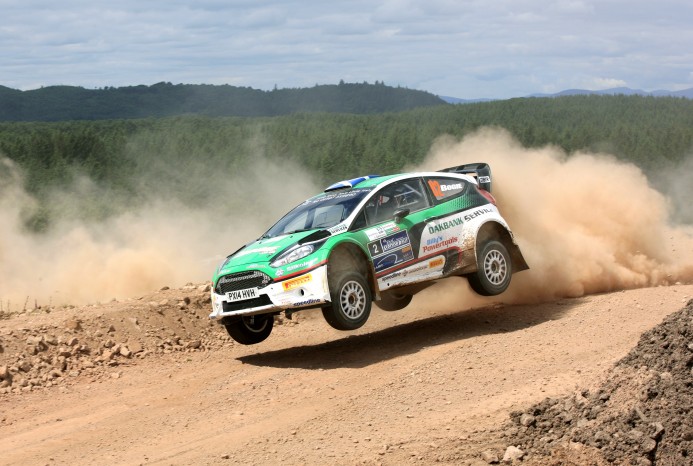 David Bogie kept his nose in front to chalk up a debut win in his new Ford Fiesta R5+ on Saturday’s RSAC Scottish Rally.

The Dumfries driver, with Kevin Rae navigating, was fastest through five of the seven stages in a total time of 41 minutes 33.8 seconds, just 3.5 seconds ahead of last year’s “Scottish” winners Euan Thorburn and Paul Beaton in a Ford Focus WRC.

Bogie had gone into his home round of the ARR Craib MSA Scottish Rally Championship still unsure of the true pace of the 1600cc R5+ compared to that of his main rivals.

The defending champion threw down an early marker – emerging from the opening Windy Hill stage with a five second advantage over Thorburn, who had faltered on the start line. Banchory’s Quintin Milne was sitting third, a further nine seconds back, in his recently-acquired Focus WRC. The car just made it to the official start in Dumfries, following a last minute gearbox rebuild.

Thorburn was hit by a puncture one and a half miles from the end of stage two, Ae West, losing another two seconds to Bogie. Erstwhile championship front-runner Steven Clark had an impressive run in his EVO 5 to move into third overall, with Mark McCulloch in a Subaru Impreza fourth, and Milne slipping to fifth.

The front two held station through the three following tests, which included the sprints through two spectator stages – “Jock’s” and Heathhall. Milne, co-driven by Martin Forrest,  had moved back into third overall, although he would later retire with mechanical problems after going off on the penultimate stage. Meanwhile, McCulloch and navigator Jim Haugh’s challenge ended when they crashed out on stage three.

The two afternoon stages –  Twiglees and Castle O’er – were, as described by Thorburn, “real driver’s stages”, and through both he took time out of Bogie. However, the champion held his nerve to emerge as a relieved – and happy – three-time winner of the Dumfries round:

“It was a real learning experience – adapting my driving style, my braking lines, everything”, said Bogie: “Euan took five seconds off us on the second last stage which I think shows that when you get up to the high speed stuff the 1600 can’t really compete, that’s when you start to notice the difference. On the last stage we got a bit of dust hanging in the trees, so we didn’t push it”

He went on: “Some people were expecting amazing things from this car, and others were a bit more realistic. I wouldn’t say it’s an easy car to drive by any means, certainly on the looser sections, the more technical sections, my previous Focus would have been an easier car, with the active diffs. So knowing that, I’m quite pleased with myself, and how we’ve finished up. One thing I would add is that tyre wear is excessive with this car – we’ll just have to keep throwing tyres at it”.

For his part, Thorburn rued what might have been: “Our pace in the afternoon was much better, and it was good that we could take the fight to David. We said at the start of the day that Castle O’er and Twiglees were the best stages of the day  –  and so it proved. I like the tight and twisty stuff, the Ae stages were too straight and open for me. But, that said, we’d lost it in the morning with the stall on the first stage,and a puncture on the second”.

Armstrong had also got into his stride on the final two stages – the Castle Douglas driver posting the third fastest time through Twiglees, and the same again on the final test: “We’ve got a result and we’ve got some decent points. I made a mistake on the second last, and we were careering sideways on some loose gravel. We hit a tree stump, and it flicked us round the other way, so we got away with it thanks to a little bit of luck. All in all, I’m quite happy”.

Although not involved in the championship chase this year, Andy Horne, with Jim Howie on the notes, had an impressive run in his “new” Focus WRC to finish fourth overall: “Thoroughly enjoyed it. The car is fantastic, and long may it continue”.

Mike Faulkner was less enthused about his fifth place finish in the Mitsubishi EVO 9: “We were right on it, and were battling with Jock, but  Quintin went off and came back out in front of us on the second last stage, and we had to sit behind him for five miles. He pulled over eventually, but we lost a lot of time, and any hopes of a podium finish had gone”.

Stonehaven’s Barry Groundwater had a “good steady run, no dramas” in his EVO 9 to secure sixth overall alongside Elgin navigator Neil Shanks, the pair finishing twenty seconds ahead of the non-SRC registered Steven Clark, co-driven by Phil Sandham:

“We drove for seven miles with a broken driveshaft on the third stage – so we only had rear-wheel drive. We lost about a minute and a half all told, but in the circumstances, that wasn’t too bad”, said Clark.

Inverness duo Dougal Brown and Lewis Rochford ended the day sixth in the championship points, eighth overall, in their EVO 9:

“We’ve had a good clean run. It was our aim to make it into the top ten and we’ve done that, so happy to be here”, said Brown at the finish at Whitesands in Dumfries.

Portlethen’s Chris Collie, co-driven by Mark Fisher, had day-long problems with the turbo boost but still managed to salvage a hard-earned ninth overall in his EVO 6, while tenth place went to Craig McMiken and Craig Wallace in their EVO 9: “We got quicker as the day wore on and the last two stages were very good”, said McMiken.

Fellow Wigtownshire driver Fraser Wilson, with Jane Nicol on the notes, battled through a difficult day to take the honours “as last man standing” in the Group N category in his Mitsubishi EVO 9, having seen main rival Andrew Gallacher roll his EVO on the opening stage. “Thank God that’s finished!”, declared Wilson, who finished 30th overall after driving much of the penultimate Twiglees stage with a front puncture, which shredded the tyre on the rim.

Greg McKnight, with father Chris alongside, had an excellent run in front of home support in his Ford Escort Mk2 to finish as first 2WD competitor, a very impressive 12th overall, and win the 1600cc category – which he was already leading going into the event. The Penpont driver also consolidated his advantage in the Junior Drivers’ championship. Fellow “Junior” Kieran Renton from Coldstream, co-driven by Jack Morton, was second in class, a further forty seconds back in his Ford Fiesta R200, with Peter Stewart and Kenneth Marchbank third, also in a Fiesta.

After a lengthy debate over stage times, the Castle Douglas crew of Scott Peacock and navigator Craig Service emerged as winners of Class 3 in their Peugeot 205Gti, ahead of that of Chuck Blair and Mark Roberts from Dumfries.

The Highland crew of Scott MacBeth and Danny Sutherland were convincing winners of Class 2 in their Vauxhall Nova – despite a couple of scares after the car nose-dived off a jump in the short Dalbeattie spectator stage, and then cut out in the water-splash at Heathhall.  Local duo Angus Lawrie and George Myatt were runners-up, also in a Nova, with Keith and Kirsty Riddick from Haugh of Urr third in an MG ZR.

There were also class wins for Lauder’s Callum Atkinson and James Aldridge in a Ford Fiesta, and Stewarton’s Robert Harkness, with Mike Curry co-driving, in a BMW 316i.

Championship Clubman 2WD leader Steve Bannister, with Louise Rae navigating, was competing in his Escort Mk2 in the historic rally, which ran at the front of the field. However, a rear puncture on the third stage put paid to an outright victory, and he had to settle for second to Matthew Robinson.

It proved a day of attrition for many, with 29 retirements from a start list of 77.

The next round of the ARR Craib MSA Scottish Rally Championship is the McDonald & Munro Speyside Stages in Elgin on Saturday, August 2nd.