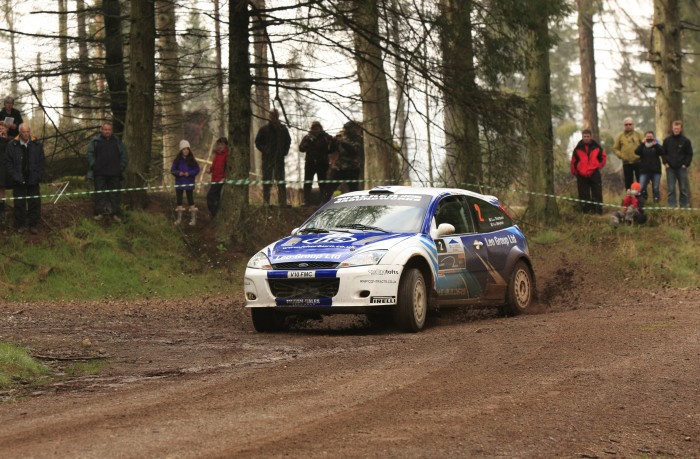 At the same time, the Dumfries driver is fully aware that on the classic fast stages of the Galloway Forest, the Ford Fiesta R5+ could lose out to the more powerful Ford Focus WRC of main rival Euan Thorburn.

The Duns’ man, who has two wins and three second-place finishes so far this season, has a twenty-three-point cushion over Barry Groundwater, who is sitting out this round. Bogie, with three wins, a fourth-place, and a non-finish, is a further five points adrift in third spot.

With the final championship placings decided on the best six scores from eight, both Thorburn and Bogie know that the Merrick is a “make or break” round.

“Having lost out narrowly to David on the Scottish and the Speyside, we need to win the Merrick and the last two rounds if we’re to have any chance of taking the title”, said Thorburn.

Bogie, the five-time champion with navigator Kevin Rae, is equally focussed about making it onto the top step of the podium:

“Euan and I certainly need wins from now on. The cushion he has – if he doesn’t get wins – means he can fall back on some good results, but when dropped scores come into account, the championship does take a fair shuffle. Ultimately it comes down to Euan and I driving as fast as we can from hereon in”.

He went on: “Certainly confidence is high after two wins from two. On the Speyside Stages, I felt I was handling the R5 a lot better – as it should be driven. However, on the downside, I think we could be at a disadvantage on the Merrick. The 1600 engine will be down on power compared to the 2-litre Focus, so I think we’re really going to have our work cut out. If a win comes our way then we’ll be happy – if not we’ll need to keep focussed and concentrate on the remaining two rounds”.

A number of drivers will be waiting to pounce should either of the leading seeds falter, not least Jock Armstrong, who won the Merrick in 2009. Co-driven by Paula Swinscoe, the Castle Douglas competitor took his third final podium spot of 2014 on the Speyside in his Subaru Impreza. With a second-place finish on the Granite City earlier in the season, he currently sits fourth in the overall drivers’ standings, seven points shy of Bogie:

“Our second stage accident on last year’s Merrick is still quite fresh in the mind as I still suffer a few aches and pains!”, said Armstrong: “However, we really need a good score on this one. I enjoy the stages in the west. They’re very grippy and fast flowing, and Glentrool is where I first rallied, so it has good memories for me”.

Armstrong was pushed hard on the Speyside by another former Merrick winner, Mike Faulkner, who is just three points further back in the championship. The Mitsubishi EVO 9 driver, who sprayed the champagne in Wigtown in 2011 with navigator Peter Foy, has been left frustrated on the last two rounds – finishing fourth on both occasions – but is targeting a strong finish next weekend:

“We’re both really looking forward to the Merrick. The stages are a real challenge and reward the committed driver”, said Faulkner: “After two fourths on the trot, we’ll be pushing 100 percent to try and sneak onto the podium. The car has been great and we feel we’ve been driving well this year. It’s been a real close battle with Jock and we relish the prospect of another tussle, but as ever with the Scottish championship, there’s a host of other drivers who could get in front of us, so we take nothing for granted”.

Donnie MacDonald and Andrew Falconer will make the journey south from Inverness to try to try to keep the momentum going after a seventh overall on the Speyside in their EVO 9, while fellow Highlanders Dougal Brown and Lewis Rochford will also be pushing for a top-five in an EVO. The duo are currently sixth and fifth respectively in the drivers’ and co-drivers’ championships.

Banchory’s Bruce McCombie, with Michael Coutts on the notes, has also shown consistent pace this season in his EVO 9, finishing a strong fifth last time out in Elgin.

Newton Stewart’s Mark McCulloch, who,with Jim Haugh, recently won the Solway Coast Rally in his Subaru Impreza, will be counting on home support for his local championship round, as will Craig McMiken, co-driven by Craig Wallace, who was ninth overall in 2013 in his EVO 9.

Meanwhile, Fraser Wilson from Port William, co-driven by Jane Nicol, has an eight-point lead in the Group N category. The EVO crew will again face strong competition from Andrew Gallacher, who sits second in the points, and Dale Robertson of Duns, who took the GpN honours on the Speyside.

There is a strong 2-wheel drive entry for the Merrick across all the classes. Steve Bannister and Louise Rae, who led home the SRC-registered 2WD crews on last year’s Merrick, have a ten point advantage in the historic category in their Ford Escort Mk2. In the Clubman 2WD Championship, the Yorkshire-based driver is just two points adrift of Thornhill’s Greg McKnight, also in a Mk2.

The young Dumfriesshire driver, with dad Chris navigating, has had a hugely impressive season so far. He has built up a comfortable lead in the 1600cc class, and the Junior Drivers’ championship, with Kieran Renton from Coldstream, co-driven by Jedburgh’s Dave Robson, currently occupying the runners-up spot in both categories in his Ford Fiesta R200.

Callum Atkinson from Lauder has been the man to beat in Class 7 for FWD cars up to 2000cc. The Ford Fiesta pilot has a twenty-one point lead over Lanarkshire’s Graeme Schoneville in a Honda Civic Type-R, with young Jake Anderson from Fortrose lying third, just three points back, in a Ford Fiesta ST.

In the battle of the Peugeot 205’s, Dumfries driver Chuck Blair will go into the Merrick with a seven-point advantage over Blair Brown from Kinross, with Scott Peacock of Bridge of Dee in third spot, three points behind. In the same class, Iain Haining of Locharbriggs, with Haugh of Urr’s Mairi Riddick navigating, will be aiming to get his campaign back on track in his Vauxhall Nova after a third non-finish of the season in Elgin.

The Class 2 championship has also been keenly contested with Scott MacBeth of Rosemarkie leading the pack in his Vauxhall Corsa, ahead of Ayr’s Derek Connell, also in a Corsa, and Linzi Henderson in an MG ZR: the 18-year-old from Carnwath having already secured the Scottish Ladies championship.

As well as the SRC, the Merrick Stages is also a counter in the Ecosse Challenge, the Five of Clubs Championship, and the championships of the Machars Car Club, and the Scottish Sporting Car Club.

For the fifth successive year, the start and finish, as well as Friday night scrutineering, will be located in front of rally headquarters at the former county buildings in Wigtown.

Further details can be found at www.merrickstages.co.uk