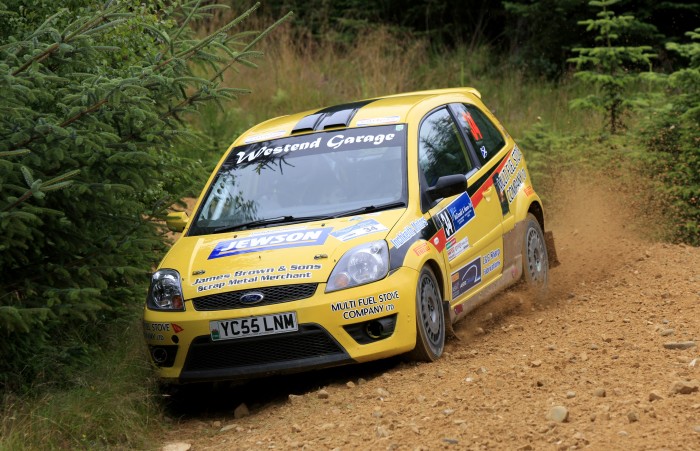 Just some of adjectives expressed by Callum Atkinson after spending last Thursday at the Sweet Lamb test facility in the company of three-times British rally champion Mark Higgins.

The trip to Wales – for a run in an MG S2000 – was part of Callum’s prize for winning the ARR Craib MSA 2013 Scottish Junior Championship: the car courtesy of Calum MacLeod of Royal Aero Group.

“I did two runs of about ten minutes each with Mark beside me in the car”, recalled the Lauder-based driver, who is currently leading the Class 7 championship in his Ford Fiesta : “After the first run we had a debrief, and Mark said he’d enjoyed it, and felt safe, which was good for the confidence. On the second run, I felt I was building up the pace, and going quite well”.

However, the Borderer was almost lost for words when he swapped seats, and the Manx rallying legend got behind the wheel of the S2000:

“I was gob-smacked by the end of it. The way Mark was going into corners – he could make the car turn on a sixpence – it was unbelievable. That run was probably the best experience I’ve ever had in a rally car – and he could tell that from the grin on my face!”

So, what thoughts had Callum brought back from his day in Wales?

“I think confidence is the biggest thing I’ve learned. Believing that the car can do what it wants to do. Mark was pushing me to go further and further before braking, and not to stabe on the brakes. Just go with one solid movement and ease it in. I think that’s what you’ve got to believe in, that you can go that little bit extra, and the car has the capability to go through the corners. If you can take them in a gear higher than everyone else, that’s where you’ll make the gain”.

“I asked Mark what I could do to tranfer everything I’d learned to my Fiesta, and he said the principles were much the same – so I’ll be trying to do just that!”.