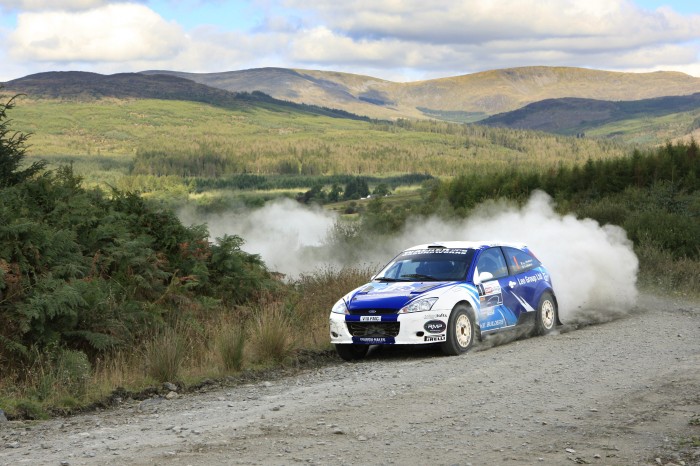 The Duns-based competitor – driving a Ford Focus WRC – led from start to finish alongside co-driver Paul Beaton to complete the six forest stages in Galloway and South Ayrshire in a total time of 40 minutes 38 seconds, thirty-five seconds ahead of Mike Faulkner and Peter Foy in a Mitsubishi EVO 9.

Thorburn’s main rival and defending champion David Bogie secured the final podium spot, after his Ford Fiesta R5+ picked up a front-left puncture on the second stage: the flailing tyre wrecking the wheel-arch.

Thorburn drew first blood, blasting through the four and a half miles of the opening Jenny’s Hill stage, six seconds faster than Bogie, with Faulkner third quickest, just one second back, and Jock Armstrong snapping at his heels in fourth in his Subaru Impreza.

The order was shuffled after SS2 Drumjohn, with Bogie’s R5+ emerging from the twelve and a half miles with a flat tyre and resulting damage to the wheel rim. The five-time champion, co-driven by Kevin Rae, slipped to fourth overall – forty-three seconds down on Thorburn.

Bogie clawed back two seconds with the fastest run through SS3 Auchinleck, while Armstrong and Faulkner were third and fourth quickest respectively. Dougal Brown and Lewis Rochford from Inverness moved up to fifth overall in their Mitsubishi EVO 9, just ahead of the EVO of Dale Robertson from Duns who, with navigator Paul McGuier, led the battle for Group N honours.

There was a further change to the overall order at the conclusion of the short fourth stage, which saw Thorburn and Bogie both beat the bogey time. Armstrong hit problems when the Subaru punctured going into a hairpin and slid off through a ditch. The few seconds lost allowed Bogie to move up to third.

There was little let up in the pace over the remaining two stages, but the top six held station. A delighted, and relieved, Thorburn returned to the finish in Wigtown with his third win of the 2014 campaign safely secured with two rounds remaining:

“We had a thirty second cushion after two stages, but in that situation it’s difficult to judge the pace. You don’t want to take too many risks, but then again, you don’t want to back off too much and make mistakes. Nine times out of ten you’d probably want to be going as hard as you can, but we just controlled the pace, held our lead, and that’s the most important thing for the championship”.

With Bogie on the back foot, Faulkner seized the opportunity to clinch a welcome runner-up spot, after two fourth-place finishes in succession:

“If David hadn’t had his puncture, he’d have beaten us. But we start every event knowing we can only get as close as we can to the top two, and we’re there to capitalise if either have a problem, and that’s what we did. We were right on the limit on the last two stages – we were on soft tyres, which probably helped on the short Balloch test, but not on the nine miles of Arroch Hill. There was little left, that’s for sure!”.

For his part, Bogie – who had been seeking his fourth win of the season – rued what might have been, but admitted that the R5+ struggled to match the pace of Thorburn’s Focus WRC:

“Obviously the puncture spoiled it for us early on in the day. Once we’d recovered from that I felt I was getting the best out of the car, but even on the last stage where Euan had a healthy lead, I never backed off, and he still took a second out of us. I’d nothing left, I couldn’t have driven any harder. I’m disappointed not to get the win, but it’s still points on the board”.

Armstrong, co-driven by Paula Swinscoe, was not too disheartened to miss out on third, after his “excursion” into a ditch two stages from home:

“The puncture was very sudden. The stage had been nice and flowing, but we came into a downhill hairpin which was very loose”, explained the Castle Douglas driver: “As I turned round the hairpin, the car snapped sideways. I got out of the hairpin, but was trying to control the car left and right. It was either go along the top of a banking on one side, or aim for the ditch on the other, which I thought we could get out of, so that’s what we did, but we had a couple of miles with a rear puncture. We calmed down a bit after that on the next stage, and then on the last, the pace at the front picked up quite a bit. By then, though, we knew our day was done”.

Meanwhile, fifth-placed Dougal Brown was delighted with his best result in the Scottish championship:

“Our previous best was a sixth place, so to go one better is a fantastic result for us, and has made the trip down from Inverness really worthwhile. It’s also a good confidence boost going into the last two rounds”.

Dale Robertson was also more than happy with his second GpN win in a row: “Everything has gone pretty well. We had a wee problem with the starter before the last service, but the boys fixed it, and we had a good run in the afternoon, with Paul doing another great job on the notes. We also managed to keep clear of any punctures”.

“We had a decent enough morning, except for a fuel-pump problem”, said Wilson. “On the third stage, while we didn’t think we’d done too badly, Dale and Andrew took two seconds a mile out of us and that was about it from there on. We were kind of behind in the battle, but we can’t complain about where we’ve finished”.

“We had a problem on the second stage when one of the tyres went off completely and we lost a lot of time. I thought it was a puncture, but I think it was heat-related. It’s such a close competition – if you lose ten seconds, you struggle to get it back”.

As predicted, Steve Bannister, with Louise Rae alongside, was the man to beat among the 2-wheel drive competitors. He powered his historic-class Ford Escort Mk2 through the dry and dusty stages to end the day in ninth overall, his second SRC top-ten finish of the season.

Alasdair S.Graham, in a Vauxhall Corsa, finished just nine seconds further back to take a hugely impressive eleventh overall, and first in the 1600cc category, alongside navigator Laura Stuart:

“It’s unbelievable really, to finish just behind a WRC car”, said the Paisley-based driver: “We were right on it from the start. When we came out of the first stage and got the times we thought there must have been some kind of mistake. But after that we just kept our heads down and kept going”.

Ayrshire’s Robert Harkness,with Mike curry on the notes, took his second successive Class 5 victory in his BMW316i, just two seconds ahead of the Subaru Impreza of Lee Hastings and Michael Cruickshanks.

Calum and Claudia MacLeod – over from Germany for the event – were a further three seconds back in fourteenth overall in their distinctive MG S2000, followed by Thornhill’s Greg McKnight, who steered his Ford Escort Mk2 to second in the 1600 class, so maintaining his overall lead. Kieran Renton from Coldstream, with Dave Robson navigating, was third. The pair, covered in “stoor” from the dusty conditions, brought their Ford Fiesta R200 home in seventeenth overall.

The non-championship registered Donald Carslaw, in a Ford Fiesta, took the overall win in Class 7, while second placed Callum Atkinson, with Keith Riddick co-driving, secured maximum points, despite a puncture on the last stage. Nevertheless, the Lauder-based driver added to his already sizeable lead ahead of next month’s Colin McRae Stages.

“I wasn’t feeling too well at the start of the day, so we took it easy on the first stage”, said Blair: “We put the hammer down after that and kept it going all day – it was really fast and we fairly enjoyed it. That’s us now won the Ecosse 205 Challenge as well”.

Blair Brown – who sits second in the championship class – was runner-up on the day in his 205 1.6GTi alongside Richard Simmonds, with Iain Haining and Mairi Riddick third in their Vauxhall Nova, having dropped two and a half minutes changing a punctured tyre on the second stage.

Rosemarkie’s Scott MacBeth was the convincing winner of Class 2 in his Vauxhall Nova, with Angus Lawrie of Castle Douglas second, also in a Nova, and Linzi Henderson third in her MG ZR:

“The stages were brilliant but we caught a car on the last one, and couldn’t see anything with the dust. We were pushing pretty hard today and that’s five class wins on the trot, so we’re just about there”.

David and Douglas Cameron were the sole competitors in Class 5 in their Ford Escort Mk2, finishing the day in 39th overall from 43 classified finishers.

There were nine retirements. They included Donnie MacDonald, who was lying fifth overall in his EVO 9 after two stages, but was forced to pull out with engine problems on the third; and Banchory’s Bruce McCombie who called it a day when his EVO developed gearbox problems. Local hopeful Mark McCulloch, driving a Subaru Impreza, was another casualty: a broken wheel ending his challenge on the sixth stage.

The sixth round of the 2014 ARR Craib MSA Scottish Rally Championship is the Colin McRae Stages in Aberfeldy on October 4th.

Full results from the Merrick Stages can be found at www.flyingfinish.co.uk