Title race intensifies on the McRae 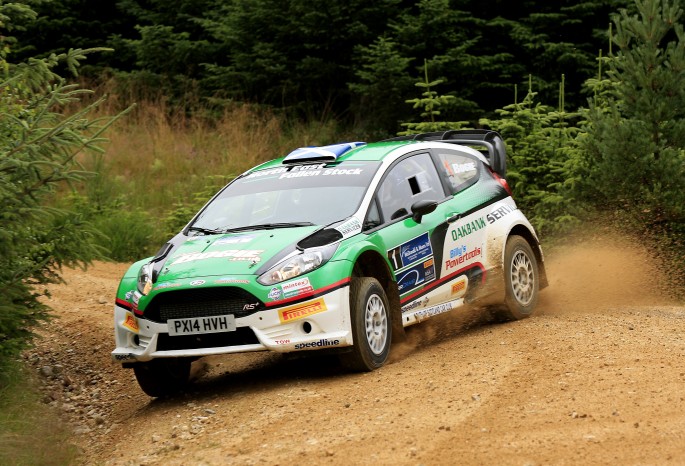 There will be no let up in the duel between Euan Thorburn and David Bogie for the 2014 ARR Craib MSA Scottish Rally Championship as the two go head-to-head on the penultimate round, the Colin McRae Forest Stages.

Thorburn and co-driver Paul Beaton moved closer to securing the Scottish crown with a successful defence of their Merrick Stages title in Galloway last month in their Ford Focus WRC, while Bogie, with Kevin Rae on the notes, had to settle for third after his Ford Fiesta R5+ picked up a puncture on the second stage.

Both crews have each won three rallies in this year’s series. However, with three second-place finishes to his name, and with the title decided on the best six rounds from eight, Thorburn has the better scorecard overall.

Bogie – the defending five-time champion and last year’s McRae winner – has not given up the fight and will be as determined as ever:

“It’s all or nothing!”, declared the Dumfries driver: “In the last five seasons we’ve got to the end of the year and we’ve been in a very strong position. This is probably the first time we’ve been in with a chance of winning the championship but we’re on the back foot. It’s within our reach – but we need to be consistent. There can be no mistakes, or punctures or mechanical issues. Since the Merrick I’ve made two major changes to the car which should increase my pace. One involves suspension, the other the differential – both of which should aid traction”.

For his part, Thorburn, who won in Aberfeldy in 2011, knows that victory this time around could seal him his first championship:

“We have nothing to lose – we’ll be going out to win”, said the Duns-based competitor: “We were leading the event last year until a puncture on the final stage, so hopefully we can make up for that. As for the car, we found a problem with 6th gear after the Merrick. It was caused by changing up too early, because we weren’t driving 100 percent – we were taking it too easy. We’ll certainly not be doing that on the McRae!”.

Third seed Jock Armstrong, co-driven by Paula Swinscoe, has not competed on the Perthshire event since 2010. The Castle Douglas ace, who just missed out on a podium spot on the Merrick in his Subaru Impreza following a puncture, will be ready to pounce should either of the leading pair hit problems:

“We need to get back onto the podium – that’s the number one aim”, said Armstrong: “We’ve had a few tweeks to the car just to perfect the flat shift, and the launch off the line has been adjusted”.

Armstrong has spent much of the season battling for position with Mike Faulkner, who, with Peter Foy, comes off the back of an excellent runners-up spot on the previous round in his Mitsubishi EVO 9:

“The plan is to try and pick up where we left off”, said Faulkner: “We’re under no illusions, it’ll be a lot tougher than the Merrick, where the stages were fast and very loose. They suited the car and my driving. The Perthshire roads are a very different challenge – there’s a bit of everything – and it’ll be much harder to get close to the top two. We want third in the championship, so there’ll be no room for any errors. It’ll be maximum attack from the start”.

While not in the hunt for championship points, John MacCrone, co-driven by Stuart Loudon, could pose a threat to the leading contenders: the Isle of Mull driver having recently stated that he aims to tackle a number of World Rally Championship events next year in his M-Sport Ford Fiesta R5.

Stonehaven’s Barry Groundwater, who sat out the Merrick, is back in action in his EVO 9 alongside Elgin-based navigator Neil Shanks. The pair, who finished second in Aberfeldy in 2012, start one place ahead of Inverness duo Donnie MacDonald and Andrew Falconer, also in an EVO 9. They will be looking to get their campaign back on track after being forced to pull out of the Merrick with engine problems, while lying fifth overall.

Bruce McCombie was another non-finisher in Galloway: his second DNF of the season spoiling what has otherwise been a consistent run behind the wheel of his EVO. The Banchory-based driver, who was tenth on the McRae in 2013, will again be accompanied by Michael Coutts.

Ninth seed Mark McCulloch from Newton Stewart did not fare any better on his home event, and is wanting “a clean run with no issues” in his Subaru Impreza:

“We’ve had the suspension away and repaired after the Merrick, so hopefully that gets rid of the problems we suffered all day”, said McCulloch, who will be co-driven by Jim Haugh: “Ideally we want to be back into the top 10, but the McRae stages are a very mixed bunch, so we’ll have to get some good prep done with the notes. It’s something we haven’t had time to do on the previous few events, because of car problems”.

McCulloch will be followed off the start-line by Chris Collie in an EVO 6. The Aberdeen driver, with Mark Fisher navigating, has only entered three of this year’s six rounds, but has notched up two top-ten finishes.
Dougal Brown and Lewis Rochford will start eleventh in an EVO 9: the Inverness crew have been buoyed by an impressive fifth place overall on the Merrick, their best Scottish championship result.

Wigtownshire’s Fraser Wilson, alongside Jane Nicol from Edinburgh, will be looking to secure the Group N category in his EVO, but will face strong competition from Borderer Dale Robertson, who, with Paul McGuire, has taken maximum points on the last two events.

With the 2-wheel drive competitors running at the front of the field, Malton’s Steve Bannister and Hawick navigator Louise Rae, will be first on the road. The Yorkshireman heads a strong Ford Escort contingent, which includes his long-time rival Matthew Robinson; Alford’s Calum McKenzie, who will be competing on only his second championship round of the season; and Quintin Milne from Banchory, who won the 2012 McRae Stages in an EVO with Martin Forrest.

Ayrshire’s Robert Harkness, with Mike Curry from Lockerbie navigating, will be targeting a fifth successive class win in his BMW 316i, while Greg and Chris McKnight from Dumfries have built up a commanding lead in the 1600cc category in their Ford Escort Mk2, ahead of the Vauxhall Corsa of Alasdair S.Graham and Laura Stuart, who won the Merrick round, and Borders’ crew Kieran Renton and Dave Robson in a Ford Fiesta R2.

The battle for Class 3 honours will be as intense as ever. Leaders Chuck Blair and Mark Roberts from Dumfries will be pitted against fellow Peugeot 205 crew Blair Brown (Kinross) and Richard Simmonds (Duns), as well as the Vauxhall Nova of Iain Haining and Mairi Riddick, who took the spoils in 2013.

Meanwhile, Scott MacBeth from Rosemarkie, with Daniel Sutherland from Golspie navigating, will be looking to wrap up the Class 2 championship in his Vauxhall Nova, after five wins on the trot.

Full details of the Colin McRae Forest Stages can be found at www.coltnesscarclub.com