Thorburn and Beaton are Scottish champions! 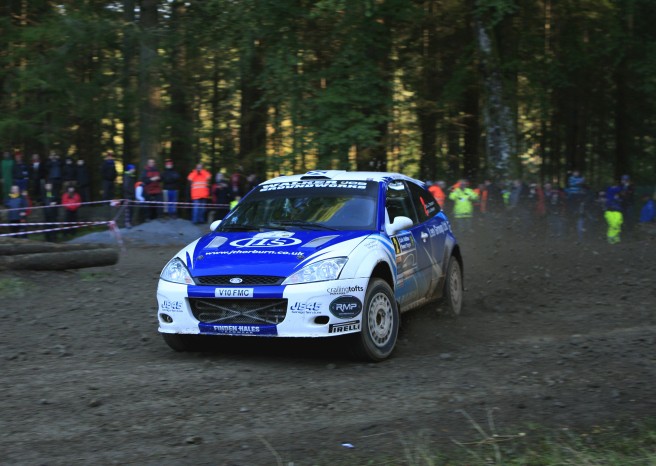 The result adds two new names to the championship trophy for the first time since 2009 – following Bogie’s dominance of the series with navigator Kevin Rae.

Thorburn completed the six Perthshire stages in his Ford Focus WRC in a total time of 43 minutes 51 seconds, two minutes ahead of runners-up Mike Faulkner and Peter Foy in a Mitsubishi EVO 9. Jock Armstrong, with Paula Swinscoe navigating, was third in his Subaru Impreza, a further thirty-five seconds back.

It had been a close-fought battle between the top two throughout the day in challenging, and often slippy conditions.

The Borderer laid down an early marker and was seven seconds up on Bogie after two stages. The defending champion took two seconds back on the third test in his Ford Fiesta R5+, and was seven seconds faster than the Duns’ driver through the near fourteen miles of SS4 Allean. Thorburn hit back on SS5 Drummond Hill and, with one stage remaining, had a two second advantage overall.

However, his Dumfries rival had a major problem – arriving at the second and final service in Aberfeldy with a bent front-left tracking rod after clipping a rock. With no spare available, Bogie looked on while the mechanics went to work on the car, unsure whether he would be able to continue.

After a tense wait, Bogie was given the nod and climbed back into the cockpit for a last “all or nothing” assault on the eleven miles of Craigvinean. Disaster struck a few miles in when the R5+ slid off the road. Thorburn and Beaton, who passed the scene as second car on the stage, had their own scare shortly afterwards when they went straight on at a junction. As they realised that the championship was theirs, it was then a case of making it back to the finish safely.

As the champagne was sprayed in front of a large crowd of supporters and photographers, Thorburn expressed his delight at the achievement:

“I can’t believe it’s happened after all these years trying to win the championship. It was close all day. It’s a shame the way David went off, but that’s the way it goes, we’ve both been on the limit, and thankfully we got through and took the win. When you look at the names on the Scottish championship trophy, it’s great to get your name on there – absolutely brilliant”.

It was a sentiment echoed by Inverness co-driver Paul Beaton: “It’s been a long time coming. We’ve had so much bad luck in recent seasons – with car issues and so on – but this is the one we wanted and we’ve finally done it. It’s something we’ve been dreaming about since we were wee boys. There were a lot of nervous moments today though – that last stage felt like the longest we’ve ever done!”

While the championship outcome was being played out in front of them, Faulkner and Armstrong were involved in their own duel for podium places – the EVO driver securing his second successive runner-up spot with a relatively trouble-free run in the difficult conditions:

“It was really tough and slippy at the end. It was Jock we were battling – it wasn’t the way we wanted to beat David but they were going at it hammer and tongs so one of them had to make a mistake”.

Armstrong’s day was plagued by several punctures, but he was happy to clinch the final podium spot – with the fight for second and third in the championship now going down to the wire on his family-sponsored Galloway Hills Rally at the end of the month:

“To get third is really good after the day we’ve had. We had a push on the last stage, but it was really bad low sunlight and we went off at a 90-left and nearly landed in a ditch. We reversed back and got going again, but it kind of knocked the concentration”.

Barry Groundwater, co-driven by Neil Shanks, was involved involved in his own tussle with Dougal Brown and Lewis Rochford. The Stonehaven driver brought his Mitsubishi EVO 9 home in fourth spot, just four seconds ahead of the Inverness crew. They took their second successive fifth place finish, the highlight of which was a third quickest time through the second stage.

On what was only his second SRC event of the year, Calum Mackenzie, with Alan Clark on the notes, turned in a great performance behind the wheel of his Ford Escort Mk2 to finish sixth overall as the leading 2WD competitor.

The Banchory driver was nine seconds ahead of Dale Robertson from Duns, who nailed the Group N honours in his EVO 9 after seeing main rival Fraser Wilson retire with fuel pump problems.

“We had problems with our brakes and found at second service that we had a broken pipe on the back caliper, so that made it exciting, but we got to the end and have some good points on the board. And we’ve got the GpN win again which is what we were after”, said Robertson, who was co-driven by Paul McGuire from Tranent.

Andrew Gallacher, with navigator Josh Davison, finished eighth in his EVO after a tough opening few stages: “The first was really slippy, and the second was very rough. Then we clipped a rock on the third stage and finished up with the tyre off the rim. Things could only get better, and thankfully they did”.

Banchory’s Bruce McCombie was a further fourteen seconds adrift in his EVO to notch up his fifth top-ten finish of the season alongside Michael Coutts.

The Elgin-based crew of Brian Ross and Sean Donnelly rounded off the top-ten in their EVO 5 on what was Ross’ third championship event of 2014.

Steve Bannister and Louise Rae were second home of the 2WD entries: the Yorkshireman ending the day eleventh overall in his Ford Escort Mk2 after a “cautious run” following an accident on the Trackrod Rally the previous weekend.

Among the other 2WD categories, Paisley’s Alasdair S Graham was “the happiest I’ve ever been” to win the 1600cc class honours in his Vauxhall Corsa alongside navigator Laura Stuart from Alford.

The pair finished fourteenth, three places ahead of Class 4 rival Greg McKnight in a Ford Escort Mk2. They were both on equal times overall going into the final stage, but the young Dumfriesshire driver, with dad Chris on the notes, was hit by a puncture – scuppering his chances of class success. However, he did secure the Scottish Junior Drivers’ championship, at the near conclusion of what has been an extremely impressive campaign.

Iain Haining, with Mairi Riddick on the notes, put his Class 3 win down to the re-discovery of a long-lost pair of driving gloves.

“I lost them after the Border Counties, then we crashed on the Scottish, and lost a wheel on the Speyside – and now the gloves have turned up, we’re back to winning ways, which is a great feeling. Mind you, we had developing gearbox problems on the way to the final stage – I think a bearing has collapsed – it’s really noisy”.

Scott MacBeth, with Daniel Sutherland of Golspie co-driving, made sure of the Class 2 championship in his Vauxhall Corsa: the Rosemarkie driver taking his sixth maximum points haul of the season.

There were 44 classified finishers, and 32 retirements.

The final round of the 2014 ARR Craib MSA Scottish Rally Championship is the Armstrong Galloway Hills Rally in Castle Douglas on Sunday, October 26th.