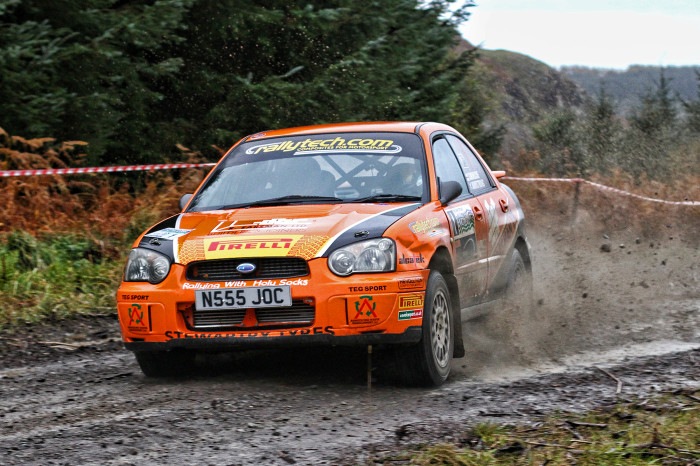 The curtain came down on the 2014 ARR Craib MSA Scottish Rally Championship in dramatic style, with Jock Armstrong winning his seventh Galloway Hills, and securing third spot in the series behind Euan Thorburn and David Bogie.

However, while the Aberdeen driver spun his Subaru Impreza WRC and got stuck in a ditch “for a good two minutes”, Armstrong was in top form to “nail” the victory in his Subaru.

He finished twenty-two seconds ahead of Bogie who, with Kevin Rae alongside, used the event to fine-tune his Ford Fiesta R5 in preparation for next month’s Wales Rally GB.

Desi Henry and Damien Duffin, one of twenty-four Irish crews who took the ferry over for the “Hills”, clinched the final podium spot overall in a Mitsubishi EVO 9, with Dougal Brown and Lewis Rochford from Inverness capping an impressive season by finishing third of the SRC- registered competitors in their EVO.

In increasingly wet and miserable conditions, Weston and Armstrong set identical fastest times through the opening Glengap stage, ahead of Bogie, Henry, and Newton Stewart’s Craig McMiken who was fifth quickest in his EVO 9. Mike Faulkner and Peter Foy, also in an EVO, went into the event dueling with Armstrong for third in the championship, but were hit by turbo problems, and dropped down the leaderboard.

Armstrong lost six seconds to Weston at the very start of the second Laggan O’Dee stage: “We waited so long, perhaps a good ten minutes, and then when it came to go, I hadn’t put the car in gear!”. Meanwhile, Bogie and Henry held station in third and fourth respectively, but McMiken and co-driver Craig Wallace came to grief when they crashed out about two miles in. It resulted in McMiken being taken to hospital by ambulance for checks, but it was later reported that “while a little sore, everything was fine”.

The leading positions, with Brown and Rochford now lying fifth, remained the same through the next three stages – including the “super special” at Auchenlosh – and then it was on to the last Dalbeattie test for a final showdown.

Armstrong arrived back at the finish in Castle Douglas in upbeat mood but still unsure about whether he was first or second, before word filtered through about Weston’s problems:

“The pressure was really on”, said a delighted Armstrong: “That Dalbeattie stage is really tricky, but when we came out I said to Paula that we had got some really good lines in there, along with good exits at most of the corners, so I felt confident driving back to the finish. And then word came through that we’d nailed it. I was beginning to think I’d never achieve a seventh win on my local rally, so it’s a fantastic feeling”. Co-driver Swinscoe summed it up as “the zenith of a challenging but enjoyable season”.

For his part, Bogie was more than happy with the significant changes to his car, which will set him up for his international debut in Wales in mid-November:

“I was really encouraged with our pace, given that we were running at reduced power, with new tyres and different fuel, to comply with WRC regulations”, said the five-times Scottish champion: “We made changes to the suspension – again that improved the car – and we found a better grip level with the tyres, so all these changes for Wales Rally GB have worked perfectly”.

For Brown and Rochford the long journey down from Inverness proved extremely worthwhile as they sprayed the champagne in third spot on the championship podium:

“It’s fantastic, after top-five finishes on the two previous rounds”, said Brown: “We’ve been pushing harder and harder as the season has gone on – getting more consistent and committed – and that’s increased the confidence”.

The Highland duo ended the day twenty-one seconds ahead of Faulkner and Foy, who fought back in customary fashion after their early troubles to take fifth overall:

“If you could just forget about stage one then it would have been a good day but even without that, we wouldn’t have beaten Jock today – he’s been right on the pace since the start”, said Faulkner: “We had a real push in the afternoon, and we were getting close, but he’s the deserved winner today, definitely”.

“We were three seconds up on Fraser going into the last stage, and then we both recorded the exact same times, it was as close as that”, said the Duns-based driver, who had lost some time earlier in the day when he hit a straw bale: “It’s been a great battle all season, and to finally get the GpN title in the bag is absolutely brilliant”.

Wilson, with Jane Nicol on the notes, rued what might have been, but at least had the consolation of knowing he had won Class 10 in the championship: “We gave it everything to win the GpN category – including eleven new tyres on the car during the day, I’ve never used so many on one round – but it wasn’t too be. We lost it to Dale on the super-special stage, and we had problems with the diff and speed-sensor on the car – I’m not sure whether that had any effect – but to just miss out by three seconds, what can I say – terrible!”

Weston and Riddick eventually ended eighth overall, two seconds ahead of Peter Taylor and Jack Morton in a Ford Fiesta S2400 with Andrew Gallacher and navigator Ross Hynd rounding off the top-ten in their EVO 9.

Steve Bannister and Louise Rae were first home of the SRC-registered 2WD entries in their historic-spec Mk2, ending the day in seventeenth overall:

“All in all it’s been a good event and the car has performed well”, said the Yorkshireman: “The stages were greasy – but you’d expect that with the weather conditions. Even the second time through Glengap, it wasn’t as cut up as it might have been so the organisers will have been pleased with that”.

Coldstream’s Kieran Renton, with Dave Robson from Jedburgh navigating, took top honours in the 1600cc category, twentieth overall. He described his Ford Fiesta R200 as being “a completely different car” after a hole “as big as a size seven shoe” was discovered in the engine block, accounting for some lack-lustre performances on previous rounds. Alasdair S.Graham, who won the class on the McRae Stages with Laura Stuart on the notes, had to settle for second in his Vauxhall Corsa – five places further back in 25th.

There was a top-thirty finish for local driver Angus Lawrie, co-driven by George Myatt co-driving”, who survived “a really stressful day” to win Class 2 in his Vauxhall Nova, with non-SRC registered Keith Riddick, paired with Andrew Falconer from Inverness, completing his first Galloway Hills as runner up in the same class in his MG ZR.

Chuck Blair and Mark Roberts from Dumfries only had to cross the start-line to make sure of the Class 3 championship in their Peugeot 205GTi. They ended four places behind up-and-coming young Kinross driver Blair Brown, co-driven by Richard Simmonds from Duns, who secured second in class in the overall standings in his 205.

For full results go to www.scotresults.co.uk

** denotes not registered with the Scottish championship