Border Counties Returns to its Roots 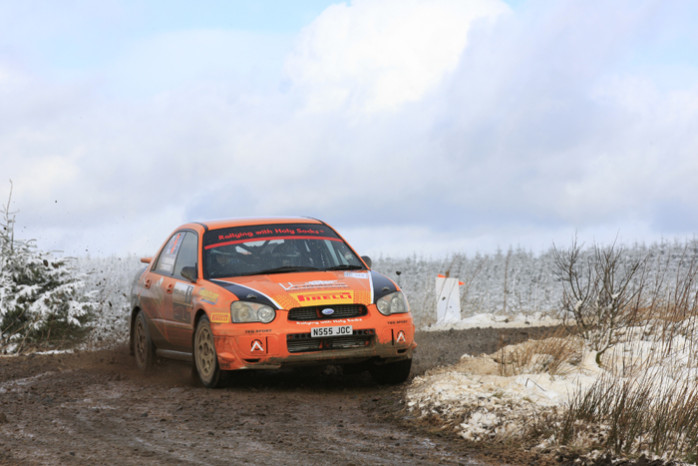 Around 90 crews will gather in Jedburgh this Saturday 21st March for the 2nd round of the 2015 ARRCraib Scottish Rally Championship, the Border Counties Rally.  In the year when a 13 year long sponsorship deal with Brick & Steel comes to an end, the event is returning to some of the Tweed Valley stages west of Galashiels not used on an SRC event since 2001.

Leading the field away are last year’s winners and 5 times Scottish Champions David Bogie & Kevin Rae, back out after their retirement on round 1 in their Fiesta R5+ until the appearance of a long-awaited ‘new’ Mk2 Escort in the not too distant future.

Snowman winners Jock Armstrong & Paula Swinscoe start second on the road in their Impreza, hoping to improve on last year’s 3rd place finish and maintain their perfect start to the season.

Mike Faulkner & Peter Foy start 3rd in their Mitsubishi Evo 9, looking to take the fight to the crews ahead once again.  Rather frustrated to finish 3rd on round 1,  Mike is one of probably only a handful of drivers on the event who will have competed over the Tweed Valley stages. Only time will tell if this proves to be an advantage or not.

Behind the non-registered Fiesta R5+ of Stephen Petch & Jack Morton is 2013 Border Counties winner Quintin Milne with Irishman Stephen O’Hanlon reading the notes once again in their Evo 6.  Brake problems restricted their progress on round 1 and with the stages likely to be clear of snow for the first time since 2012, it will be interesting to see how the new car performs in less difficult road conditions.

Fresh from their career best 2nd place finish on the Snowman, Banchory crew Bruce McCombie & Michael Coutts have stayed true to their word and travelled south to try and cement their excellent start to the season in their Evo 9.

Donnie MacDonald & Andrew Falconer will also make the long trip south from Inverness once again after their confidence-building 4th place finish on their local event, looking to build a series of strong results in their Evo 9 after a disastrous season in 2014.

Stonehaven’s Barry Groundwater is reunited with regular co-driver Neil Shanks once again after a solid 5th place finish on round 1 with stand-in co-driver Sean Donnelly.

Behind the Fiesta of Peter Taylor & Andrew Roughead and rounding off the top 10 is the unique Fiesta-bodied Evo 9 of Andrew Gallacher & Jane Nicol.  Despite some last minute issues on the eve of the Snowman – which saw them arrive in Inverness in the middle of the night – the car showed real potential, taking a fastest stage time on the way to an 8th place finish.  Another run out in the car on the Malcolm Wilson 2 weeks ago netted a strong 5th place finish behind 3 World Rally Cars and a Fiesta R5+, which suggests that they may well be ones to look out for this weekend as they continue to develop and refine the new car.

There were no finishers in the Group N category for showroom specification cars on the first round, although both John Morrison and Fraser Wilson were well inside the top 10 overall before both retiring.  Battle will be rejoined in the Scottish Borders this weekend.

2014 SRC Junior champion Greg McKnight and dad Chris return in their 1600 Escort after a non-finish on the Snowman, looking to be in the mix for top 2 wheel drive bragging rights.  Unfortunately, Snowman class 4 winners Carl & Rob Tuer have been forced to miss one of their local events after the ex-Gwyndaf Evans MG S1600 was destroyed by fire earlier this week.  2014 Colin McRae Flat out award winner Scott Macbeth will be hoping to get further than the first stage this time after fitting a larger 1600 engine in his class 2 winning Nova from last year.

The Border Counties is the first round of the Ecosse Challenge for Peugeot 205’s and the new for 2015 C2 Challenge for Citroen C2’s.  Aberdeen crew Simon Hay & Calum Jaffray took 2nd in class 3 on the Snowman but this time will have a few more 205’s for company.

The Proton Satrias of Mat Smith & Ryan Weston may only have 1400cc engines but their own battle for top class 2 honours may well be one of the highlights of the day, the BTRDA regulars likely to embarrass some more powerful machinery into the bargain.  Meanwhile, Snowman Class 2 winner Thomas Gray makes the long trek south on only his 2nd forest event to take on the Protons in his newly acquired 1300cc Toyota Yaris.

Full entry list and event details can be found at www.bordercountiesrally.co.uk.  Live results on the day are available from the championship web site at www.scottishrallychampionship.co.uk.