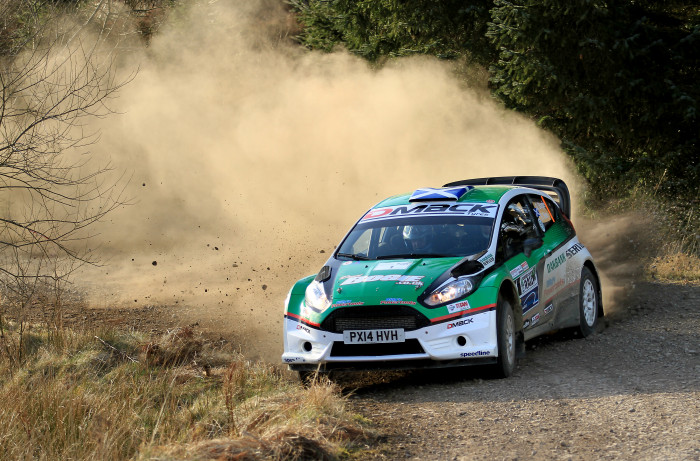 The challenge of tackling stages in the Tweed Valley that they had never done before was enough to entice Bogie & Rae out in their Fiesta R5+, and with fastest time on all 5 competitive stages their winning margin over the similar car of the non-SRC registered Stephen Petch & Jack Morton stretched to 40 seconds by the time crews returned to the finish in Jedburgh.

Losing 3rd overall on the final stages, Andrew Gallacher & Jane Nicol nevertheless took 2nd SRC finishers in the increasingly competitive Fiesta-bodied Evo, a first SRC podium for both and another step forward in the development of the new car.  5th overall, and another crew to take their first ever SRC podium, were Donnie Macdonald & Andrew Falconer.  The Inverness crew won the Evo battle on the day ahead of Bruce McCombie & Michael Coutts who were only 1 second back going into the final stage before a puncture just 2 miles from the end blunted their challenge.  Nevertheless, with the retirement of Snowman winners Jock Armstrong & Paula Swinscoe after SS3 with engine problems, McCombie & Coutts now lead the championship by a single point from Macdonald & Falconer with Gallacher & Nicol 3 points further back.

The battle for 7th overall and 5th SRC was equally close.  Shaun Sinclair & Chris Hamill pipped Barry Groundwater & Neil Shanks by one second on the final stage to tie on total time, but taking 7th place thanks to a faster time through the first stage of the day.  Meanwhile, Mark McCulloch & Michael Hendry finished only 1 second behind after recording a 6th fastest time through the final stage, winning class 11 by just 11 seconds from the fast-improving Freddie Milne & co-driver Martin Forrest.

John Rintoul & Ross Hynd took their 2nd consecutive SRC top 10 finish, just 4 seconds ahead of the Class 10 winning Evo 9 of Fraser Wilson & Craig Wallace who bounced back from their retirement on the first round.

As on the first round, Greg & Chris McKnight were the leading 2 wheel drive runners after 2 stages in their class 4 1600 Mk2 Escort, but once again they were out of luck, retiring on SS4 with engine problems.  Slowed by a first stage puncture, Steve Bannister & Louise Rae recovered to take top 2 wheel drive SRC spot, but Steve was frustrated not to be in a position to battle with fellow Yorkshireman and friend Matthew Robinson’s similar car for top historic. Willie Stuart made the long trip south from Alford to finish 2nd in the historic class in his Mk1 Escort, losing time with a spin and a stall on the final stage.

2nd 2 wheel drive finishers, after another typically exciting drive in the fearsome V6-engined Dolomite Sprint, were Ken Wood and new Irish co-driver Paul Cummins.  Back on home turf, the Insch-domiciled former Scottish Champion took victory in class 9 despite a leaking diff, with the Mk2 Escort of Gordon Murray second, delighted to record his first ever finish in the car on his 8th attempt after a winter rebuild.

Class 2 Junior Ryan Weston may have been a bit disappointed to finish more than a minute behind the similar Proton Satria of the somewhat more experienced Mat Smith, but 28th overall and 3rd SRC 2 wheel drive finisher in a 1400 car is not too shabby.  Thomas Gray’s long trip south from Elgin was rewarded with 2nd in class in his Toyota Yaris.

Tying with the Satria and taking their 2nd consecutive class 7 win were Ross Macdonald & Matthew Johnstone in the 2-litre Honda Civic, ahead of the Fiesta ST of Caroline Carslaw & John Duke.

Following his first stage retirement on the Snowman, Scott Macbeth and co-driver David Wilson lacked confidence all day in the slippery conditions, but survived to win class 4 in their 1600 Nova by 8 just seconds from the Corsa of Alex Curran & Heather Grisedale.

In class 3, Simon Hay & Calum Jaffray followed up their 2nd place on the Snowman in their Peugeot 205 with their first SRC class victory on what was the first round of the Ecosse 205 Challenge.  Tied with them going into the final stage were the father and son crew of Donald & Scott Peacock in a similar car but they retired on the final stage.