Granite City’s Clash of the Titans 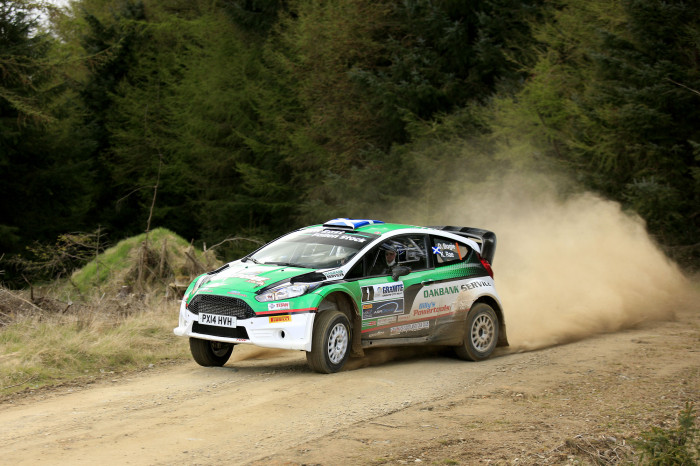 Battle was well and truly joined on the 3rd round of the ARR Craib Scottish Rally Championship, the Coltel Granite City Rally.  A dry but cold day began at 8:30am on Saturday 2nd May with two short 0.5 mile blasts round the car parks of the Aberdeen Exhibition & Conference Centre before the 101 crews headed south for 6 forest tests.

First round winners Jock Armstrong & Paula Swinscoe took an early 1 second lead into the first forest stage to the East of Stonehaven, but thereafter battle raged between the Impreza WRC of the non-registered crew of Dave Weston Jnr & reigning Scottish Champion Paul Beaton and 5 times Scottish Champions David Bogie & Kevin Rae in their Fiesta R5+.  Tied at first service, the Fiesta crew had eked out a slim 4 second advantage going into the final stage in Fetteresso, which at almost 10.6 miles was also the longest of the day.  Here, Weston Jnr & Beaton stopped the clocks 4 seconds up on their rivals and, thanks to being 1 second quicker over the 2nd spectator-friendly special in the morning, took the narrowest of victories on a tiebreak, Dave winning his local event 4 years after his father took his second victory.

Bogie & Rae at least had the consolation of taking their 2nd successive maximum points score in the championship ahead of early leaders Jock Armstrong & Paula Swinscoe who survived a half-spin in SS4 to take 3rd overall and 2nd SRC finishers.  Mike Faulkner & Peter Foy bounced back from their retirement on round 2 to finish in 4th in their Evo 9, frustrated to lose some time to their perennial rivals in the middle of the day but pleased to fight back from 8th after SS5 to get their championship back on track with yet another 3rd SRC placing.

Snow and rain in the preceding week had left the stages very slippery, and several of the lead runners fell off the road. Donnie Macdonald & Andrew Falconer came into the event 2nd in the championship and were in 4th place until they lost time with a spin on SS4. They recovered from 8th at first service to jump back up to 4th before sliding off the road into their first retirement of the season on the 6th stage.  A similar fate befell round 2 runners-up Andrew Gallacher & Jane Nicol who beached their AG Fiesta on SS5 and Quintin Milne & Stephen O’Hanlon who were lying 6th overall first time out in the ex-Dougal Brown Evo 9 until falling off the road in SS6.

Mark McCulloch & Michael Hendry had been battling for a top 5 placing until the gearbox broke on their Evo 9 on the final stage, all of which left Steven Clark & Phil Sandham to take 5th overall in their older Evo 5 ahead of Bruce McCombie & Michael Coutts, a result which keeps them in the lead of the championship despite never being quite on the pace all day.  Shaun Sinclair & Chris Hamill were trying a different tyre compound on their Evo 8 and it seemed to be working early on as they were in 5th place overall after first service.  However, they endured a frustrating day thereafter, slipping back to finish 7th overall, another solid top 10 result nevertheless moving them up to equal 2nd in the championship.

With his usual Evo 9 en route to Barbados, Barry Groundwater and Neil Shanks were in the borrowed Evo 10 of preparation expert Wayne Sisson.  After another consistent run in the unfamiliar machine they finished 8th overall, their 7th SRC placing enough to move Barry up to equal 2nd overall in the championship.  After a steady start on his first event since last year’s Speyside Stages, Andy Horne & Jim Howie picked up their pace to bring their Focus WRC car back in 9th overall ahead of the Group N winning Evo 9 of Fraser Wilson & Craig Wallace.

11th overall and 10th SRC points scorers were Banchory’s Martin Scott and Elgin’s Daniel Forsyth in an Evo 5, an excellent result from a starting position of 30th on a rare outing for the local driver.

Enjoying their best overall result since the middle of last year, Steve Bannister & Kevin Rae were 11th points scorers and first 2 wheel drive finishers in 12th place after a faultless day in the historic-specification Mk2 Escort.

The 1600 Nova of Scott Macbeth & Callum Atkinson took their 2nd consecutive class 4 victory in 20th place overall, a particular highlight of their giant-killing performance being an equal 12th quickest time over the final stage.

Having replaced the 1600 engine in their Mk2 Escort with a 2-litre since round 2, Greg & Chris McKnight recorded their first finish of the season to win class 8 despite struggling with brake calliper problems, 23rd overall and one place ahead of the bigger engined example of class 9 winners Keith Robathan & Calum Mackenzie, the driver really enjoying his local event on a rare forest outing.

Donald & Scott Peacock bounced back from the disappointment of their final stage retirement on round 2 to take class 3 and Ecosse 205 Challenge honours in their re-engined Peugeot 205 while Caroline Carslaw and co-driver John Duke took maximum points in class 7 in their Fiesta ST after the final stage retirement of current championship leaders Ross Macdonald & Matthew Johnstone.

Despite removing much of the front of the wee car, Thomas Gray & Ewan Jappy took their 2nd class 2 win of the season in the Toyota Yaris and, first time out in the woods as a driver Sue Hynd and hubby Tom just about maintained married bliss and won class 1 in their Peugeot 106, Sue deciding at some point in the final stage that she was actually quite enjoying this forest rallying.