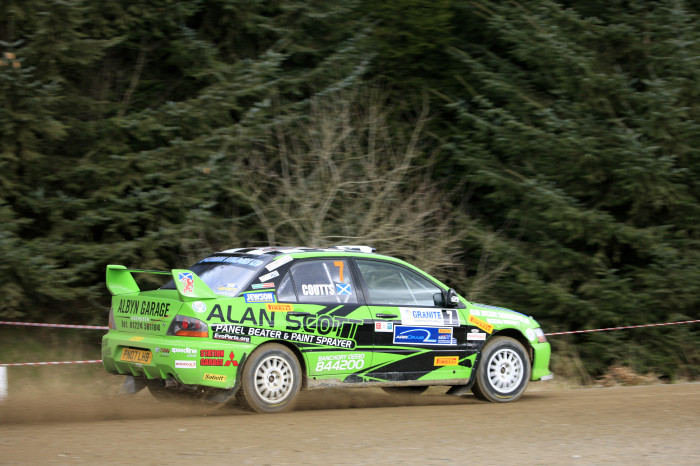 The Jim Clark Rally will return to the woods for the first time in 15 years as competitors in this Sunday’s Reivers rally head over the Border to tackle 5 stages in the massive Kielder forest complex.

In what the organisers hope is a one-off venture before returning to the closed public roads of the Scottish Borders, the event has gone back to its forest roots.

David Bogie & Kevin Rae will lead around 80 crews away from the Kelso Showground start from 9am on Sunday in their Fiesta R5+.  The 5 times Scottish Champions will start as the favourites to make it 3 consecutive maximum points scores since their retirement on the first round in February.  However, perennial Championship front-runners Jock Armstrong/Paula Swinscoe and Mike Faulkner/Peter Foy will be looking to be in a position to capitalise should the Fiesta crew slip up in any way.  The infamously fast Keilder roads have suited the Faulkner/Foy Mitsubishi Evo 9 in the past in their regular battles with the Impreza of round 1 winners Armstrong & Swinscoe but there is usually very little to choose between the two crews.

Although not registered in the championship the Fiesta S2400 of Peter Taylor/Andrew Roughead and the Peter Stephenson/Ian Windress Focus WRC will provide stern opposition on stages both crews will know well.

A 6th place finish on their local event means that Banchory’s Bruce McCombie and Torphins’ Michael Coutts come into the halfway point of the season leading the championship in their Evo 9 after 3 strong results.  However, with dropped scores coming into play later in the year maintaining their lead might be hard to achieve.

The Fiesta-bodied Evo of Andrew Gallacher & Jane Nicol will be hoping to bounce back after retiring on round 3.  Their 2nd place SRC finish on the Border showed their pace and assuming they survive the Severn Valley stages this Saturday they should be well in the groove from the off.

Mark McCulloch & Michael Hendry had an impressive start to their season derailed somewhat when the gearbox expired on the Granite.  They too will be hoping to get back on track and close the gap to the leading crews as the new-for-2015 pairing continue to get to grips with the ex-Dougal Brown Evo 9.

Fellow Yorkshiremen Matthew Robinson and Steve Bannister round out the top 10 but there will be no battle for top 2 wheel drive honours this time around as Matthew wheels out his S2000 Fiesta.  However, Irishman Seamus O’Connell will provide Steve and co-driver Louise Rae with a stern test in their historic Mk2 Escort.

In addition to battling for top 2 wheel drive honours though, Steve and Louise will be looking to record their 3rd SRC class 6 win of the season and thus leapfrog current class leader Willie Stuart whose BDA-engined Mk1 posted its first retirement of the year when the engine expired on the way to the start line on the Granite.

In the Group N category for showroom-specification cars, battle will be rejoined between current championship leaders Fraser Wilson & Craig Wallace and the similar Evo 9’s of John Morrison/Peter Carstairs and John McClory/David Hood.

After 3 finishes, the BMW 130i of Donald & Rachel Brooker currently leads class 9 and with the BMW 316i of closest rivals and current class 9 champions Robert Harkness/Mike Curry missing from the entry list they will be looking to consolidate their position at the halfway point of the season.  Following yet another non-finish on round 3, the Escort of Gordon Murray/Dave O’Brien will be hoping to take the fight to the BMW as they did on the Border.

Despite brake problems which hindered the debut of the new 2-litre engine in the Escort of current SRC Junior champion Greg & Chris McKnight on round 3, the crew secured top honours to jointly lead class 8, while Grant Inglis & Robert Gray will be hoping for better luck than they have enjoyed so far in 2015 with 2 successive non-finishes.

Ross Macdonald & Matthew Johnstone’s perfect start to the season came to an end on round 3 when they retired their Honda Civic from the class 7 lead with mechanical problems on the final stage.  This left the Fiesta of junior Caroline Carslaw and co-driver John Duke to take the class victory and close the gap to just 5 points.

The Corsa of Alex Curran & Heather Grisedale currently leads class 4 after three 2nd place finishes ahead of Colin Grant’s Mk2 Escort, but Scott MacBeth and co-driver Callum Atkinson head to Kelso as the crew to beat in their Nova after 2 successive class wins following their non-finish on the Snowman.  Meanwhile, the Citroen C2 of Jim Robertson & Colin Maxwell will be hoping for better fortune than they had on the Granite when a piston disintegrated halfway through the day.

Simon Hay & Calum Jaffray make the long trip south from Aberdeen to defend their class 3 lead in their Peugeot 205, their closest competitors likely to be the similar Ecosse 205 Challenge specification car of Andy Chalmers and Martin MacCabe who were unlucky not to take their first ever class victory on the Border back in March.

Making an even longer trip south Class 2 leader Thomas Gray also currently leads the Junior driver standings in his first season in the woods in his Toyota Yaris.  The battle for top SRC Junior honours will have an added edge on the Reivers as the winner on the event will receive a FREE entry to Wales Rally GB in November made available to the rally organisers through the ‘Road to Wales’ scheme run by Britain’s World Rally Championship round.

With one win apiece, Junior 1000 graduate Andy Struthers and co-driver Peter Weall will do battle once again with the Peugeot 106 of Sue & Tom Hynd for top class 1 honours after the former lost the victory on the Granite when their Citroen C2 slid off the road on the final stage.

Full entry list and event details can be found at www.jimclarkrally.org.