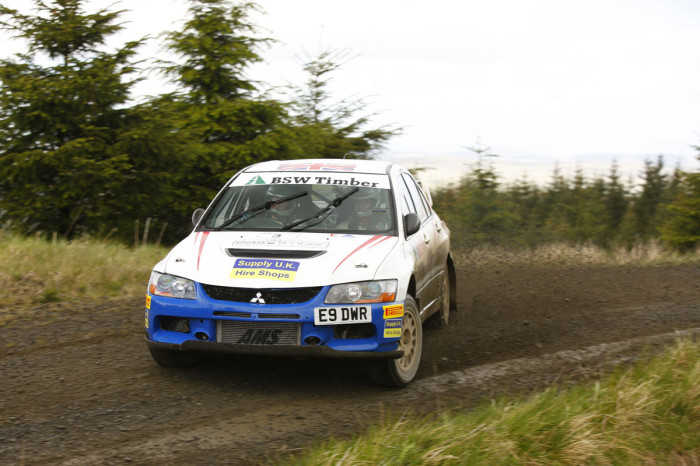 The second half of the 2015 ARR Craib Scottish Rally Championship campaign kicks off this weekend when crews return to Dumfries for the 15th year for what will be the 70th running of the RSAC Scottish Rally.

Local driver David Bogie and Jedburgh’s Kevin Rae will lead the field of around 80 cars away from the Whitesands start this Saturday from 8 am before tackling classic stages in the Ae, Twiglees and Castle O’er forests plus a spectator special short blast through the Heathhall stage and a brand new stage west of the M74 to the north west of Beattock.

Last year, the 5 times Scottish champions took their 3rd win on the event on their debut in the Ford Fiesta R5+. So far this year it has been a season of extremes, 2 wins sandwiched by 2 retirements on the first 4 rounds of the championship. With an engine rebuild after the last round though they will be favourites to take a 2nd consecutive win on the event, but another non-finish could well put paid to their championship challenge for this year.

Banchory and Torphins crew Bruce McCombie & Michael Coutts currently enjoy what looks like a healthy 20 point lead in the championship in their Mitsubishi Lancer Evo 9 at the halfway point of the season, following 4 top five finishes. However, with dropped scores counting later in the season the chasing pack have plenty of opportunities to close that gap.

Round 1 winners Jock Armstrong from Castle Douglas and co-driver Paula Swinscoe from Withnell are currently lying 2nd overall, Jock looking to win the event for the second time after his success in 2011. Only 2 points behind the Impreza crew, Kirtlebridge resident Mike Faulkner and co-driver Peter Foy from Bingley moved up to 3rd overall after winning the last round in Kielder 4 weeks ago in their Mitsubishi Evo 9. Both crews have posted one retirement in the first half of the year so a good result this weekend will strengthen their hand as the battle for championship honours intensifies.

No less than 3 drivers are currently tied for 4th place, all driving the popular Evo 9. Both Stonehaven’s Barry Groundwater and Shaun Sinclair from Oban missed the last round where Newton Stewart’s Mark McCulloch enjoyed his best result of the season after a non-finish on the previous round.

Other crews likely to be in the hunt for a top 5 placing include Donnie Macdonald and Andrew Falconer from Inverness, Gretna’s Steven Clark and Aberdeen’s Chris Collie and Mark Fisher from Workington, whose miserable run of non-finishes must surely come to an end soon.

After several years of competing in a Lancer Evo 5, Rory Young from Dumfries and Brampton’s Allan Cathers turned up at the last round in a Dom Buckley Ford Fiesta R5 and proved to be quick learners as they posted a 4th place finish in the SRC. An improvement on that result on Rory’s home event would not be a surprise.

Among the non-registered competitors are several crews who are making the trip from Ireland, led by the Skoda Fabia S2000 of Desi Henry and Liam Moynihan and another Ford Fiesta R5+ in the hands of Pauric Duffy and John Higgins.

Port William’s Fraser Wilson and Kirriemuir’s Craig Wallace currently lead the GpN category for showroom specification cars in their Evo 9 and will have the similar car of rivals John Morrison from Conon Bridge and Peter Carstairs from St. Andrews starting right behind them.

Legendary Yorkshire Escort driver Steve Bannister and Jedburgh’s Louise Rae will be aiming for their 4th consecutive maximum points score of the season in their historic Mk2. However, local son and father crew Greg & Chris McKnight, having recently fitted a 2-litre engine to their own Mk2, will be looking to close the gap to the front runners and consolidate their lead in class 8 on stages they know well.

Newton Stewart’s Alex Curran and Heather Grisedale from Workington have had an excellent season so far in their 1600 Corsa, taking their first class win on round 4 and currently lying 2nd overall in the 2 wheel drive category. Class rival Scott Macbeth’s Nova has proved fast – winning the class on rounds 2 and 3 but fragile – retiring on rounds 1 and 4 – thus far but the Rosemarkie driver, winner of the 2014 Colin McRae flat out award, will be flat out from the word go as he looks to close the gap over the 2nd half of the season.

Current class 9 Scottish champions, Robert Harkness from Stewarton and Lockerbie’s Mike Curry, got their 2015 campaign off to the perfect start with a class victory on round 1, but a retirement on round 2 and missing round 4 sees them down in equal 2nd in their BMW 316i behind the 1-series of Donald and Rachel Brooker and equal with round 4 winners Gordon Murray and Dave O-Brien’s Escort.

The 2-litre Honda Civic of Inverness crew Ross Macdonald and Matthew Johnstone currently lead class 7 ahead of the Ford Fiesta of Dunlops’ Caroline Carslaw and John Duke, and are currently lying in 4th place in the 2 wheel drive category.

Aberdeens’ Simon Hay and Calum Jaffray hold a healthy lead in class 3 in their Peugeot 205 having finished all 4 events so far, but Bridge of Dee’s father and son crew Donald and Scott Peacock will be keen to take their 2nd class win of the year on home soil. Meanwhile, Turriff’s Andrew Chalmers will be hoping for a change of fortune after 2 successive non-finishes.

Finishing round 4 as the top SRC-registered Junior won Muir of Ord’s Thomas Gray an entry into the National section of Wales Rally GB in his class 2 leading Toyota Yaris. A similar prize is on offer this weekend.

Finally, the class 1 battle will once again be between the Peugeot 106 of wife and husband crew of Sue & Tom Hynd – winners of the class on the last 2 rounds – and F1000 graduate Andy Struthers’ very standard Citroen C2.

Full entry list and spectator information can be found at www.scottishrally.co.uk