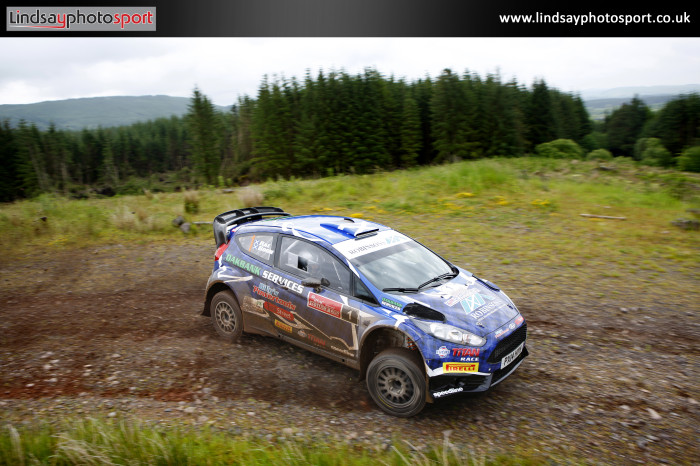 This weekend’s McDonald & Munro Speyside Stages is the penultimate round of this year’s ARR Craib Scottish Rally Championship and, with the best 6 scores now counting over only 7 events instead of the anticipated 8, the additional variable of dropped scores starts to come into play. Of the current top 5 crews, only Championship leaders Bruce McCombie & Michael Coutts have scored on all 5 rounds.

6 time winners of the event, David Bogie & Kevin Rae will lead the field of almost 100 cars away from the ceremonial start before a return to the unique challenge of Cooper Park in the heart of the event’s Elgin base, after the completion of flood prevention work. Although now slightly shorter the perimeter road now includes a jump. With 2 non-finishes already this year, the 5 times Scottish Champions may now be outsiders to add to their tally but they remain the crew to beat after a dominant win on the recent RSAC Scottish Rally in their Fiesta R5+. And another maximum score, which would be their 4th of the year, would keep the pressure on those ahead going into the final round.

With one dropped score apiece, perennial championship frontrunners Jock Armstrong/Paula Swinscoe and Mike Faulkner/Peter Foy currently lie 2nd and 3rd in the championship standings separated by 5 points after Jock & Paula were 2nd on the previous round with Mike & Peter recovering from a first stage puncture to finish in 5th place.

Although rather disappointed with his pace for much of the year, a consistent run of results has kept Shaun Sinclair in contention. Currently lying in 4th place, the gap to those ahead may just be too big to bridge over the final 2 rounds.

In the Group N category for showroom-specification cars, John Morrison & Peter Carstairs only have to finish on the final 2 rounds to claim the title after long-time leaders Fraser Wilson & Craig Wallace slid off the road into retirement on the previous round, their second non-finish of the season. Joining them for their first event in a recently-acquired Mitsubishi Lancer Evo 9 is former top 1600 2 wheel drive runners Alasdair Graham & Laura Stuart who will be looking to gain some experience of 4-wheel drive rallying.

Making the long trip north from Yorkshire, Steve Bannister will be looking to consolidate his and co-driver Louise Rae’s lead in the 2 Wheel drive category having taken top points on 3 of the last 4 rounds in their historic-specification Mk2 Escort. The Corsa of Newton Stewart’s Alex Curran and co-driver Heather Grisedale from Barrow-in-Furness are their closest rivals having scored points on all 5 rounds so far. After 2 non-finishes at the start of the season, Greg & Chris McKnight’s fortunes changed when they fitted a 2-litre engine in their Mk2 Escort, and with a category win on their home event last time out they will be looking to take the fight to the current leaders once again in Elgin. Crossing the start line in Cooper Park will be enough to give the son and father crew the class 8 title. Swapping their Evo 9 for a first time outing in a new Ford Escort, Dougal Brown & Lewis Rochford will be reacquainting themselves with 2 wheel drive.

The BMW 316i of Robert Harkness & Mike Curry took their 2nd class 9 win of the year on the Scottish, but with 2 non-scores they have it all to do to win the title as they are still 7 points behind the 130i model of Donald & Rachel Brooker.

Ross Macdonald & Matthew Johnstone have won class 7 3 times this season in their 2-litre Honda Civic, but 2 retirements sees them only 2nd in the class, 3 points behind the Fiesta of Caroline Carslaw & John Duke who won a free entry into the National Rally on Wales Rally GB as top Junior finisher on the Scottish. It’s still all to play for over the final 2 rounds.

At this stage of the season, several of the class titles have already been decided. Local driver Thomas Gray has sewn up class 2 in his Toyota Yaris. In his first season of rallying Thomas has also won a free entry into the National rally at Wales Rally GB in November as the leading Junior driver on the Reivers. Alex Curran & Heather Grisedale’s 2nd class victory on the Scottish was enough to give them the class 4 title while the Peugeot 205 of Simon Hay and Callum Jaffray also have built up an unassailable lead in class 3, although there is still all to play for in the battle for the 2015 Ecosse 205 Challenge title.

Finally, Andy Struthers & Pete Weall took their Citroen C2 to a 2nd class 1 win of the season on the Scottish to open up a 12 point gap over the Peugeot 106 of Sue & Tom Hynd, who slid off the road to their first retirement after 2 successive class wins.

The event starts at 9:00am this Saturday, 1st August with 2 stages in Cooper Park preceding 7 forest tests to the East and South East of Elgin, with the first cars scheduled to return to the finish at Moray College from around 4:15pm.

A full entry list and spectator information can be found at www.speyside-stages.co.uk