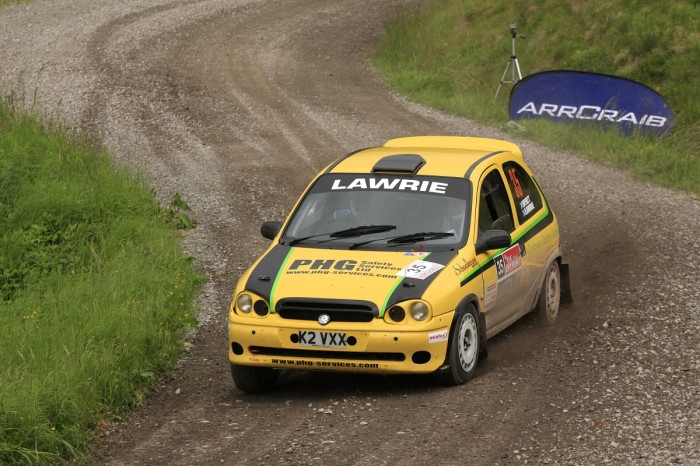 Scottish Championship regular Angus Lawrie, seen last year driving a Vauxhall Corsa after upgrading from his Nova has a new figure sitting alongside him for the Snowman Rally and potentially the whole season. It can always be difficult for a new crew to gel together at first, but it’s even more difficult when your co-driver is from a completely different country!

Jeannette Kvick from Denmark is the lady who will be partnering Castle Douglas’ Angus Lawrie, but despite the obvious language barrier, Angus is delighted that the partnership has come together.

“I’m lucky to have such experience with me for the Snowman rally and hope to give her a good experience for her first event in Scotland!” He said.

“The language barrier may be a problem but I have been reassured it will be ok. I am currently giving Jeannette some ‘Scottish’ lessons for her trip to Inverness! It will be a learning curve for Jeannette with the different ways events here are run compared to Denmark but I have every confidence Jeannette will be great!”

Angus was left without a co-driver after the 2015 season, so he was in the search for one in the off-season. He is “happy and relieved” to have got the deal in place.

He said: “Jeannette had messaged me looking for a seat over in the UK and a friend had put her in my direction. It’s not the R5 seat she may have been looking for but after much talk about my aims and I suppose previous results were enough for her to decide to come and navigate [for me].”

As well as the change in the passenger seat, the car has been tweaked too.

“The car went through a lot of development in the 2015 season. Hopefully now with the results from the past 2 events I have competed in, the car is getting to where I would like it!”

As for the 2016 championship and the first round in Inverness, his aims are pretty clear but not so straightforward.

“The aim for the Snowman is a finish. I’m yet to finish the event for different reasons. In 2016 the biggest aims are the 1400cc class victory and a good position in the 2wd Championship. I’m hoping we can do some giant killing with the wee 1400!”

Lawrie and his new co-driver Jeannette Kvick get their season underway on the 20th of February on the Snowman Rally.