More of the same for McCombie in 2016 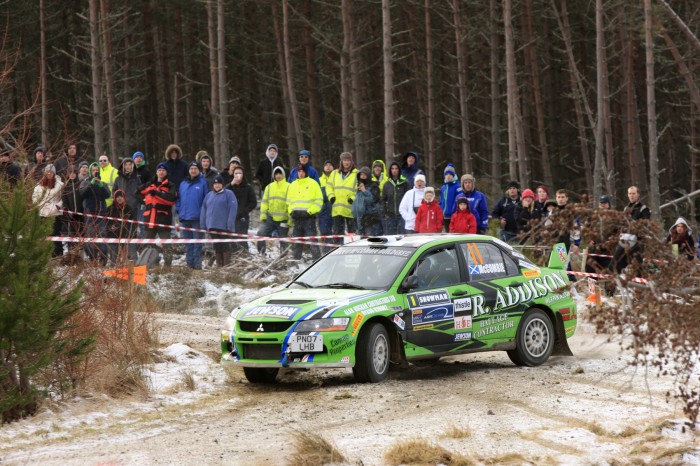 Bruce McCombie and Michael Coutts were arguably the surprise package of the 2015 Scottish Rally Championship season. The Banchory driver led the championship for much of the season due to his remarkable consistency, only just being pipped to the post by Jock Armstrong. It was a situation that gave McCombie “a boost”, and he is eager to be back in the hunt in 2016.

He said: “We are aiming to be in title fight, and yes it gave us a boost last year being in the title fight with so much support from local enthusiasts and businesses, but you never know what upgrades and new cars our competitors have got. If we can find a wee bit more speed from our driving and note reading and still keep the reliability we had last year, we will be happy.”

“The car has had a full strip down and check over. A fair bit of TLC was required after the punishment it got last year, but there have been no major changes.”

Last year Bruce’s main title rivals were eventual champion Jock Armstrong and Mike Faulkner in a similar Mitsubishi Lancer Evo IX. McCombie expects the same men to be fighting at the front in 2016.

“I expect Jock and Mike to be the boys everyone will be chasing assuming [David] Bogie stays away from SRC.”

“Donnie is quick but had no luck last year with reliability so if he can get reliability he will be up at the sharp end. Shaun Sinclair with his WRC Subaru could be worth watching and Andrew Gallagher won’t be far away.”

“Mark McCulloch with his new evo 9 will be the dark horse and Barry Groundwater is always Mr Consistent.”

Round 1 of the 2016 SRC, the Snowman Rally is an event McCombie has plenty of experience of having first competed on it last century. He finished a fine second last year, and would like to go one better this year.

“It would be good to win Snowman Rally, but the weather and the likes of Jock and Mike might hamper that aim!”

“I entered my first Snowman Rally back in 1997, and over the years you learn that it’s a complete lottery! Road position can make the difference but that all depends on ice, snow. If it stays mild and wet as it has been this year you would expect a muddy rally, making road position not as valuable.”

“To succeed at the Snowman, you need good speed and plenty of luck!”

The 2016 Scottish Rally Championship season kicks off on the 20th of February.