Class Winners from the 2016 Snowman Rally 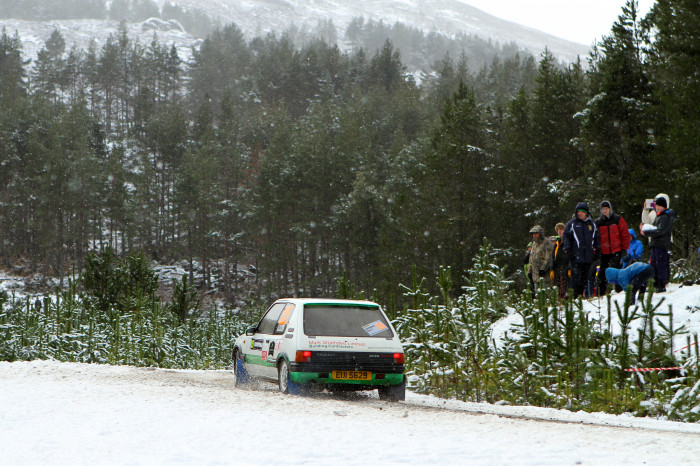 The 2016 Arnold Clark Jury’s Inn Snowman Rally will go down as one of the most difficult and unpredictable rallies in ARR Craib MSA Scottish Rally Championship history. The drivers that came out on top of their classes did a great job to keep it all together in conditions that varied from smooth, flowing gravel to slippery ice and snow in an instant.

Winners of Class 2, finishing in 39th overall were Angus Lawrie and his new Danish co-driver Jeanette Kvick in their Vauxhall Corsa. The Castle Douglas driver dominated the class, beating his nearest rival Craig Martin in a Skoda Felicia by over 3 minutes. Stephen Fraser came third in his Mini.

Class 3 was won by former SRC front runner Chris Collie from Aberdeen in a borrowed Peugeot 205. Collie, who has campaigned Subaru’s and Mitsubishi’s in years gone by won the class comfortably from the Vauxhall Nova of local driver Scott MacDonald, with Donald Peacock taking third in his Peugeot 205.

Coming out on top of Class 4 were local crew Ian Cattanach and Lisa Watson in their Talbot Sunbeam, finishing 53rd overall on a day where conditions were against the rear wheel drive car. Graeme Macvicar came second in class in his Ford Fiesta, with Andy Struthers claiming third in his Citroen C2.

Glenshiel’s Paddy and Chris Munro took Class 5 honours in their Mk2 Ford Escort by just over a minute from John O’Kane in his Mk2 Escort. Scott McQueen took third in class by just nine seconds from Andy Chalmers in his Peugeot 205.

The winners of the Class 6 were Brechin father & son Ian and Sandy Milne in their works replica Escort Mk2, finishing 76th overall out of 94 finishers and taking the Historic Class win.

Class 7 however was much more closely contested. Taking the win was another local driver Ruaraidh Stubbs in his Ford Fiesta, but by a slender nine seconds from Scott Burness in his Ford Fiesta ST. Only a further four seconds back were debutant Kevin Gray and Daniel Christie in their Vauxhall Astra. On a day where other classes were won by big margins this was a very close battle.

Class 8 was taken by Glasgow’s Grant Inglis and Robert Gray in their Ford Escort Mk2, with Dougal Brown came in just two places further back overall to take second in class in his similar Escort Mk2, while Sandy MacKenzie took third in class with his more unusual Opel Manta.

Class 9 winners were Inverness crew Kevin Ronaldson and David Falconer in their unique rear wheel drive MG Metro 6R4, who took a comfortable class victory ahead of another unusual car, the BMW 130i of father & daughter Donald and Rachel Brooker.

Classes 11 & 12 dominated the overall results, with the top 3 in each class finishing inside the top 10 overall, while other fancied runners Jock Armstrong and Mike Faulkner suffered from running at the front of the field in the deep snow and from poor tyre choices.

With Duns pairing Garry Pearson and Robbie Mitchell taking the Class 13 spoils in their Ford Fiesta R5, it was a more difficult day for the similar car of John MacCrone and Rhianon Gelsomino in their R5 Fiesta. MacCrone struggled in an unfamiliar car and from a lack of suitable tyres for the conditions. Third in class was the Hyundai Accent WRC of John Rintoul and Ross Hynd, who weren’t relishing the wintery conditions.

The Snowman saw the return of the SRC Challengers Championship. This was a hotly contested series in the past, and has been won by some of the biggest names in Scottish rallying over the years as they made their way up the rankings. This series is open to drivers who haven’t finished in the top 10 on a British event in the last 10 years, and was won by Banchory’s Scott McCombie with Workington co-driver Mark Fisher in their Evo IX. Scott took tenth overall in the process. John Wink and John Forrest finished second in class and twelfth overall, just 20 seconds off McCombie with Ross MacDonald and Matthew Johnstone taking third in a Challengers championship podium dominated by Mitsubishi Evo’s. Ross took the fifth fastest stage time on stage 2 on the way to seventeenth overall.

And finally, the www.usedcarparts.co.uk SRC Subaru Cup for classic Subaru Impreza’s was won by Elgin crew Scott Mutch & Greg McDonald, finishing an impressive 20th overall on their first Snowman rally. Garve driver Drew MacDonald and Susan Shanks, took a fine 35th overall, seven seconds ahead of John Rintoul’s WRC Hyundai on their way to second of the Subaru’s, with their main (friendly) rivals Matthew Thomson and Ian Graham in third.

The 2016 ARR Craib MSA Scottish Rally Championship resumes on March 19 for round 2, the Brick & Steel Border Counties Rally in Jedburgh.