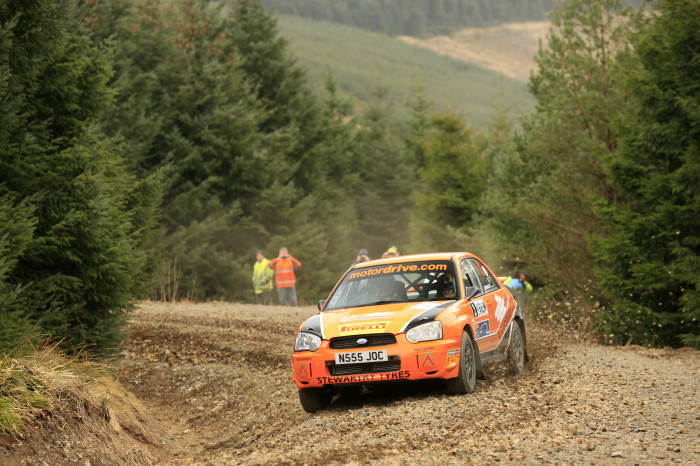 For round 2 of the 2016 ARR Craib Scottish Rally Championship, the series heads to Jedburgh and the Scottish Borders for the Brick & Steel Border Counties Rally. None of the event’s previous winners are contesting the 2016 edition, meaning we will see a new winner come Saturday afternoon.

2015 Champion Jock Armstrong heads to the Borders in confident mood to win an event that has thus far eluded him. In his title winning season, the Border Counties was the only rally he didn’t finish.

He said: “The Snowman went fine. I had a lot of fun and I like driving first car on the road as someone has to do it.”

“The Borders has been my worst event every year. The stages were new last year, they’re normally quite fast and flowing, which I like apart from the chicanes! I am capable of winning it, but would never say so until I have!”

Mike Faulkner was another who suffered a disappointing Snowman Rally, not revelling in tricky conditions that sapped away all of his confidence.

The Border Counties hasn’t been the kindest to him in recent years, but he’ll be hoping to put that right with a strong result to kick start his 2016 title campaign.

Donnie MacDonald finds himself as the championship leader for the first time in his SRC career, after winning his home event, the Snowman Rally, in February. Even if he doesn’t win another Scottish championship round, he insists that “this was the one for me.”

Despite the increased confidence a win may bring, MacDonald is not getting carried away and is retaining his aim of a top three on each event and in the championship.

John MacCrone and Rhiannon Gelsomino had a troubled start to their season, as they adapted to their Ford Fiesta R5 on tyres not ideal for the treacherous conditions that faced the crews in Inverness.

However, the R5 Fiesta is one of the quickest rally cars around, and with fast and flowing stages that aren’t forecast to be covered in snow, the Border Counties could be where the Mull driver gets his season properly up and running.

Bruce McCombie was left ruing what could have been after the Snowman Rally, as a costly mistake on stage 3 took him out of contention for the win that he was fighting for and put him towards the bottom of the top 10.

Last season the Banchory based driver’s strongest asset was consistency, and he will be aiming to maintain that this year as he led the championship through much of the season because of it. McCombie finished fourth in the SRC and sixth overall last year, so could be a dark horse for a podium finish.

Dale Robertson made a huge impression on his return to the SRC after a sabbatical in 2015. Remarkably he and Stuart Loudon came just seven seconds away from a maiden Scottish championship win.

He said: “We hope was can finish in the top 5 at all events. We have to remember we are in a Group N car with a Group A turbo so it has to be driven on the door handles to keep up with the top lads!”

“The stages are really nice with big ditches but we hope for some snow again to even it up against cars with more power. We will be trying hard.”

Mark McCulloch was one of the starts of the opening round of the SRC, leading the rally by just over 50 seconds after four of the five special stages. However, a puncture cruelly denied him of his maiden SRC victory but he still achieved a best result of fourth.

“We are hoping to have a strong season this year and the Snowman was almost the perfect start for us.” He said.

“We are realistic however and I imagine the time sheets will very different on the Border Counties thank on the Snowman. [We are] looking for a clean run and hoping to be pushing for a top 5 result.

“All the stages on this event are quite new to me, we have only competed on them last year for the first time and found them to be very enjoyable.  Quite narrow and tricky in places but looking forward to getting back into them this year.”

Shaun Sinclair made his SRC debut in his recently acquired Subaru Impreza WRC S9 on the Snowman. However, he was out as early as stage 2 with a problem with his engine.

Sinclair however has good form on the Border Counties, scoring maximum SRC points back in 2010 in an Evo IX. Sinclair is certainly one to watch out for, especially since he has not nominated a car to be compete on the Border Counties! It will be interesting to see what he shows up in in Jedburgh.

Duns driver Garry Pearson got his season off to a strong start on the Snowman, with a fastest time on just his second stage with his new car on the way to fifth overall, as he continues to acclimatise to the Ford Fiesta R5 and four wheel drive machinery. However, he is realistic ahead of round 2 of the championship.

“Our aim has to be to gain valuable miles to build on with four wheel drive on a loose surface.” He said.  “The Snowman conditions suited us for the first time out, but we need to keep our feet on the ground.

“Certainly the guys at the top are likely to be Jock Armstrong, Mike Faulkner, John MacCrone and Donnie MacDonald. If we can fit into this bracket it would be nice.”

Barry Groundwater and Neil Shanks got their season off to a steady start on the Snowman, managing to mostly stay out of trouble despite a “pish” stage 4.

The Mitsubishi Evo X crew will be looking to build upon a decent points finish from round 1, and to better their sixth place from last year’s Border Counties.

The Brick & Steel Border Counties Rally will be contested on 19th March. Coming soon is a preview looking at the various classes including the 2WDs and the SRC Challengers Cup.