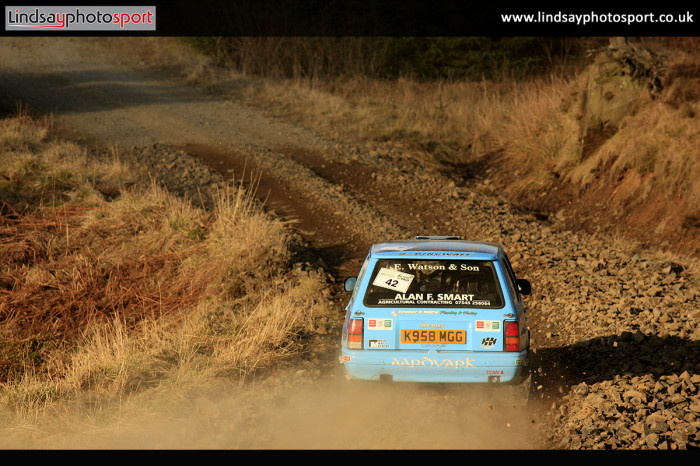 Round 2 of the 2016 ARR Craib Scottish Rally Championship, the Brick & Steel Border Counties Rally, has attracted a strong entry of over 90 cars across a large variety of classes. The field are in for a treat, as the Border Counties features beautiful fast and flowing stages in the picturesque Tweed Valley.

Outside of the battle for overall honours between competitors in the top 10, there is healthy competition up and down the field within the other categories and classes.The SRC Challengers Championship has returned for 2016 with Scott McCombie looking to add to his category victory on last month’s Snowman where he finished 10th overall. The Banchory driver will face stiff competition from a chasing pack of Northern drivers who all performed well on local stages – Huntly’s John Wink was breathing down his neck at the Snowman and will be looking to close the gap with his pace improving with every rally, while Ross MacDonald from Inverness put home advantage to good use to take third on the Snowman as he continues to acclimatise to 4WD.

All 3 drivers are in the popular Mitsubishi Lancer Evo IX so with equal machinery the battle is set to be close. Scott Mutch’s Subaru breaks the Evo domination, with the Elgin driver showing well in his first season and using his lower running position to good order in his Subaru, followed by another pack of Evo’s with Scott MacBeth next up in fifth.

Mutch also leads the standing in the new for 2016 www.usedcarparts.co.uk SRC Subaru Cup for the iconic Subaru Impreza. Offering closely controlled competition at sensible budgets this offers a tough challenge within the SRC with prizes on offer on each event, and good deals on tyres for registered competitors. Mutch will be challenged by Inverurie’s Matthew Thomson, Helmsdale’s Steven Fraser, and Aberdeenshire’s Geoff Goudie who will look to improve on the Snowman where he faced mechanical problems before the start.

The Scottish 2 Wheel Drive Championship battle started in less than ideal conditions on the Snowman, with many struggling in the wintry conditions on unsuitable tyres. Glasgow driver Grant Inglis coped with the conditions best in his Ford Escort Mk2 to pick up maximum points ahead of pre event favourite Dougal Brown. It was a difficult home event for the fellow Escort driver.

Ringford driver Angus Lawrie had a great Snowman, using the conditions to embarrass many higher powered cars in his 1400cc Class 2 Corsa as he enjoyed his first event with Danish co-driver Jeanette Kvick.

With some of the chasing pack opting to sit out the Snowman, and some of the expected front runners struggling in Inverness the outcome this weekend will be intriguing, particularly with drivers like multiple champion, the Yorkshire legend Steve Bannister returning to face young challenger Greg McKnight from Thornhill. The pair had some mighty scraps last year as Greg picked up the pace with each event to challenge a driver who he admits was his hero growing up!

The Group N Championship for Class 10 cars promises to be a great contest once again between Port William’s Fraser Wilson and John Morrison from Inverness, both in Mitsubishi Lancer Evolution IX’s. Both drivers struggled in the snow in Inverness, and will be looking to kick start their seasons in Jedburgh. Class winner from the Snowman Reay MacKay is missing from the Border Counties entry list, but Wilson and Morrison will be challenged by 2WD graduates Alasdair Graham from Paisley and Mull’s Craig Rutherford. The pair are former Junior stars in the Scottish series and are gradually getting used to their 4WD machinery, and will be keep to prove their pace.

Class 1 for Rally First spec cars will see a forest rally debut for Duns driver Gina Walker, daughter of the former World Ladies Rally Champion Lousie Aitken-Walker. Gina was recently awarded the RSAC Scholarship which is a welcome boost to her season, and will help make the transition from tarmac to gravel easier. With Mum watching and offering advice, it will be interesting to watch her progress throughout the year, with another talented driver looking to join the list of champion drivers from the Borders farming town.

Runaway class 2 winner from the Snowman Lawrie leads the way in the class in Jedburgh, with fellow Corsa driver Ross Carbry looking for a less eventful run on the Border Counties. His first event on gravel proved to be a baptism of fire when a roll followed an early off. Despite these challenges he did record a finish to pick up valuable points from a difficult day.

Donald Peacock, Luke McLaren, Douglas Cameron and Robbie Beattie will be out competing for Class 3 honours, all competing in the classic Peugeot 205 GTI with Castle Douglas driver Peacock leading both the class and the new for 2016 SRC 205 Cup tables.

The battle in Class 4 is one of the most interesting, with the field being led away by the Vauxhall Corsa of returning class champion Alex Curran who sat out the Snowman, while reigning SRC Junior Champion Thomas Gray will look for a change of luck after a poor home rally in his new Ford Fiesta R2. Jim Robertson and Murray Coulthard join the battle in their Citroen C2s. Current class leader is Andy Struthers in another C2, the Liberton youngster also leading the SRC Junior ranks after a good performance in Inverness.

Class 5 sees John McIlwraith join the SRC battle in his Ford Escort RS, and with neither of the top 2 in the standings after the Snowman making the journey to Jedburgh, Andy Chalmers has a chance to take the lead after finishing 3rd on the Snowman.With Bannister heading the class 6 entry for Historic spec cars, current class leader Ian Milne from Brechin will have his work cut out. The pair, in similar Ford Escorts as used in period by such famous names as Ari Vatenan and Roger Clark, will have the unusual Fiat 131 of Matthew Robinson for competition.

Reigning SRC Ladies Champion Caroline Carslaw heads the Class 7 field in her Fiesta, with the Glasgow driver happy to be back on the more familiar gravel after a successful trip to Wales Rally GB at the end of the 2015 season.

One of the highlights of the event will be the fight for Class 8, with McKnight, Brown & Inglis likely to be scrapping for valuable seconds right from the off. They will be looking to take the fight to Bannister in the 2WD Championship while fighting amongst themselves for the class honours. Keith Seager made a return to forest rallying in his BMW Compact on the Snowman and looks to continue to get back into the groove in Jedburgh. These spectacular rear wheel drive cars are joined by the bigger engined class 9 cousins, with Perth’s Gordon Murray looking to continue his good form from last year against the unique BMW 130i of father and daughter Donald & Rachel Brooker from Banchory.

The Brick & Steel Border Counties Rally based in Jedburgh bursts into life on March 19th.