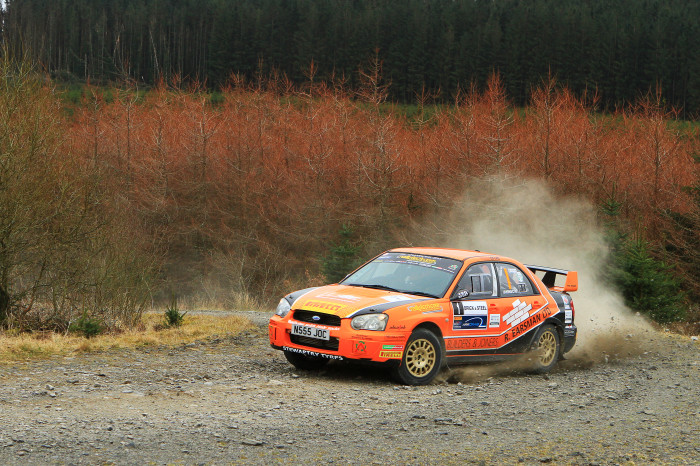 Run on forest stages in the Tweed Valley, the crews faced much more predictable conditions than they did in Inverness, with the stages being dry throughout. However, they were rough in places meaning punctures affected a large number of drivers, and as the afternoon progressed the sun did its best to restrict visibility.

Alasdair Graham illustrated how much the drivers enjoyed them, saying: “I don’t think I’ve ever driven a rally where every stage has been just perfect.”

Armstrong from Castle Douglas was quick to put his disappointing start to the season behind him, winning all three special stages before the service break in Newtown St Boswells.

On an event he had never won, he headed into service with an 11 second lead, but he didn’t win any of the final three stages of the rally, not helped by forgetting to put the car in gear off the line on SS4.

Nevertheless, he still went on to claim his first win of the 2016 season, but incredibly only due to his win on SS1 as a fast charging Garry Pearson ended the final stage with the same overall time as the Subaru!

Jock said: “A month ago was quite difficult but to come back with a win certainly pushes us on for the championship.

“It was very close today but that’s what it’s all about. That’s the way it should be!”

Garry Pearson and Robbie Mitchell claimed second overall in their Ford Fiesta R5, taking two stages wins and 17 seconds out of Jock Armstrong in stages 5 and 6 after a slow start to come perilously close to a maiden SRC win.

Despite “not being on his game” on the first stage, he was always in the top 3 on each stage, and won SS5 Elibank 2 by 8 seconds despite driving on a puncture for the final kilometre.

Garry said: “The last two stages were really good. We were slow off the mark on the first one but there are a lot of positives to take from the last two.

“Congratulations to Jock, and thanks to the Border Counties for a great event.”

Third place went to Shaun Sinclair and Kirsty Riddick in a Ford Focus WRC ’08. It was Sinclair’s first time in the car, which came around as his Subaru WRC is still not fixed after the Snowman rally.

Despite feeling he was braking too early into the corners, he was only 2 seconds off the pace in the first test, and just 11 from the lead at service.

He won SS4 by 3 seconds and looked like a serious threat for the overall win but in SS5 his car started to fill with dust, meaning he “couldn’t see a bloody thing!” He eventually came home just seven seconds from first place.

He said: “We were a bit cautious, but the car is awesome, with great power and great brakes. It was terrific for the first time in the car.”

Mike Faulkner and Peter Foy put the disappointment of the Snowman rally behind them on the Border Counties, with a very consistent run to fourth overall.

He was pretty much in a rally of his own, 30 seconds behind Sinclair’s Focus and 1 minute ahead of Mark McCulloch’s Evo IX come the finish in front of Jedburgh Abbey.

Mike said: “We drove the door handles off the car! We tried really hard, don’t think we could have gone any faster.

“I’m happy as I gave all that I could, so can’t ask for much more.”

Mark McCulloch and Michael Hendry suffered heart break on the Snowman rally as a final stage puncture denied them the chance to take their first SRC win at the final hour.

However another strong performance from McCulloch saw him take fifth overall, despite never being fully happy with his car’s handling which was too loose at the rear, and suffering “a disaster” on SS1 as he chose two incorrect tyres.

Mark said: “We struggled with the car all day, but we gave it everything. If we can get the car sorted we can hopefully go even quicker again [on the Speyside].”

Sixth overall went to Bruce McCombie and Michael Coutts, who enjoyed a relatively trouble free run on the way to a solid points scoring finish.

At the midday service break he was aiming for fifth, but a puncture in SS4 did not help his cause. Despite it feeling quick, he knew he had some task to beat the R5 and World Rally Car machinery with his Mitsubishi Lancer Evolution IX.

Seventh overall was, under the circumstances, a brilliant result for Dale Robertson and Stuart Loudon who claimed an emphatic second overall on round 1.

The pair were forced to run with just front wheel drive on their Evo IX for half of SS1 and all of SS2 and 3.

At service he said: “Terrible! The times aren’t too bad for 2WD but we should be higher. We’ll try to get into the top 10.”

Robertson achieved three top 7 stage times in the afternoon to put himself back into the top 10, and into a good position in the championship after just two rallies.

Donnie MacDonald and Paul Beaton lost seventh place on the final stage of the event to finish in eighth and in the process lose the championship lead.

MacDonald was one of many drivers to suffer a puncture throughout the day, collecting one near the start of the 8.34 mile Elibank 2 test. He opted to run the stage with the deflated tyre still on rather than stop in the middle of the stage and change the wheel.

Despite not achieving his aim of maintaining the championship lead, he still sits in a good position.

Barry Groundwater and Neil Shanks guided their Mitsubishi Lancer Evolution X to ninth overall, just 2 seconds behind MacDonald and Beaton at the finish.

The Stonehaven driver enjoyed himself through SS2 Cardrona, remarking that he “could’ve done with it being longer.”

The rest of the rally was devoid of drama for the pair, who once again took a consistent points scoring finish.

The top 10 was rounded out by Andrew Gallacher and Jane Nicol in their Mitsubishi Lancer Evolution VIII, on the event where they took second in the SRC last year.

However, his run to tenth wasn’t without trouble, as he had low battery voltage through SS2 Cardrona due to a cutting out alternator.

At the end of SS5 he said: “We caught some rocks near some logs and collected two punctures. Before the punctures the engine was cutting out as well.”

Despite these issues, he still finished just nine seconds behind Groundwater in ninth.

The only top seed who never made it to the end was John MacCrone in his Ford Fiesta R5.

At the midday service break he was sitting in fifth overall, and looking to increase his confidence, saying “it’s so important to know I can still be quick in the fast bits.”

However, the turbo clamp failed half way through SS4, resulting in a retirement. MacCrone needs a strong result on the Speyside Stages to kick start his championship.

The next round of the SRC is the McDonald & Munro Speyside Stages on 23 April.

Coming soon is a review looking at the separate classes, the SRC Challengers and the Subaru Cup.