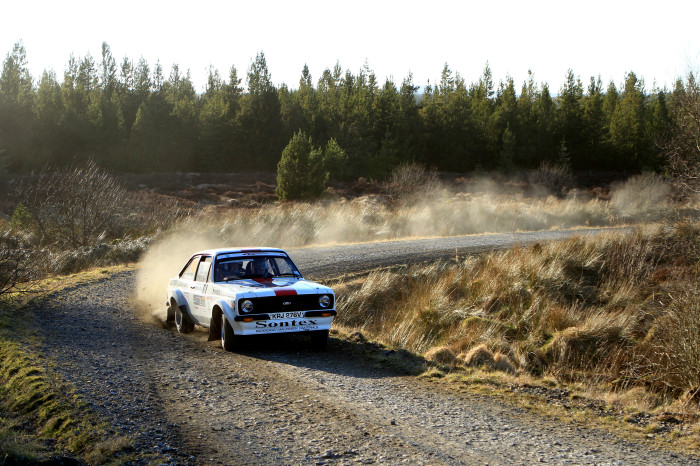 The 2016 Brick & Steel Border Counties Rally will be remembered for its titanic finish which saw the top 3 separated by just seven seconds and the top 2 tied for overall time, but there was in fact plenty more action going up and down the ARR Craib MSA Scottish Rally Championship field.

In Class 2, Castle Douglas driver Angus Lawrie and Danish co-driver Jeanette Kvick continued their impressive start to the season, taking their second consecutive class win in 2016 with their Corsa, finishing in 39th overall. Dumfries’ Niall Cowan Jnr with Thomas Bruce on the notes took second in class, 2 minutes behind Lawrie on their 2016 season debut, with their MG ZR.

Alford’s Scott Beattie won class 3 in his Talbot Sunbeam producing one of the drives of the day to finish a fine 26th overall, with the rear wheel drive Sunbeam coming out ahead of the 205 chasing pack. Dundee driver Robbie Beattie claimed his first SRC finish taking second in class ahead of Luke McLaren who claimed third in class for the second event in a row, moving into the Class lead in the process. Top of the points heading to Jedburgh were Donald and Scott Peacock, but the pair retired from third in class on SS5.

Top of the class 4 tree were Steven Smith and Daniel Johnstone in their Mk2 Ford Escort, recording a good finish after their promising pace on the Snowman ended in retirement in Inverness. Murray Coulthard and John Frew in their Citroen C2R2 opened their 2016 SRC campaign with second in the SRC class standings despite a small moment on SS3. Taking third, and moving into the class lead in the championship standings, Thomas Gray & David Law continued their learning curve in their Fiesta R2 despite intercom problems slowing their morning pace. This will be an intriguing battle to follow as the season progresses.

Class 5 honours went to John McIlwraith of Canonbie and Scott Young of Duns in their Ford Escort RS, another crew making their SRC season debut. They were also delighted to pick up the award for the best prepared car at Scrutineering. Ellon’s Andy Chalmers, co-driven by Martin MacCabe from Glasgow moves into pole position in the championship standings following his seond place finish in Jedburgh to go with third on the Snowman.

Class 6 and Historic victory went to the returning Steve Bannister with new co-driver Kim Grey, who was the highest classified Scottish 2WD Championship runner in 16th overall, something which left the Malton driver “really pleased.” Brechin’s Ian Milne followed up his unopposed class win on the Snowman with 2nd in the SRC standings on the Border to lead the class as we head to round 3.

2015 SRC Ladies Champion, Glasgow’s Caroline Carslaw takes over the Class 7 lead after taking maximum points on the Brick & Steel Border Counties. The Fiesta ST driver, co-driven by John Duke, had a much better day on the Borders gravel than the snow in the Highlands.

Class 8 saw a close finish at the end of the event, with Glasgow’s Grant Inglis edging out the returning 2015 2WD Champion Greg McKnight by 20 seconds, with both drivers in Ford Escort Mk2’s. The pace of the young Thornhill driver was one of the talking points of the event, with top 10 times on the first 2 stages seeing him sitting 8th overall ahead of his idol Bannister. Unfortunately, a stage 3 excursion blunted his challenge.

“It was a sudden hairpin left, and we went straight on backwards and into a ditch. We had to get help from the spectators. We lost over a minute.”

Inglis’ day wasn’t without its dramas, a lack of brakes for half the day made things “interesting”, but they battled on to make it a perfect start to the season – 2 class wins from 2 events. Finishing third in class were Kevin Seager and Mark Runciman in their unusual BMW Compact. The Glasgow crew were continuing their return to forest rallying after a 20 year lay off, and their pace improved with every mile.

One of the pre-event favourites Dougal Brown and Lewis Rochford failed to finish the event however, with mechanical problems in SS3.

Class 9 was won by Donald Brooker from Ballater and Rachel Brooker from Aberdeen in their BMW 130i, taking 50th in the overall classification. The pair were the only finishers in the class, as rivals Gordon Murray and David O’Brien retired on SS4, and are another crew with maximum points after 2 rounds.

Class 10 for Group N specification cars was won by Paisley’s Alasdair Graham and Laura Stuart in their Mitsubishi Lancer Evo 9. Alasdair certainly loved the stages in the Tweed Valley.

He said: “I don’t think I’ve ever done a rally where every stage has been just perfect!”

Second in class were Mull’s Craig Rutherford and Chris Hamill from Oban in their Subaru Impreza. The pair finished 1 minute 39 seconds behind Graham and Stuart, but just under 4 minutes ahead of third placed John Morrison and Peter Carstairs’ Mitsubishi. John lost 5-6 minutes on the first stage with an electrical problem, but it seemed to rectify itself soon after. He was back on the pace in the afternoon loop.

With the top 10 runners overall claiming the honours in classes 11, 12 & 13 their was a scare for the Hyundai Accent WRC of John Rintoul & Ross Hynd, who left the road on the final stage in spectacular fashion, landing well off the road upside down in a burn. Thankfully the crew were fine, if a little damp after their excursion.

The re-introduced SRC Challengers Championship, for drivers who have not finished in the top 10 of a national rally in the last 10 years was won by Huntly’s John Wink on the Border Counties, who enjoyed a drama free run after a stage 1 spin to take 11th overall in his Evo IX, co-driven by John Forrest. Challengers winners from the Snowman Scott McCombie and Mark Fisher took second in class, 20 seconds behind Wink and Forrest after a good battle all day. This sees the Mitsubishi pair tied at he head of the standings, with Ross MacDonald and Matthew Johnstone taking third to follow their similar result on the Snowman, despite being “half asleep” in the morning. With the top 3 drivers being separated by less than 30 seconds this category promises an exciting battle throughout the season.

The www.usedcarparts.co.uk Subaru Cup for the iconic Subaru Impreza, made famous by 1995 World Rally Champion Colin McRae, was won by Inverurie crew Matthew Thomson and Ian Graham, who came from behind to take a category win, and with a share of the Cup lead after 2 rounds. Shetlander Geoff Goudie was pleased to get his Cup challenge under way in Jedburgh after mechanical gremlins struck before the Snowman forcing a non start. A solid second was a good result with no risks.

Arguably, young Elgin crew Scott Mutch and Greg McDonald were the stars of the event. Belying their lack of experience on only their 4th rally, they arrived at the midday service in a stunning 8th overall from a start number of 39. A further top 10 time on Stage 4 reinforced this position before they slipped off the road in stage 5, loosing over 8 minutes in the process and dropping back to 57th overall. Third in the Subaru Cup was scant consolation, although they sit at the head of the standings alongside Thomson as they head to their home event.

The next round of the ARR Craib MSA Scottish Rally Championship is the McDonald & Munro Speyside Stages on 23 April.