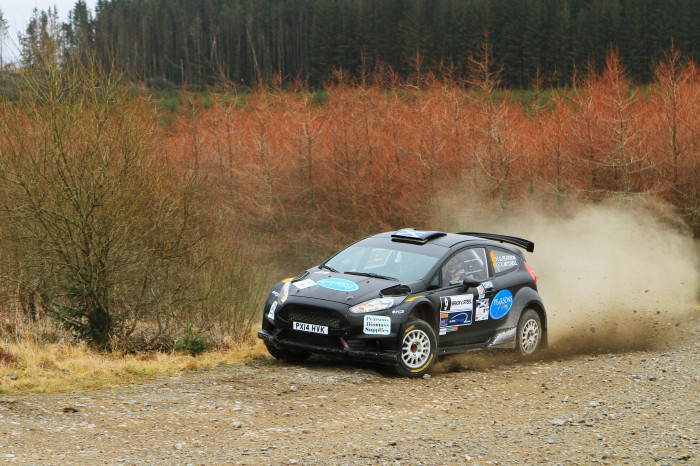 Duns crew Garry Pearson and Robbie Mitchell have got their 2016 ARR Craib Scottish Rally Championship campaign off to a flying start, leading the championship after the Arnold Clark Jury’s Inn Snowman Rally and the Brick & Steel Border Counties Rally.

Pearson took a credible fifth on the treacherous Snowman rally in what was his first rally in the car, before tying for first on the Border Counties, with the tie break going in favour of rival Jock Armstrong.

“I don’t think we could have expected what is almost a ‘dream start’ for us.” Garry said.

“We knew going into the Snowman we would have a very difficult first rally and we seem to have gone from strength to strength from that. We’ve definitely more to give, but we are learning and want to keep learning.”

His pace was good enough to win round 2 of the championship in Jedburgh, but Pearson is not down beat about coming so close to a maiden SRC win but not taking it.

He said: “I think we can only build on our result at the Border Counties. We didn’t expect to or try to be in first position or tied first. We tried our best in the last two stages to keep in third position and ended up challenging second.”

Next up on the SRC calendar is the McDonald & Munro Speyside Stages on 23 April, and Garry is aware that it will be difficult to repeat his performance from the Border Counties.

He said: “We’ll take each rally stage by stage, but we’d certainly like to think we can compete. It’s been 6 years since I’ve been in Elgin so I’m sure the experienced competitors will be hard to beat.”

Pearson’s R5 Fiesta is one of the most competitive cars in the field this year, but he isn’t the only man campaigning the car in 2016. Robert Woodside is also using the car in the British Rally Championship, which is why we saw Garry’s Fiesta change from the white in Inverness to black in the Borders. However, the Duns driver trusts both the team and his fellow driver.

“All the best to Robert in the British Championship. Dom Buckley RSC are a great bunch of lads and I’ve confidence in them.”

The 2016 Scottish Rally Championship season looks set to be, even at these early stages, one of the biggest title battles in recent years. However, Pearson refuses to be drawn into any title talk.

“It’s hard to say how close it will be, we’ll concentrate on our plans and see where that takes us.”