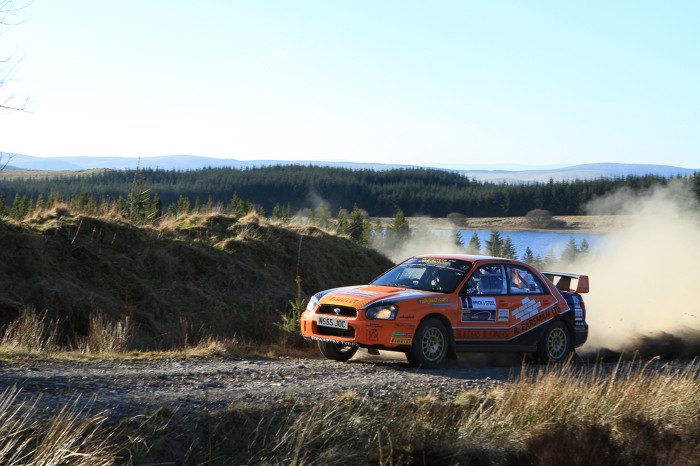 However, they didn’t have it all his own way. Armstrong won the first three stages of the rally, but after service saw his lead eroded by the fast charging Garry Pearson and Shaun Sinclair, with Pearson tying for overall time with Armstrong. The tie break decider went in Jock’s favour to give him his first ever win in the Borders.

He said: “The result on the Borders was amazing as I have not had a lot of luck there over the years. It’s good to collect full points as this hunt to be 2016 champion is going to be closely fought.”

“Garry has showed some good pace on both rallies now alongside Shaun and Mike [Faulkner], not to discredit Mark McCulloch whose stage times are good too. Donnie has not had any luck last rally with engine issues, so it’s going to be a short year with no mechanical issues required.”

The Castle Douglas driver had a little bit of a moment at the start of SS4 near Jedburgh, where his car wasn’t in gear when he initially tried to launch his Subaru Impreza into the stage. He’s adamant this won’t happen again on the next round of the championship, the McDonald & Munro Speyside Stages.

“[The plan for the Speyside is] just like the last rally, quick out of the box and no mistakes like forgetting to put it in gear on the start line!” He said.

“But Paula has kindly made a start line game plan…”

Coming into the season as the man everybody wants to beat, it could be expected that Jock would be feeling extra pressure. But the main challenge he faces seems to be cleaning the loose gravel from the stages for the following competitors.

He said: “We’re getting used to being the first car on the road. That leaves an advantage for the braking zones for the people behind you. Still we’re enjoying the challenge and publicity that goes with being defending champion.”

Even at these early stages, the 2016 Scottish Rally Championship looks like it has the potential to be one of the closest title fights in history.

Speaking about the potential title decider in September, the Galloway Hills Rally, Jock said: “Hopefully there will be a lot of competition still there as that is what it needs. Maybe there should be a joker round where you can double your points on your favourite stages!”

The next round of the SRC is the McDonald & Munro Speyside Stages in Elgin, on 23 April.