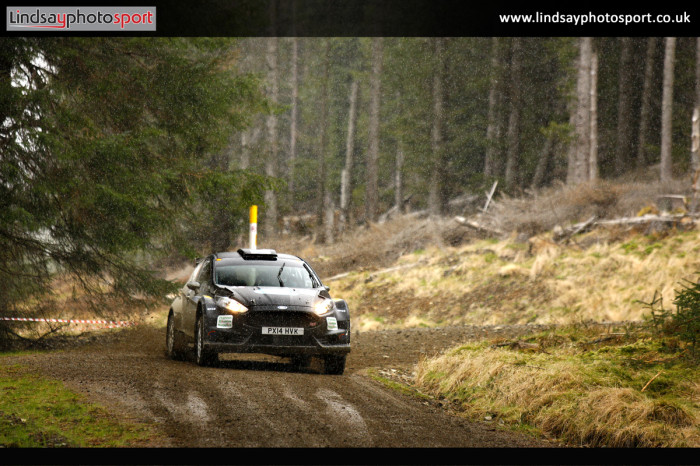 Pearson, co-driven by Robbie Mitchell, won his first ever SRC event at the wheel of his Ford Fiesta R5, extending his championship lead in the process.

Pearson was always in amongst the top times, and despite a puncture on SS5 and a near rally ending spin on the final stage he came home to take the win.

At the finish in Elgin, he said: “Really good. It was pretty close, we spun it in a fourth gear corner, a bit lucky but we’re happy to be here!”

The conditions on the 20th running of the Speyside stages were challenging for the competitors, especially in the opening Cooper Park tests where a pre-stage rain shower had made the tarmac stage very treacherous. However, despite the odd scattering of hail stones, conditions were predominantly dry albeit quite slippy.

SS8 Gartly Moor 2 seemed to be a particular favourite, with plenty of drivers exiting the stage with beaming smiles. Jock Armstrong managed a maximum speed of 112mph through the test, so it’s not hard to see why.

Quintin Milne described SS8 as “the best stage he had done in five years,” while Ross MacDonald likened it to a “near death experience”, saying it was one of “the best stages ever.”

Coming home in second place overall and continuing their battle with Garry Pearson from the Border Counties rally were Jock Armstrong and Paula Swinscoe. However, if it weren’t for a spin in the second Cooper Park stage, it could have been another win for the defending champions.

Armstrong fought back up the leaderboard in his Subaru once the crews headed into the forests, winning the first gravel stage Knock More. However, the Castle Douglas driver had his work cut out to keep up with the more competitive R5 of Pearson, but came within eight seconds at the end after Garry’s high speed moment.

Jock said: “It’s been a good event for us really. Garry got carried away with himself [with the SS10 spin]! Glad to see I’m putting somebody under pressure!”

Finishing third overall, 33 seconds back from Armstrong and Swinscoe were Mike Faulkner and Peter Foy in their Mitsubishi Lancer Evolution IX. Faulkner once again gave it everything the car could give, but unlike on the Borders this time it paid off with a podium finish.

No real dramas befell the pair, who took another strong haul of points home to aid their championship hopes.

Mike said: “It’s good to be back on the podium. We gave it everything we’ve got, and had a good battle with John [MacCrone] towards the end there.”

John MacCrone and Rhianon Gelsomino finished the Speyside fourth overall in their Ford Fiesta R5, fighting right at the sharp end straight from the off.

After two difficult events on the Snowman and the Border Counties, MacCrone was more confident in the car, particularly in the fast sections, and was finally showing what he and the R5 Fiesta were capable of.

However, he lost 50 seconds on SS5 Gartly Moor 1 whilst running in third overall when his Fiesta’s front driveshaft broke and he had to complete the remainder of the stage with just rear wheel drive.

John put in a spirited drive though and fought back to finish a mere six seconds from Faulkner’s third place, taking a stage win on SS7 and one on the final test to outline his pace.

Fifth place was once again a fine finish for Banchory driver Bruce McCombie and co-driver Michael Coutts in their Mitsubishi Lancer Evolution IX, although McCombie was left bemoaning his consistency after being at the sharp end on some stages and not so quick on others.

McCombie was loving the stages though, remarking at several stage ends that he “just had to push.”

His biggest scare came in SS5, where he exited the stage with just one fully inflated tyre on his Mitsubishi.

He eventually finished 49 seconds back from MacCrone in fourth.

Dale Robertson with Stuart Loudon alongside took his Mitsubishi Lancer Evolution IX to sixth place overall, another strong finish for the Duns driver.

His rally was not without problems though, with his Evo trailing his rear bumper at the end of SS4. The rear diff also let go at the end of the rally, but luckily for Robertson it was in the final stage which was only 2.79 miles long.

Seventh was the best Mark McCulloch could manage, which was disappointing considering how much more comfortable he was getting in his new Mitsubishi Lancer Evolution IX. It could so easily have been sixth, as he trailed Robertson by a mere five seconds come the finish outside Moray College in Elgin.

His run was not helped by a cooling issue with the engine at the end of SS8 Gartly Moor 2, or an off road excursion on SS4, but he managed to get the car to the end safely.

Mark said at the end of SS5: “We have been changing things with the car stage by stage. The car has been excellent, it’s just the driver that needs improving!”

Grabbing their best finish of the season in eight place were Mitsubishi Evo IX crew Andrew Gallacher and Jane Nicol.

The pair managed to get through the ten special stages relatively unscathed, and were rewarded with a strong points haul for the championship.

Gallacher was well up for the fight, even when he only had a few stages left to do.

Taking a fantastic ninth overall on their first event of the season were Freddie Milne and Canadian co-driver Charley Sayer-Payne.

Milne’s Mitsubishi Lancer Evolution IX was going strong, and was locked in a very close battle with Gallacher, Barry Groundwater and John Wink towards the end of the rally despite a flat tyre on SS4.

At the end of SS9, Freddie was showing no signs of holding back. He sent a warning to his rivals: “The car is fully insured for this event!”

Gallacher won the battle, but Milne was left delighted with his performance.

Freddie said: “I’m very, very happy. If you’d have told me I’d have been top 20 let alone top 10 this morning I would have been buzzing! That last stage was something else.”

Rounding out the top ten were Barry Groundwater and Sean Donnelly, who beat the struggling Donnie MacDonald and Andrew Falconer to the top ten by just two seconds.

Groundwater had a trouble free run, although at times was perplexed by the times as he felt like he was going faster. Nevertheless, he enjoyed himself and took another solid points scoring finish.

Top seeds that struggled included Donnie MacDonald, who picked up a puncture on both runs through Gartly Moor and suffered car problems in the last couple of stages, meaning the Snomwan winner could only salvage 11th.

After his strong podium place on the Border Counties in a Focus WRC, Shaun Sinclair was back out in his Subaru Impreza WRC with Kirsty Riddick on the notes. Sinclair could only manage twelfth on the Speyside, after his Subaru suffered from an intermittent engine throughout the morning loop.

2014 Scottish Rally Champions Euan Thorburn and Paul Beaton were also out on the Speyside in their Peugeot 208 T16 R5 although weren’t scoring SRC points. The duo were leading the way after eight stages but after SS9 were complaining with issues at the rear of the Peugeot, which eventually was diagnosed as a broken differential, which led to their retirement.

The next round of the 2016 ARR Craib Scottish Rally Championship is the Jim Clark Rally on 5 June.

The rally which usually runs on closed pubic roads in Berwickshire is returning to the legendary Kielder Forest for the second year running in 2016.