Class Battles as Close as Ever on Speyside Stages 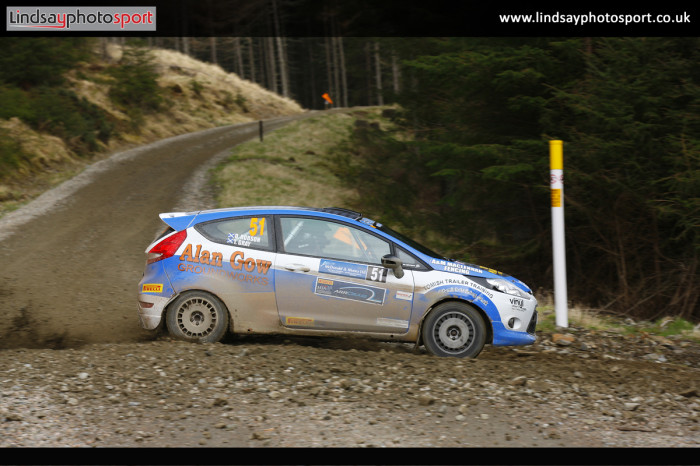 The 2016 ARR Craib Scottish Rally Championship was back in action for round 3 of the series
in Elgin on 23 May, the McDonald and Munro Speyside Stages.

Garry Pearson and Robbie Mitchell took their debut SRC win on the event, but there was
plenty more going on up and down the field in the various classes.

For the first time this season, it wasn’t the bright yellow Corsa 1400 of Angus Lawrie that
took the spoils in class 2. Lawrie, co-driven by Paul Gribben, missed out on a hat-trick of
class wins after never making it to the end of the rally after the transmission failed on their
Vauxhall.

Instead, it was fellow Castle Douglas driver Scott Sloan and co-driver David Sloan that took
the spoils in their red Vauxhall Corsa. The pair were comfortably ahead of Grant MacRae
and Martin Bruce of Portree’s Peugeot 205 Rallye which took second in class.

Class 3 was one by a third different driver in three events. On the Speyside, it was the
Peugeot 205 of Robbie Beattie and David Findlay that was fastest over the 10 special stages,
but there was only 20 seconds it between the pair and second place finishers Donald and
Scott Peacock in their similar 205.

Luke McLaren from Blanefield and Phil Kenny from Washington took third in class, 2 and a
half minutes behind winners Beattie and Findlay in another Peugeot 205.

Class 4 for up to 1600cc two wheel drive cars was won by 2015 Scottish Junior Champion
Thomas Gray  (pictured above) with experienced Jedburgh co-driver Dave Robson alongside. Gray finally got
to grips with his R2 Fiesta in the Moray and Aberdeenshire forests, taking the class win by
over 1 and a half minutes from the Citroen C2 of David Martin and Neil Ewing.

James Robertson and Colin Maxwell finished a mere six seconds shy of Martin and Ewing in
third, with their fellow Citroen C2. Class winners from the Borders Steven Smith and Daniel
Johnstone failed to finish, with engine problems aboard their Mk2 Escort.

Wrapping up another class 5 victory were Canobie’s John McIlwraith and Scott Young from
Duns in their Ford Escort Mk2. Turriff’s Andy Chalmers finished seven places back overall in
a similar Escort with Martin MacCabe of Glasgow in the navigators’ seat.

Less than thirty seconds back were John O’Kane and George Finlayson, who brought their
Escort back to the finish at Moray College in Elgin third in class 5.

Class 6 for historic vehicles was taken for the second time this season by Brechin crew Ian
and Sandy Milne in a Ford Escort Mk2. There must be something about the northern
forests, as Ian’s other class win in 2016 came on the Snowman rally in Inverness. Ian and Sandy were the only finishers and starters in the class.

Class 7 for larger engine front wheel drive cars was won by Ian and Kathryn Forgan in their
intriguing 2 litre Ford Ka although they weren’t registered for SRC points. Instead, the SRC
class win went to Caroline Carslaw who took second in class 7 with Ross Williams guiding
her through.

The battle for class 8 honours was a good spirited, competitive affair, with Banchory’s
Quintin Milne and Dougal Brown from Forres fighting tooth and nail to edge each other out
throughout the event in their Mk2 Escorts.

In the end, it was Quintin who triumphed after Dougal picked up a puncture on the
penultimate stage, with exactly 1 minute separating the pair at the finish. However, Brown
took maximum class points and the class win as Milne is not registered for points.

Winners of class 9 for two wheel drive cars with engines larger than 2 litres were Scott Kerr
and Stephen Clark in a Ford Escort Mk2.

Class rivals Donald and Rachel Brooker took victory in their BMW 130i on the Border
Counties, but left the road on special stage 6 of the Speyside and subsequently retired from
the event.

Nobody took any points in this class as Kerr and Clark were not registered for SRC points.
Fraser Wilson and Craig Wallace finally got their season up and running on the Speyside,
winning class 10 for Group N machinery in their Mitsubishi Lancer Evolution IX. It still wasn’t
a completely trouble free event as the Port William driver suffered a puncture, but it was a
much needed result after a difficult start to the season.

Just ten seconds behind at the finish was the similar Mitsubishi Lancer of Alasdair Graham
and Laura Stuart. Graham has impressed this season after taking a great class win last time
out in the Borders.

The SRC Challengers was one of the most finely poised championships as the SRC headed to
Elgin, with John Wink lying just a single point ahead of rival Scott McCombie in the
championship.

However, it was neither Wink nor McCombie who took the spoils on the Speyside, after
McCombie broke his suspension after leaving the road on SS5 and Wink could only manage
fourth, with an excursion up a bank on SS7 not helping the Huntly driver’s cause on his
home event.

Instead it was Alasdair Graham who won the category in his Mitsubishi Lancer, but only
through the tie break system. Local boys Scott Mutch and Greg McDonald put in another
giant killing performance proving their scintillating pace in the Borders was no fluke, having
to settle for second in class due to their inferior time to Graham and Stuart on SS1 Cooper
Park.

Just eight seconds behind in third were Ross MacDonald and Matthew Johnstone.
MacDonald thoroughly enjoyed himself on his way to 16th overall, in what was the closest
finish in all the championships.

The www.usedcarparts.co.uk Subaru Cup for GC8 specification Subaru Imprezas like Colin
McRae used to drive was won by Scott Mutch and Greg McDonald, who belay their seeding
position of 31st to finish 15th overall.

Matthew Thomson and Ian Graham took second in the category, with Drew MacDonald and
Ken Bills filling the final slot on the podium.

The Scottish Rally Championship bursts back into action on 5 June for the Jim Clark Reivers
Rally. Usually held on the closed roads of Berwickshire, the event will head back to the
legendary Kielder forest for a second year running.