Pearson & Mitchell Top of the Table after 3 Rounds 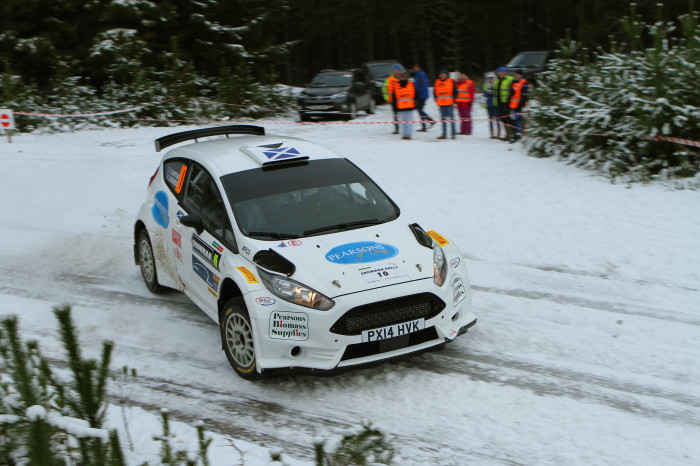 Garry Pearson and Robbie Mitchell have enjoyed a “surprising” 2016 ARR Craib Scottish Rally Championship campaign after the first three rallies of the season, finding themselves on top of the championship table.

The Duns crew, who compete in a Ford Fiesta R5, took fifth overall in Inverness in treacherous conditions, second only due to the tie break in Jedburgh and outright victory on the latest SRC round up in Elgin.

Reflecting on his season so far, Garry said: “We’re delighted so far for sure and surprised. We are aware though that everyone else is improving as well so we need to keep improving ourselves.

“Winning the Speyside was a great feeling, big thanks to Dom Buckley RSC and M-Sport for such a competitive car. It only makes us hungrier though!”

Pearson came into the season with next to no experience of his R5 Fiesta and minimal experience of four wheel drive machinery, so has adapted very well to the challenge. However, he is aware that it won’t be easy to stay out in front.
He said: “The aim for the rest of the season has got to be to try and stay with the top guys in the remaining rounds; our experience of some of the events isn’t great so we need to concentrate on our own events and see where we come out.

“We’re still learning every event and don’t want to get ahead of ourselves. A big help for us has been coming from the Pirelli tyres which seem to be giving us the edge right now, so we must thank Pirelli for their hard work and AW Motorsport for their on event support.”

Pearson said: “When you’ve been in two wheel drive cars since 2008 and get the shock chance to drive an R5 you look forward to every single second in the car and the Scottish is no different.

“It’s nice to have the BRC in Scotland but we won’t be able to compare times as we have no recce, which is a shame.”

Robbie Mitchell added: “We’re very happy to find ourselves consistently near the front of the SRC field. The goal has to be to keep on as we are, to keep learning and working together.

“It was great to win an event and we really enjoyed it but it won’t change our preparation or approach to every stage.

“The Scottish has always been a great event and it will be interesting to see our times compared with the leaders, although as Garry said without a recce you really can’t compare SRC times with BRC times.”

Pearson and Mitchell will next be out looking to defend their championship lead in Dumfies on Saturday 25 June.