McCombie Looking Forward to the rest of the Season 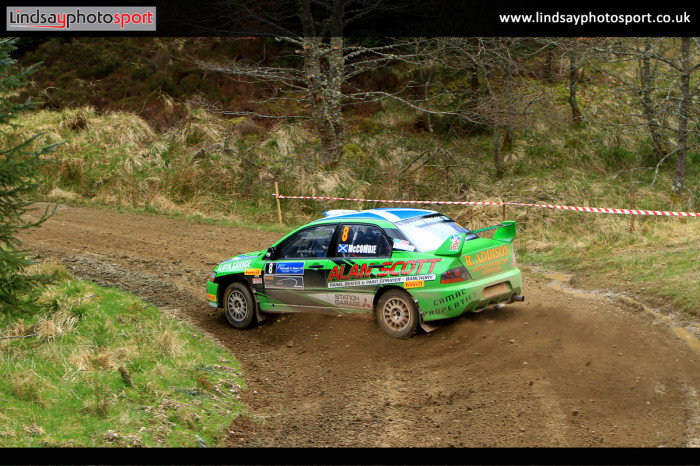 Bruce McCombie and Michael Coutts have once again been one of the most consistent performers in this year’s ARR Craib Scottish Rally Championship.

The 2015 championship podium finishers are once again competing in their Mitsubishi Lancer Evolution IX, and are content with how their 2016 campaign has been after three rallies.

Bruce said: “The season so far has been steady, it’s always good to finish in the top 5 with the level of competition in the SRC. The car has never missed a beat.

“We are looking forward to the rest of the year but we have to go a bit quicker to try and catch the guys in front.”

McCombie was another driver to revel in the challenging and unpredictable conditions that were thrown up on the Arnold Clark Jury’s Inn Snowman Rally in February. He was involved in a battle for the lead for the first part of the event before a mistake in the afternoon curtailed his chances.

He said: “Best performance of the year was at the Snowman when we were chasing for a win, setting some good stage times until I made a **** up and got stuck in a ditch, ending up ninth. You can’t beat snow in Inverness!”

McCombie is looking forward to the rest of the season.

Bruce said: “I think there will be a good buzz at the Scottish with the British guys competing. We’ll see what pace we have against them, but it’ll be good to do 65 miles. It’s been too long since the last rally so we’ll be a bit rusty.

“I’m looking forward to my local event the Grampian Stages, with scrutineering and the start being five miles from my house, which is a boost.

“It’ll be good to do the Galloway Hills as we haven’t done that since 2000 when we broke the gearbox one mile into the first stage!”

McCombie and Coutts will next be in action on 25 June on the Scottish rally.