Positive start to the season for McCulloch 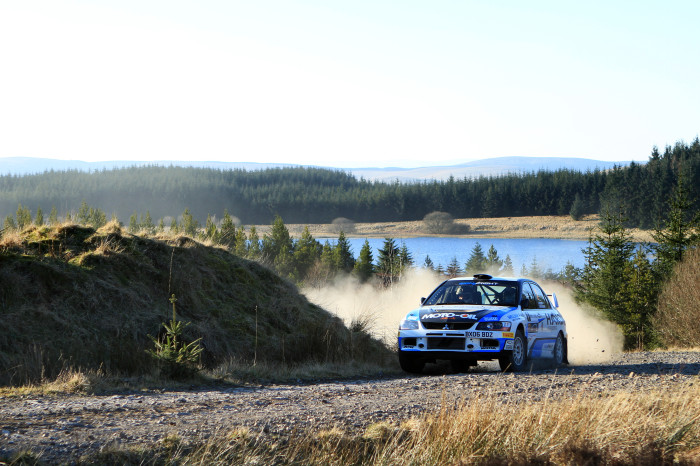 Mark McCulloch and Michael Hendry have made “a step in the right direction” after three rounds of the 2016 ARR Craib Scottish Rally Championship.

McCulloch, driving a different Mitsubishi Lancer Evolution IX to the one he used last year, has spent some time getting to know the new car but is relatively happy with how the season has gone so far.

He said: “The start of our year has been good, a few bits of bad luck and silly mistakes which have cost us some places but generally a step in the right direction compared to last year.”

McCulloch got his season off to a flying start, battling for the lead and holding it on the Arnold Clark Jury’s Inn Snowman Rally back in February. Ultimately, he had to settle for third as his Evo suffered a puncture on the fifth and final stage.

“It was great to be leading an SRC event, Mark said: “but for whatever reason I tried not to get worried about it on the day. We just had a very clean and tidy approach to every stage but unfortunately our luck ran out on the last one with the puncture.

“Really for the rest of the year we need to just look at getting as high up the overall results as we can to try and get a good final position in the championship.”

The Scottish Rally Championship is notorious for being ultra-competitive and subsequently very hard to succeed in. Mark is aware that if he is to finish high in the championship he is going to have to pull out all the stops.

“Ideally we will be aiming to finish in the top 5 on the rest of the events this year and a podium would be a great achievement in a competitive field but any one of the top 20 drivers can put in a strong result on the day, which makes the championship really good!”

The next round of the SRC is the RSAC Scottish Rally in Dumfries on 25 June. The event sees the Scottish crews run on the same stages as the drivers from the MSA British Rally Championship, giving the SRC crews extra mileage in comparison with their other events.

Mark said: “The BRC adds to the event and the extra mileage will make for a new challenge but the only guys we will be worrying about are the SRC crews in front of us!

“The Scottish stages are normally very good and it always has a good atmosphere on the event although it has been very bad to me for the past two years.

“Last year we didn’t finish after I damaged the front subframe and in 2014 I rolled my Subaru badly so we will be hoping for a better run this time out.”

After competing on the DMACK Carlisle Stages on 11 June, Mark and Michael Hendry are in good shape heading into the Scottish on 25 June.