Faulkner: “We believe we can win” 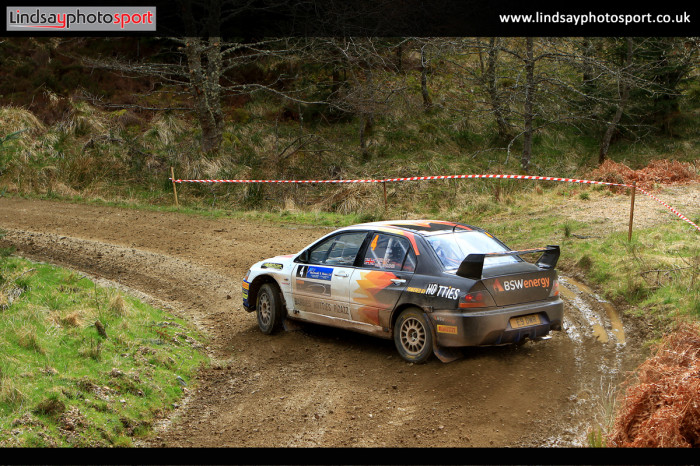 Mike Faulkner and Peter Foy have had a varied first half to their 2016 ARR Craib Scottish Rally Championship season aboard their Mitsubishi Lancer Evolution IX.

Last year’s championship runners up struggled for grip and confidence on the treacherous Arnold Clark Jury’s Inn Snowman Rally, but hit back with a fourth place finish on the Brick & Steel Border Counties Rally and a third overall on the McDonald & Munro Speyside Stages.

Despite a lower championship position than he has become accustomed to after three rallies, Mike remains unfazed and confident of his chances.

He said: “We try not to have pre -season expectations as that adds pressure but we go into every event determined to win, however realistic that is it doesn’t matter. It’s what motivates both of us to do it and give 100%.

“For the second half of the season we believe we can win and that’s what we want to do whether that’s realistic or not, it doesn’t matter.”

Over the last couple of rallies, Faulkner has pushed his Mitsubishi to the absolute maximum, but has struggled to match the front running pace of championship leader Garry Pearson in the R5 Fiesta and defending champion Jock Armstrong in the Subaru despite all of his efforts.

Asked what he can do to close down the gap, he said: “In reality there is nothing I can do.

“We will drive 100% and hope that is enough to put the pressure on and hopefully some luck will come our way.”

Faulkner is looking forward to the event in which he is a previous winner.

“The Scottish is great and winning the event was a life time ambition for us both achieved.

“The stages are fantastic and to be in the midst of the BRC event will be a great opportunity to raise the profile of the SRC and prove how quick the pace is to be in the top 10 of the championship.”

ARR Craib Transport Ltd provides transport and logistics services within the local, radial, UK and international transport markets.  The company operates more than 300 vehicles and 500 trailers controlled from bases and distribution hubs in Aberdeen, Cumbernauld, Stockton and Great Yarmouth. It employs around 450 people.

Copyright free pictures to accompany this release are available on request.