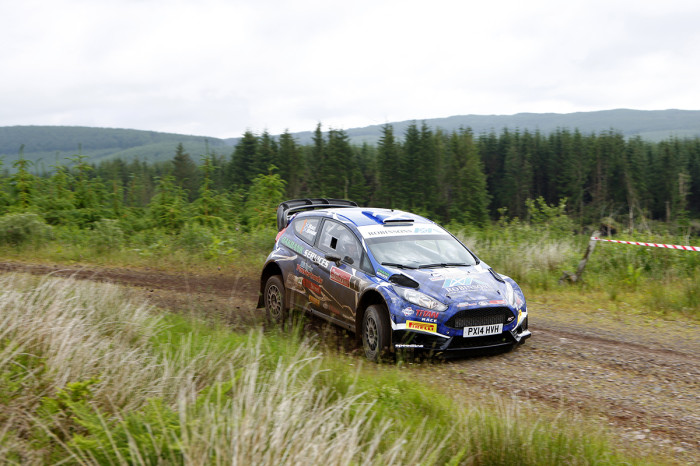 Round 4 of the 2016 ARR Craib Scottish Rally Championship sees the crews head to Dumfries for the RSAC Scottish Rally.
The competitors have an extra 20 competitive miles to complete as for the first time in two years the SRC and the MSA British Rally Championship drivers are competing on the same event, which will see current champion Jock Armstrong come up against previous Scottish champions and rivals David Bogie and Euan Thorburn.
2015 Scottish Champions Jock Armstrong and Paul Swinscoe head the SRC entry list seeded at number 9 in their Subaru Impreza. The Castle Douglas driver has enjoyed some great battles with Duns’ Garry Pearson throughout the season, and will be looking to overhaul the Fiesta driver in the South West of Scotland. However, Jock is still nursing a shoulder injury that he sustained when cycling on his mountain bike, but hopes it won’t hold him back.
Garry Pearson and Robbie Mitchell are seeded just behind Armstrong and Swinscoe, and are fresh from a maiden victory on the McDonald & Munro Speyside Stages. The R5 crew head the championship after three rounds, and are looking forward to the Scottish.
Garry said: “When you’ve been in two wheel drive cars since 2008 and get the shock chanceto drive an R5 you look forward to every single second in the car and the Scottish is no different.
“It’s nice to have the BRC in Scotland but we won’t be able to compare times as we have no recce, which is a shame.”
Mike Faulkner and Peter Foy are also heading to Dumfries in form and full of confidence after a first podium finish of the season last time out in Elgin. Seeded 16th for the Scottish, the Wigton driver is aiming to push the championship pace setters Armstrong and Pearson all the way.
He said: “For the second half of the season we believe we can win and that’s what we want to do whether that’s realistic or not, it doesn’t matter.
“We will drive 100% and hope that it is enough to put the pressure on and hopefully some luck will come our way.”
Shaun Sinclair has had an indifferent 2016 so far, with a superb third overall on the Brick & Steel Border Counties Rally at the wheel of a Focus WRC but on the other two rallies has struggled with various issues in his Subaru Impreza WRC.
The Impreza will be back out for the Scottish despite being up for sale, where Sinclair is hoping to get a decent result, otherwise he may not complete the rest of the Scottish championship season.
Running as car 19 and seeded fifth of the SRC runners are Inverness duo Donnie MacDonald and Andrew Falconer with their Mitsubishi Lancer Evolution IX. Donnie won the opening rally of the 2016 season, the Arnold Clark Jury’s Inn Snowman Rally, but suffered various issues on the proceeding two events that saw him slip down the championship table.
He will also be competing in the BRC National Cup as well as the SRC this weekend, making the Scottish an interesting event for him.
He said: “At the start we will treat the rally as normal, but we will just have to see where we are at the half way point of each championship.
“They’re great stages, I love Ae forest and I think all the Scottish stages suit an Evo!”
Bruce McCombie and Michael Coutts have enjoyed themselves this season after three of the six SRC events. In with a shot of victory on the Snowman before a mistake, Bruce has once again shown the consistent form that put him in with a shout of the 2015 SRC title last year. However, he acknowledges he needs to go a bit quicker if he wants to have the same chance in 2016.
McCombie said: “We are looking forward to the rest of the year but we have to go a bit quicker to try and catch the guys in front.”
Mark McCulloch and Michael Hendry have had a great 2016 season so far, sitting equal third in the championship standings with Dale Robertson and Stuart Loudon.
They almost took their maiden win on the Snowman but for a puncture to cruelly deny them the chance, but have showed steady pace throughout the year as Mark continues to get to grips with the new Evo IX he acquired for 2016.

McCulloch said: “For the rest of the year we need to just look at getting as high up the overall results as we can to try and get a good final position in the championship.
“The Scottish stages are normally very good and it always has a good atmosphere although it has been very bad to me for the past few years, so we will be hoping for a better run this time out.”
Making his first SRC appearance of 2016 on the Scottish is Dumfries driver Rory Young at the wheel of a Ford Fiesta R5, one of 16 R5 cars on the entry list.
Competing on his home event fresh after a 13th overall on the DMACK Carlisle Stages on 11 June, Young will be looking to set some competitive stage times and upset some of the SRC regulars.
Ninth SRC runner and running as car 24 are Fred Milne and Millom co-driver Chris Williams in their ex-Barry Groundwater Mitsubishi Lancer Evolution IX. Milne secured a superb ninth overall on the McDonald & Munro Speyside Stages, and will be looking to continue that form into the longest SRC rally of the year.
Milne was another to compete on the recent DMACK Carlisle Stages, taking a fine seventh overall and first in his class.
Andrew Gallacher and Jane Nicol start as the tenth SRC crew on the Scottish aboard their Mitsubishi Lancer Evolution IX.
The Hurlford driver has been dogged with issues this season, but scored a top 10 finish last time out in Elgin where his car seemed to be back to full working order, so he will be hoping his Evo holds together strong and he can mount a serious push on the Scottish.
The RSAC Scottish Rally will start and finish in Dumfries on 25 June, using classic forest tests such as Ae.
You can keep up to date with the SRC via the website www.scottishrallychampionship.co.uk
or through Facebook and Twitter (@MSA_SRC).