Battles within SRC classes as exciting as ever 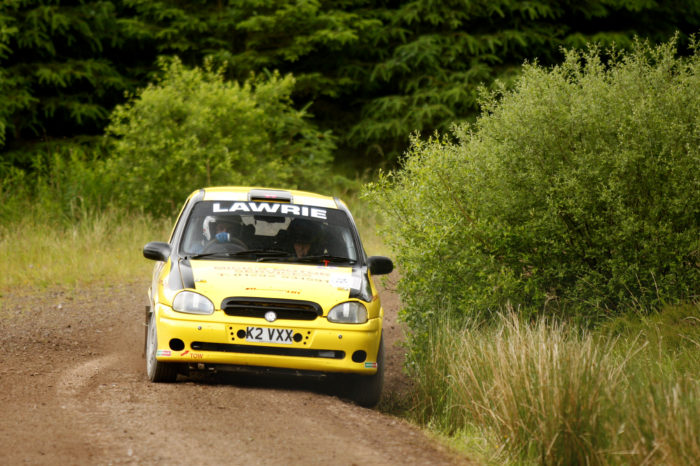 Round 4 of the 2016 ARR Craib Scottish Rally Championship saw the competitors head to the South-West of Scotland and Dumfries for the RSAC Scottish Rally, boasting over 60 miles of competitive forest action.

There were varied conditions on the day, with the morning loop being mostly dry albeit rough in places until the afternoon where patchy rain storms made the forest stages much more muddy and slippery.

There were plenty of great battles within the various classes as ever on the Scottish.

Donald and Scott Peacock from Bridge of Dee grabbed their second SRC Class 3 win of the season on the Scottish in their Peugeot 205, and were the only pair to make the finish in Dumfries after rivals Luke McLaren and Robbie Beattie both failed to make it through the morning loop.

Penpont’s Jim Robertson and local Dumfries boy Colin Maxwell steered their Citroen C2 to the finish as top class 4 runner in the SRC and second quickest in the class on the event behind the Corsa of Alexander Curran.

The Scottish provided a high level of attrition for the 1600cc two wheel drive cars, with the Citroen C2’s of Murray Coulthard (Twynholm), David Martin (Belford), Gina Walker (Duns) and Andy Struthers (Libberton) and the Fiesta R2 of Thomas Gray (Tore) all failing to make the finish.

Class 5 was won by Andy Chalmers from Fyvie and Martin MacCabe from Glasgow in their 2 litre Ford Escort Mk2. The pair took their first class win of the season in the process.

The championship leaders beat John McIlwraith (Canonbie) and Scott Young (Duns) who took second in class in their similar Escort, almost 2 minutes behind Chalmers and MacCabe.

Class 6 for historic specification vehicles was won by Brechin’s Ian Milne in his Escort Mk2, who was the only SRC started and finisher in the category.

Class 7 once again saw a battle between Kevin Gray and Caroline Carslaw, and this time the battle was won by the Invergordon driver in his Vauxhall Astra, making it two wins a piece for the two rivals.

Carslaw took her Fiesta to second in class with Tobermory’s Ross Williams in the co-driver’s seat. The pair finished just under a minute behind Gray and Daniel Christie, with the class 7 championship becoming one of the most intriguing to watch.

Points leaders Grant Inglis and Robert Gray from Glasgow failed to finish the Scottish, crashing off on SS5, Rivox.

Class 10 for Group N machinery was won for the second time in 2016 by Alasdair S Graham (Paisley) and Laura Stuart (Alford) in their Mitsubishi Lancer Evolution IX. This win sees the duo extend their championship lead over Fraser Wilson (Port William) and Craig Wallace (Kirriemuir) who rolled their Mitsubishi on the fourth special stage.

Conon Bridge’s John Morrison and St Andrews’ Peter Carstairs took second in the class in their Evo IX. The pair were also scoring points for the BRC National Cup where they took third in their class.

The SRC Challengers once again saw a thrilling, tight contest with several drivers in contention for the win.

In the end it was Banchory’s Scott McCombie and Workington’s Mark Fisher who took the win in their Mitsubishi Lancer Evolution IX, less than 30 seconds ahead of Alasdair Graham and Laura Stuart.

Points leaders after round 3 John Wink from Huntly and John Forrest from Inverurie were in the battle for the win but rolled their Mitsubishi on the final stage of the event.

The www.usedcarparts.co.uk Subaru Cup for older specification Subaru Impreza’s was won by Matthew Thomson and Ian Graham from Inverurie as championship rivals Scott Mutch and Greg McDonald from Elgin finished last of the classified runners after an off road excursion, but still second in the Subaru Cup.

Fellow championship contenders Geoff Goudie and Drew MacDonald failed to finish the event, with neither driver managing to make it to the afternoon loop of stages.

The next round of the 2016 ARR Craib Scottish Rally Championship is the Coltel Grampian Stages on 13 August.