Silverware the ambition for MacDonald and Johnstone 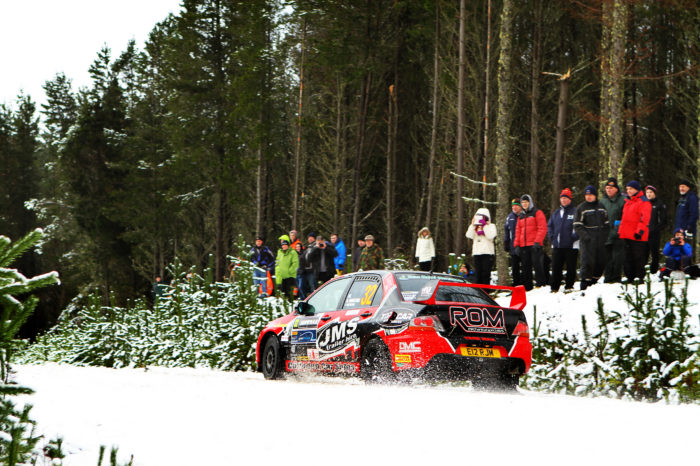 MacDonald and Johnstone are currently sitting 12th in the overall standings, but more importantly for them are lying 3rd in the SRC Challengers, a mere six points back from leaders Alasdair Graham and Laura Stuart.

Ross said: “The season so far has been good. I feel we have progressed with the car every rally. There’s still a lot to learn but we are feeling happy with what we have achieved so far.

“The only real problem we have had was a puncture on SS1 on the [RSAC] Scottish where I should have stopped to change the wheel instead of carrying on which caused more damage, but you live and learn.”

The secret to MacDonald’s success this season has been consistency, with the Mitsubishi driver having finished in the points on every single round so far, but he has backed up that consistency with an impressive turn of speed.

“The season highlight so far has to be our 14th overall on the Border Counties, which is our highest ever overall finish in the SRC,” he said.

“But hopefully in the last two rallies we can better that!”

MacDonald and Johnstone were the 2015 Class 7 Champions at the wheel of their Honda Civic, subsequently stepping up to four wheel drive machinery this year. However, adapting to this change has been trickier than Ross was expecting.

He said: “The change from the Civic to the Evo has been a bigger challenge than I was expecting but it’s been a good one.

“As I had only driven front wheel drive cars on gravel before it’s taken a bit of adapting and to be honest I was guilty of over-driving the Evo if anything, but I am slowly getting used to how to set the car up for corners etc but still trying to find the limit of what the car can actually do on gravel.”

Despite some impressive results thus far, MacDonald is not content with what he has achieved and is vying to do more in the remainder of the year.

“In the last two rallies we are hoping to pick up our pace a bit more as we have made some significant changes to the set-up of the car.

“We’re really hoping that might give us the edge over the boys that are around us, particularly in the Challengers cup.”

With just the Coltel Grampian Stages and the Galloway Hills Rally remaining on the calendar, the battle within the SRC Challengers (for drivers who hadn’t finished in the top 10 of an MSA event in the last 10 years) is finely poised, and it is one that MacDonald is looking to win.

He said: “We’re sitting third at the moment and if I’m honest the Challengers cup has been our main focus this year as we can’t really compete in our class [12] unfortunately.

“We believe we can do something in the last couple of rallies to be not too far away at the end but there are a lot of fast boys in there who are getting faster and faster so it will be tough but we reckon achievable.

“It would be great to have some silverware to show for the season!”

The next round of the 2016 ARR Craib MSA Scottish Rally Championship is the Coltel Grampian Stages Rally in Aberdeen on 13 August.