Wilson: “We’ll continue to give it our best shot” 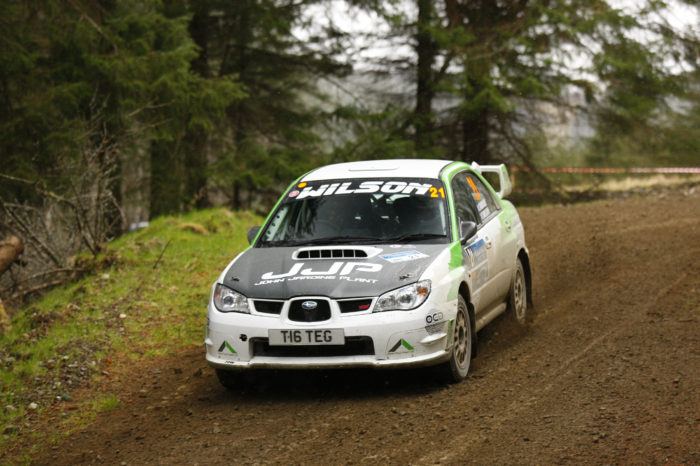 Dalbeattie’s Iain Wilson and Haugh of Urr’s Keith Riddick have had a great 2016 ARR Craib Scottish Rally Championship season after four rounds in their Subaru Impreza.

The pair, who are one of few Subaru crews in the championship in what is a Mitsubishi-infested championship, are lying a brilliant 13th in the overall championship and a fantastic second place in the SRC Challengers, five points behind Alasdair Graham and Laura Stuart’s Mitsubishi.

With Iain being a former class champion in his Vauxhall Nova, his speed is not to be underestimated, and he has enjoyed a quick and consistent season so far in 2016.

He said: “The season has been really good actually. We had targets set at the start of the year which are proving tough to meet but the competition all the way through the top 20 has been exceptional this year.

“For me the highlight so far has to be the [Brick & Steel] Border Counties. We lost quite a bit of time with a front puncture on one of the stages but that didn’t spoil a fantastic event with terrific stages. One of the best rallies I’ve done.”

For the rest of the season, Wilson and Riddick are looking to improve on what they have achieved so far, and do not want to lose their record of making the finish of each event.

Wilson said: “The next two rallies are just a case of trying to better our scores and see what happens. We have been lucky enough to have finished every event so far without any real problems so we are in reality a little higher than we may end up as dropped scores need to be taken into account.

“We can only try to keep finishing events and hope for slightly better results. Our position in class 11 [2nd] is pretty decent so that’s something else to improve on.”

After taking a sabbatical from the SRC in 2015 to get some event time in his Subaru, Wilson is back for 2016 and has enjoyed himself so far.

He said: “Overall the stages have been good. The Border Counties was exceptional and the [McDonald & Munro] Speyside was also in good condition. We ran all but one stage of the [Arnold Clark Jury’s Inn] Snowman, contesting its slippery stages with a temperamental front diff was scary as hell!

“The [RSAC] Scottish is one of my favourite events and it suffered a little with the extra BRC traffic but I’ve rallied on much worse south of the border so I won’t complain.”

Wilson’s Impreza is undoubtedly a quick car, but unfortunately it is unlikely to get any quicker any time soon.

Iain explained: “I can’t really see us managing to make any upgrades to the car for the remainder of the season. It is an excellent car and so well built. It could do with going on a diet, just like me, but neither of those things are going to happen!

“Colin Telfer Engineering have done a great job of looking after the car for me this season on what has to be a controlled budget and he [Colin] has played a big part in our 100% finish rate this year.

“This will more than likely be our last year in such a good car before trying something else so we’ll continue to give it our best shot.”

Wilson and Riddick are eligible for the SRC Challengers, which is for drivers who have not finished within the top 10 of an MSA event within the last 10 years, and, according to Wilson “gives us lads that can’t live with the front boys something real to aim for.”

With two rallies to go, they lie just five points from the top of the standings thanks to their consistency. Iain is aware however that he may not finish quite as high as second.

He said: “It’s great to be sitting where we are in the Challengers but as I said this will change quite a bit when the drop scores are applied.

“We will give it our all though as all it takes is one or two bad results for others and we could be in the mix. All you can do is try your best as the other cars around you will be doing the same. My navigator Keith Riddick won’t let me relax at any point, that’s for sure!”

The next round of the 2016 ARR Craib MSA Scottish Rally Championship is the Coltel Grampian Stages, based near Aberdeen, on 13 August.