Mutch and McDonald have “enjoyed every minute” 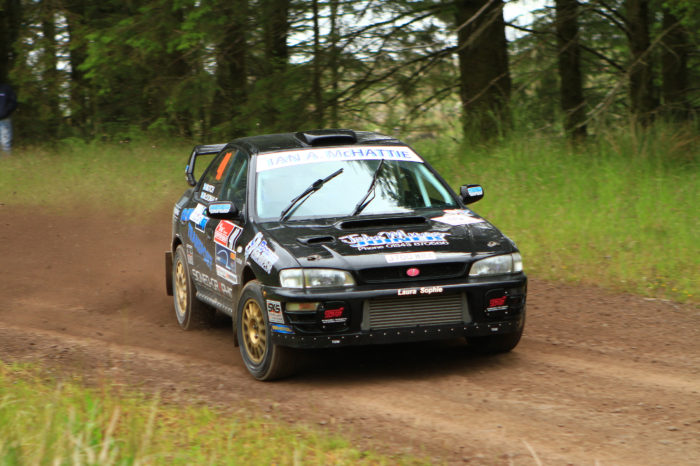 Elgin duo Scott Mutch and Greg McDonald have been one of the most impressive crews of the 2016 ARR Craib Scottish Rally Championship.

Competing in an older GC8 specification Subaru Impreza, Mutch is one of the least experienced drivers in this year’s SRC but you wouldn’t know it based on some of the speed he has shown.

Speaking about his season, Scott said: “It’s been not too bad, we’ve had a few ups and downs but we have enjoyed every minute.

“I thought at the start of the year if we could get into the top 20 we would be doing ok and anything better would be a bonus.”

After four gruelling gravel events, Mutch and McDonald find themselves lying 18th overall in the championship, ninth in the SRC Challengers and equal first in the www.usedcarparts.co.uk Subaru Cup, which was introduced in 2016 for Mk1 Subaru Impreza models to bring the cars, which are less technologically advanced than their younger cousins back out on the stages.

However, their championship position both overall and in the Challengers, for drivers who haven’t finished in the top 10 of an MSA event in the last 10 years, belies the true pace they have shown this year in their older car.

Despite the speed though, the results haven’t always come together for one reason or another.

Asked whether he was frustrated about this or proud to have shown what he is capable of, Mutch said: “There are a mixture of feelings on that one! It was obviously really frustrating at the [Brick & Steel] Border Counties to not get the result, especially when we found out we were running as high as ninth overall.

“However we are happy we were as high as that in the first place when you consider the drivers and cars we were up against.”

Mutch is one of many drivers who is competing this year in the SRC Challengers as well as the Subaru Cup, and he is full of praise for the new series’.

He said: “I think it’s great that we have these championships because it gives people like myself, who don’t have big budgets to spend, something to aim and fight for throughout the year.”

There are only two rounds left in this year’s Scottish Rally Championship, the Coltel Grampian Stages (13 August) and the Galloway Hills Rally (10 September). However, Mutch will not be at the season finale in Castle Douglas as co-driver Greg McDonald’s wedding clashes with the date of the rally.

This means the pair will be putting in almighty effort on the Grampian next month.

Scott said: “Due to a limited budget we are unsure what next year will allow us to do so we are really going to put in a push on the Grampian and try to get in the top 10 again. That is the aim.”

The next round of the 2016 ARR Craib MSA Scottish Rally Championship is the Coltel Grampian Stages Rally, based near Aberdeen, on 13 August.