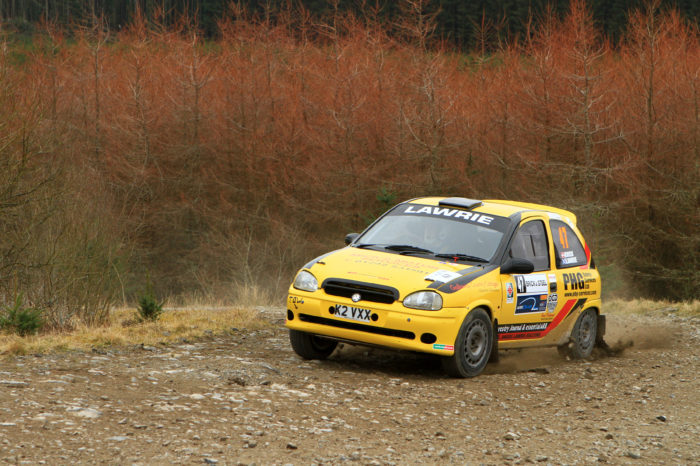 The Castle Douglas driver currently sits at the top of the class 2 standings and not far from points’ leader Grant Inglis in the Scottish 2WD Championship.

Commenting on his season so far, Angus said: “So far this season has been very good despite the disappointing retirement on the [McDonald & Munro] Speyside Stages with gearbox failure.

“Thanks to the support of our sponsors the expensive repairs were able to be done and ensure we could continue to achieve our aim this year!

“For the remaining rallies we need to continue the results we are achieving just now, always trying to end each rally a place higher in the results. But, we need to be realistic and remember the car is only a 1400 [cc].”

Lawrie and his co-driver Paul Gribben are doing well in two different championships, but the class 2 championship remains the priority for the pair.

Angus said: “For the remainder of the season we need to continue the campaign for class 2 honours, this being our main goal.

“The 2WD championship is certainly very positive for us just now, but again with only a class 2 Vauxhall Corsa a top 5 finish in the championship would make me very happy, although achieving a top 3 would be incredible!”

Despite Lawrie’s Corsa being slightly underpowered compared to its closest challengers in the Scottish 2WDs, Angus ensures that the car is as good as it can be, with a special trip planned for later in the year.

He said: “The car is now at a stage that it should be reliable and ensure it’s only down to the driver to make sure it crosses the finish line.

“All year we have made small improvements to fine tune the car, such as suspension and the handling. Plans are in motion for a trip to Mull this year so saving on any costly improvements is essential and focus on the maintenance of the car is the priority.”

Paul Gribben has been in the co-drivers’ seat in Lawrie’s Corsa for the Speyside and the [RSAC] Scottish, but Dane Jeanette Kvick was alongside for the start of the season for the [Arnold Clark Jury’s Inn] Snowman Rally and the [Brick & Steel] Border Counties.

Lawrie said: “Having Jeanette Kvick co-driving at the start of the season certainly yielded a positive start to the season with high hopes for me to chase.

“Paul and I are going to carry on and finish the season together. Having Paul on-board as a navigator, friend and a very kind sponsor from PHG Safety Services LTD means the team relationship within the car is superb, which has definitely part of our recent success.

“I’m lucky to have had both Jeanette and Paul with me this year. It’s certainly helped my career.”

Lawrie is in fine form heading into the final two rallies of the year, but cites his last SRC event, the Scottish, as the highlight of his season so far.

He explained: “I would say the Scottish was one of the season highlights. As well as the overall result, looking at the stage times against the BRC competitors made Paul and I really happy and positive in success for what plans may develop for the 2017 season.”

The next round of the 2016 ARR Craib MSA Scottish Rally Championship is the Coltel Grampian Stages, near Aberdeen, on 13 August.