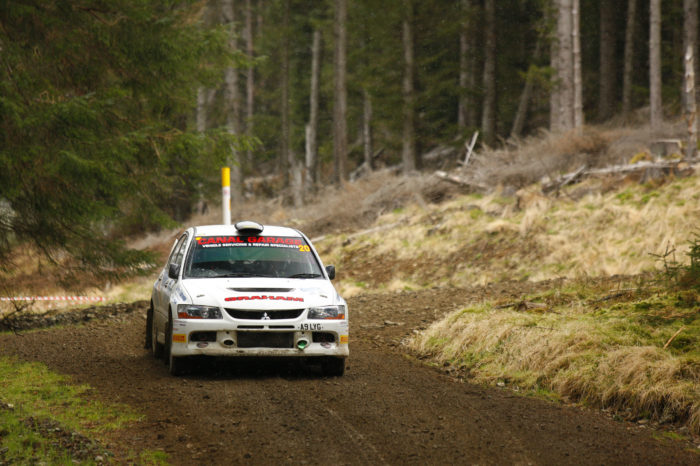 Paisley driver Alasdair Graham and co-driver Laura Stuart from Alford have all things considered had a fantastic two thirds of the 2016 ARR Craib Scottish Rally Championship in their Mitsubishi Lancer Evolution IX.

The car, which is a Group N specification Lancer, is new to Graham this year after he stepped up from his Vauxhall Corsa, and the partnership between him and his Mitsubishi is yielding strong results.

Alasdair said: “The season is going very well; it’s the most consistent and successful season since we started 8 years ago.

“It’s going amazing and the vast majority of that is down to the car. It hasn’t been the easiest transition to make [from the Corsa to the Evo] but it is working in our favour making this season one of the best we have had.

“My highlight so far is probably our performance at the [Brick & Steel] Border Counties. Our times were good and the car ran faultlessly, and finishing 12th overall was a great achievement for us.”

After four of the six rallies, Graham and Stuart are lying 11th in the overall standings, top of class 10 for Group N cars and also top of the SRC Challengers, for crews who haven’t finished in the top 10 of an MSA event in the past 10 years.

Drop scores are still to be considered, but the battle for the SRC Challengers is set to go right down to the wire, and is providing great excitement and reward for those who aren’t fighting for the podium places.

Graham said: “Obviously I would be over the moon to win the SRC Challengers cup, but there’s still two rallies to go and anything can happen. I’m just enjoying being involved in the competition.”

Graham and Stuart’s impressive results have come despite facing the challenge of adapting to an all new car and driving style in 2016, as Alasdair explains.

“Moving from the Corsa to the Evo has been a challenge for so many reasons.

“Firstly, changing braking points because the car is so much heavier and coming up to corner that bit quicker has affected us this year as I’ve had to get used to a totally different driving style.

“With every rally Laura and I are getting more used to the four wheel drive and the changes we’ve had to make so I think we’ve improved a lot and we’re just hoping that continues.”

For the rest of the season, the pair are looking to continue their fine form and hopefully pick up a few accolades.

Alasdair said: “Laura is sitting high in her classes and I would love to see her finish in the ladies and co-drivers. We’re also hoping to finish well in the last two rallies and taking class 10 would be the icing on the cake… if we can stay ahead of Fraser [Wilson]!”

The next round of the 2016 ARR Craib MSA Scottish Rally Championship is the Coltel Grampian Stages, near Aberdeen, on 13 August.