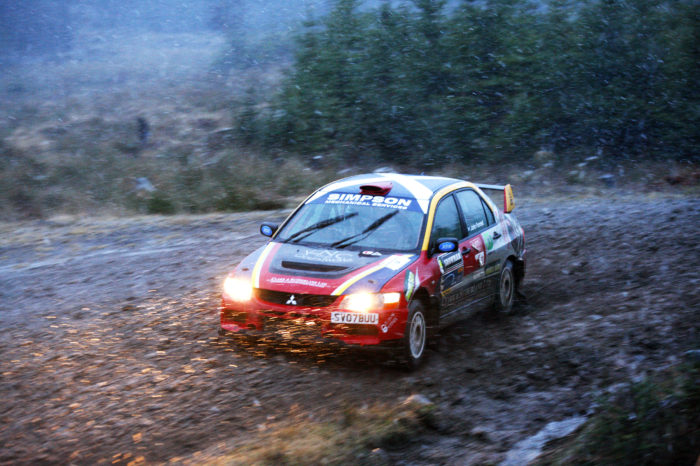 Competing in a Mitsubishi Lancer Evolution IX like many others, the duo have of eight place on the opening round of the season, the Arnold Clark Jury’s Inn Snowman Rally on their way to 14th in the championship and sixth in the SRC Challengers, where they claimed a win on the Brick & Steel Border Counties.

However, two off road moments on both the McDonald & Munro Speyside Stages and the RSAC Scottish Rally have compromised their season a little.

John said: “We are really enjoying the season so far. Each and every event has been well organised and leaving each event I just can’t wait for the next one.

“We are looking to try and have two clean rallies in the final third of the season. We had a small off on the final mile of the Speyside which dropped us out of the top 10 and then had quite a big accident on the last two miles of the Scottish so I need to try and compose myself to take the car to end cleanly.”

The mistake Wink made in the final couple of miles on the Scottish was rather more serious and spectacular than the one he made on the Speyside.

“We had lost our place in the notes and got caught out with deceptive right 6, stupidly I was driving too quickly for not knowing where I was,” John explained.

“Unfortunately the biggest pile of logs in Dumfries was on the side of the road which we hit head on at 60mph, which rolled the car. The damage was fairly major but the shell is now back and the rebuild is getting there. We’ve had a lot of help from lots of people so far and that’s a great testament to the rallying community.”

The SRC Challengers is new for the 2016 SRC and drivers who have not finished in the top 10 of an MSA event in the past 10 years are eligible for the separate championship. It is thrilling plenty of drivers, and John Wink is no different.

He said: “The Challengers has been awesome this year. It allows competitors within the same kind of budget range to almost have their own rally. There’s a whole group of us at the same pace, and going into each stage you know it could be any one of us who could take the stage win. It’s very exciting.”

Their Mitsubishi has performed well this year, with a certain triple Scottish Rally Champion looking after it. After John has gained more experience, he may look for some upgrades for 2017.

He said: “The car has been brilliant. Ken Wood has been looking after it so it gets a good going over prior to every rally.

“The car is a fairly standard spec with a standard engine. We have upgraded to a dog-legged gearbox which is helping us not lose too much time with the gear changes. Once we get a few more rallies under our belt, we’ll maybe look at some upgrades over the winter.”

Wink and Forrest are relatively new to rallying, which makes their performance and pace this season all the more impressive. They still have lots to learn but are having a blast as they progress.

Wink said: “This season has been a steep learning curve. Our pace has improved and John and I are working hard to try and match the notes with our pace. We’ve only ever rallied together and this is our second full season so it’s all very much still a learning process.

“Next year we’ll be concentrating on consistency and tidying up mistakes made which are still costing us a lot of time over the course of a whole rally. All in all though we’re having a hoot!”

John will next be in action on round 5 of the 2016 ARR Craib MSA Scottish Rally Championship, the Coltel Grampian Stages Rally in Aberdeenshire. The 40 mile event starts and finishes outside the picturesque Crathes Castle, Banchory.